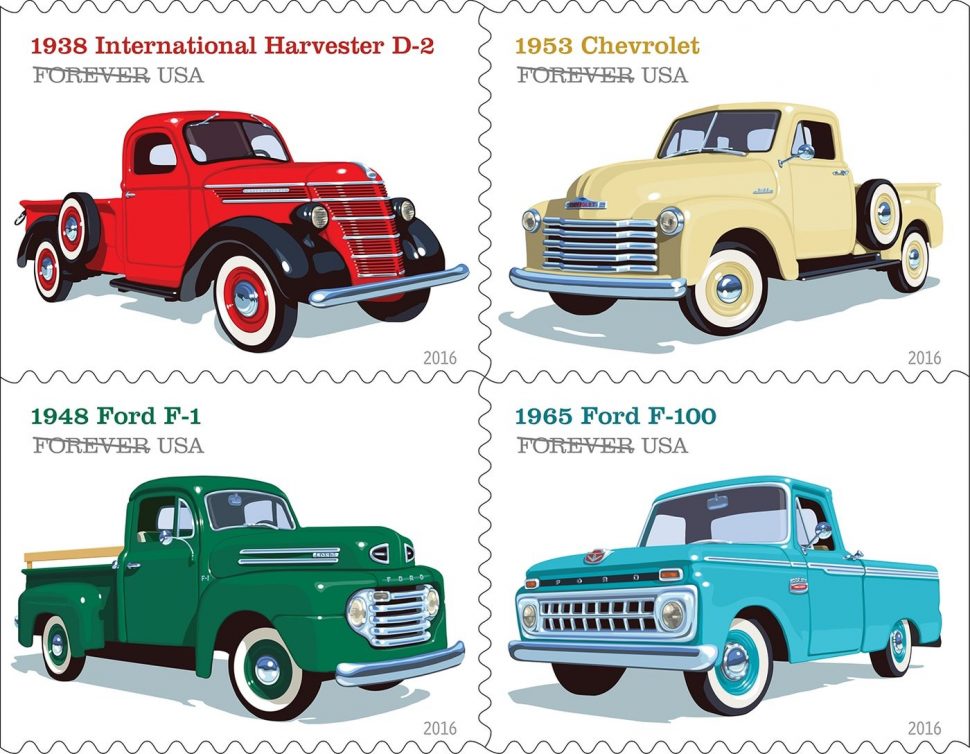 After honoring hot rods and muscle cars with a series of Forever stamps (not to mention domestic cars of the 1950s with a variety of first-class stamps), the USPS’s latest line of Forever stamps will pay tribute to the most American vehicle of all, the pickup truck. The United States Postal Service has a thing for old cars.

With artwork created by Chris Lyons, the four Forever stamps will honor the 1938 International Harvester D-2; the 1948 Ford F-1; the 1953 Chevrolet Advance-Design; and the 1965 Ford F-100. As with earlier automotive tribute stamps, the vehicles chosen are representative of a broad cross section, though some would argue that milestone vehicles were overlooked. Ford’s 1925 Model T runabout with pick-up body, considered by many to be the first factory-produced pickup (as earlier examples were generally cab chassis fitted with beds), isn’t one of the offerings, and neither is the 1955-’58 Chevrolet Cameo Carrier, arguably the first “luxury” pickup. 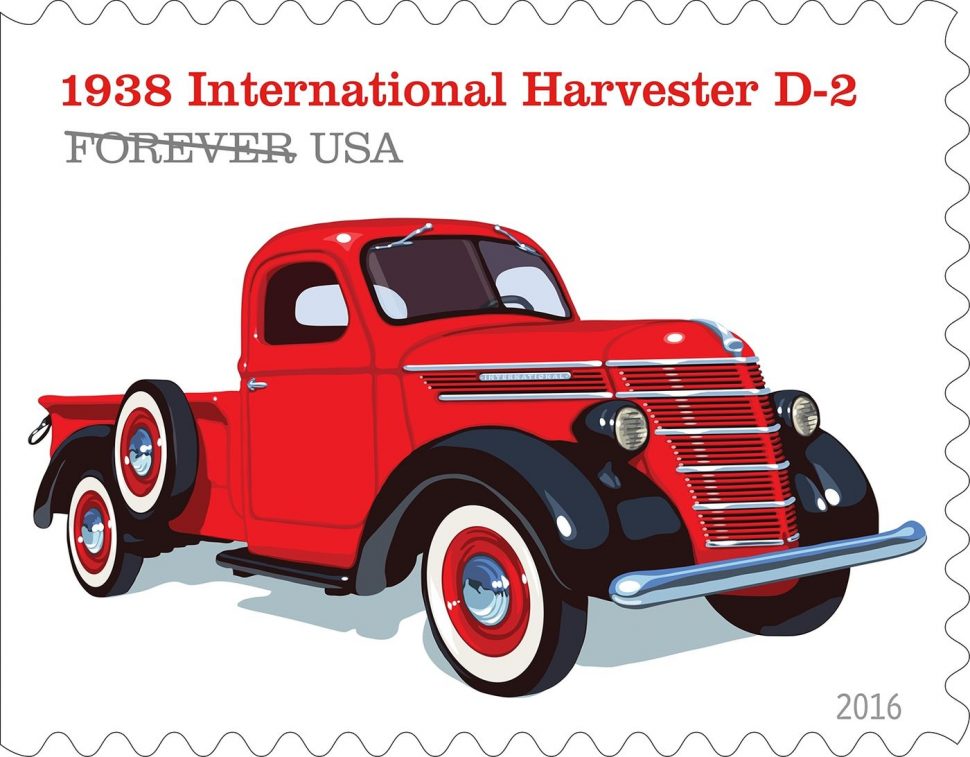 That’s not to say the selections weren’t worthy of recognition. The 1938 International Harvester D-2 may well have been the first pickup to emphasize styling along with utility, from its barrel-shaped grille with flowing, chrome-trimmed vents (in the finest Streamline Moderne style) to its V-shaped two-piece windshield and its crowned, pontoon-style fenders. America may not have fully emerged from the grips of the Great Depression, but the D-2 must have been a sign that better days were on the horizon. 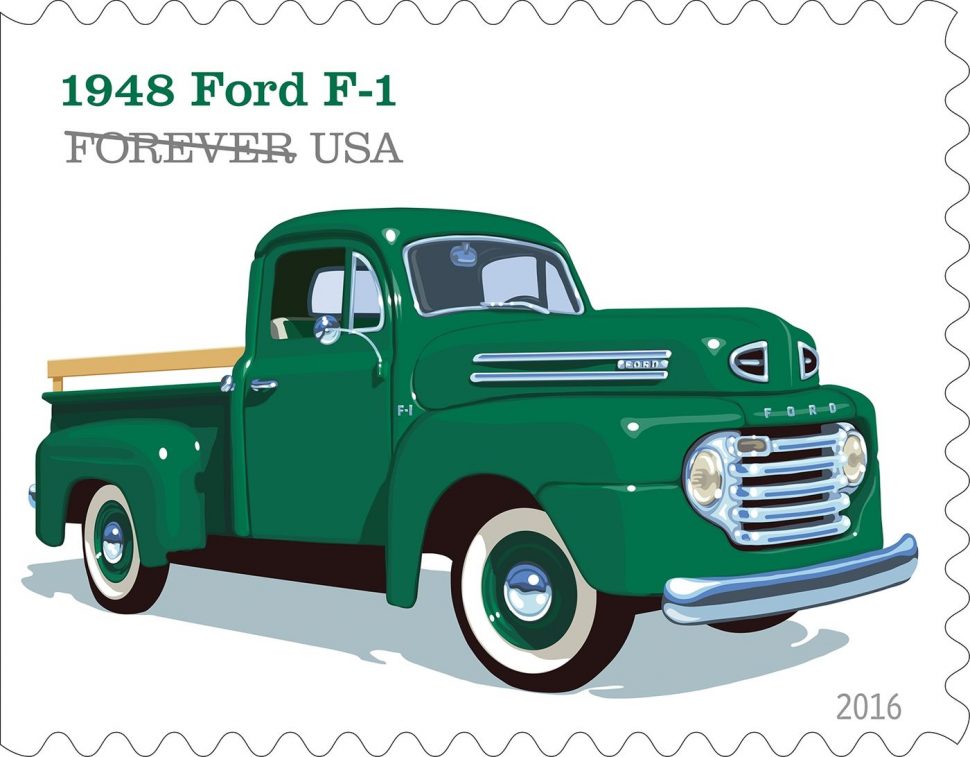 The 1948 Ford F-1 represented the brand’s first all-new truck following the Second World War, and its “Million Dollar” cab featured more room, improved outward visibility and a suspension system that used rubber pads and bushings to reduce noise, vibration and harshness. The changes struck a chord with consumers, who purchased a total of 301,791 Ford trucks during the 1948 model year. 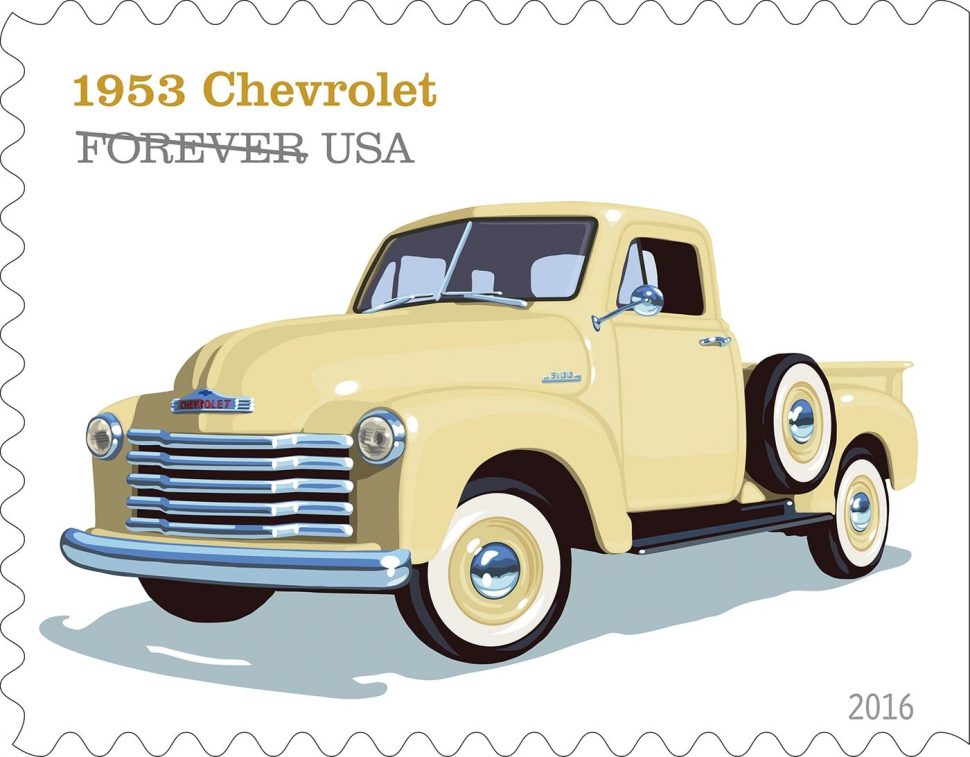 Chevrolet’s Advance-Design models debuted for the 1947 model year, becoming the first postwar pickup introduced and thus giving the bow-tie brand a significant marketing advantage over its competition. Wider, lower and longer than the models they replaced, the Advance-Design pickups proved so popular with consumers that Chevrolet made very few external changes between 1947 and 1953. Perhaps it’s fitting, then, that the USPS would honor the final year of the model’s original postwar styling instead of its first market year. 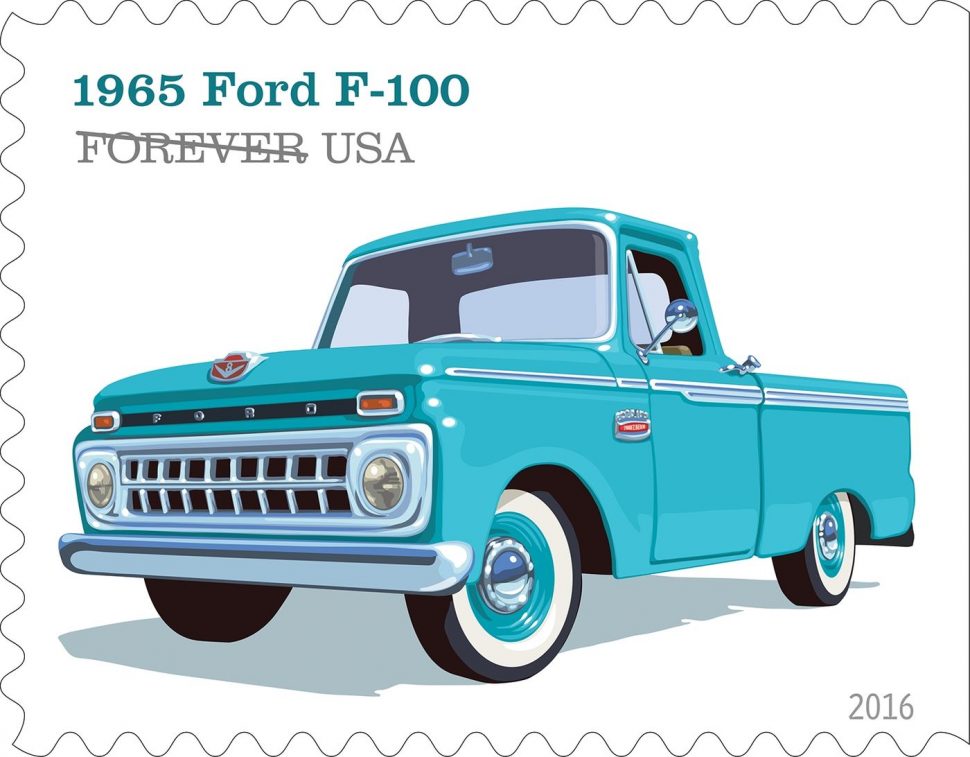 Though Ford’s F-100 pickup had been on the market since the 1953 model year, the pickup had gone through three generations of styling by the time the 1965 model was introduced. The big news for 1965 was the introduction of a new chassis using a Twin-I-Beam independent front suspension that promised to deliver a smoother ride than ever before. The design proved so effective that variations of the Twin-I-Beam suspension were used on Ford F100 (and later, F-150) pickups until the 1996 model year.

The Pickup Trucks Forever stamps will debut on July 15 at 1:00 p.m. at the Syracuse Nationals, held at the New York State Fairgrounds in Syracuse, New York. Following their release, the stamps will be available at post offices (and at USPS.com) in books of 20, and will be valid for first class postage regardless of future rate increases.