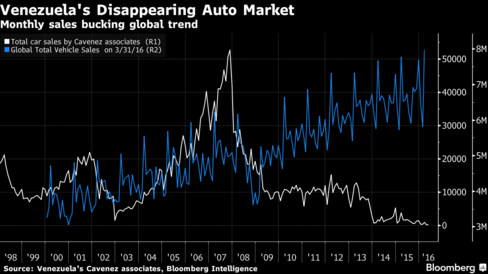 Toyota plans to restart production lines in August, offering Corolla, Hilux and Fortuner models, spokesman Luiz Carlos Andrade Jr. said via e-mail. Fiat Chrysler reached an agreement with the government last week, and GM is planning to begin assembling some models locally next month, according to people with knowledge of the talks who weren’t authorizedjimwatchesalto speak about the companies’ plans.

Fiat Chrysler Automobiles NV, General Motors Co. and Toyota Motor Corp. are close to resuming manufacturing in Venezuela after the government allowed them to sell output in dollars.

The arrangement is similar to one Ford Motor Co. reached last year in which Venezuelans pay Ford dealers up front in a dual-currency plan: dollars for production materials, which are imported from abroad, and bolivares to cover the costs of assembling their vehicle locally.

Venezuela has been buffeted by the global collapse in commodity prices. As petrodollars dried up, automakers were unable to import parts for assembly in Venezuela or repatriate their earnings. Across the whole economy, local production has been stymied and imports have been curbed, causing chronic shortages of food and many basic staples.

General Motors and an official at Venezuela’s Information Ministry declined to comment on the prospective agreements, while local spokesmen for Fiat weren’t immediately available.

Despite the prospective deal, production levels have continued to slump to all-time lows in the OPEC-member nation. According to Venezuela’s automobile chamber, Cavenez, 1,227 vehicles were produced in the country through May this year, the majority by Ford.

Those involved in the recent negotiations say agreements were slow to close as automakers sought to lift tight energy regulations implemented under late President Hugo Chavez, and roll back taxes across the industry.