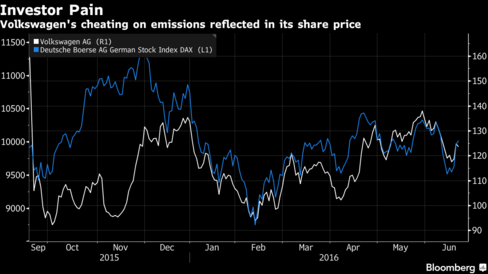 Poetsch received a tongue-lashing from investors for his shift last year from chief financial officer to the head of the supervisory board, which has oversight over top management. Underscoring the sour mood, some investors asked to have Stephan Weil, Lower Saxony premier and VW board member, take over the meeting. The motion was turned down.

Volkswagen AG Chairman Hans Dieter Poetsch bore the brunt of investor dissatisfaction over the automaker’s handling of the emissions cheating scandal during a raucous shareholder meeting, with some even trying to remove him as host of the gathering.

“You are a conflict of interest personified,” said Markus Dufner, managing director of the German Association of Ethical Shareholders.

Replica Cartier WatchesDufner and other shareholders expressed deep reservations over having Poetsch oversee the cleanup of a scandal that began while he was CFO. VW managers faced a grilling this afternoon from shareholders over how the crisis unfolded and their response. The meeting is likely to drag into the evening, with many institutional investors encouraging owners not to ratify the actions of the management and supervisory boards in what would essentially be a vote of no confidence.

“I see a massive conflict of interest if he leads the investigation of the diesel affair,” Hans-Christoph Hirt, co-chief executive officer of shareholder advisory group Hermes Equity Ownership Services Ltd., said of Poetsch.

Shareholders tried twice in the first 4 1/2 hours of the gathering, which often descended into shouting and arguing, to unseat Poetsch as meeting chairman. Investors questioned when they would get full information on the crisis, bemoaned the job management has done reacting to it and expressed doubt about Volkswagen’s ability to turn itself into a electric-car maker with the latest in autonomous technology.

“The crisis is a crisis of trust,” said Gerd Kuhlmeyer, who represents a coalition of employee shareholders and described seeing tears in VW workers’ eyes over the crisis. “Customers’ trust has been lost and needs to be won back, and so must the trust of investors.”

Poetsch said VW was still recommending that owners approve the actions of the two boards, despite a new market manipulation investigation announced by German authorities on Monday. The vote has limited legal implications. Institutional investors hold non-voting preferred shares, while the voting stock is mainly in friendlier hands.

The Porsche and Piech families, descendants of the creator of the VW Beetle, own 52 percent of the common shares. Porsche SE, the holding company for the family’s stake, is sticking with a recommendation to exonerate Volkswagen’s management and supervisory boards. Wolfgang Porsche, a supervisory board member, came to Poetsch’s aid in helping to beat back efforts to remove him as the meeting chairman.

Joerg Hofmann, head of labor union IG Metall and deputy chairman of the supervisory board, also defended Poetsch, saying at the meeting that he is the only person who has the support of workers and enjoys the trust of major shareholders.

The German state of Lower Saxony holds 20 percent of the voting stock and has special rights, along with workers, that are enshrined in Volkswagen’s bylaws. The supervisory board was split over the recommendation to approve management’s actions, Frankfurter Allgemeine Zeitung reported, citing unnamed company sources.

Public shareholders “have never fared worse compared to the other VW stakeholders,” Ulrich Hocker, a representative of German shareholder association DSW said in a speech. “I only have one description for this: total failure.”

The automaker has been hit in recent days by another barrage of negative news, with a settlement with U.S. authorities over the cheating being delayed until next week, shareholders filing another suit against the automaker and the new allegations emerging in Germany.

On Monday, Braunschweig prosecutors opened a probe into whether former CEO Martin Winterkorn was too slow to tell investors about the potential cost of rigging diesel cars to pass emissions tests. Herbert Diess, head of the VW brand, is also being investigated.

Volkswagen said the investigation doesn’t involve new facts or revelations and had previously argued that the company informed investors properly based on the information available at the time.

The California State Teachers’ Retirement System claimed on Tuesday that VW misled investors about emissions, seeking damages that could reach as high as 700 million euros ($790 million) if other investors agree to join the action. Another 278 institutional investors sued in March, seeking 3.3 billion euros in a lawsuit over the timing of market disclosures. Volkswagen has so far set aside 16.2 billion euros for the scandal, including repairs, legal costs and fines.

“We had hoped to invest in a world market leader but invested in a world costs leader,” said Alexander Scholl, a representative for Deka Investment who speed-read his statement after Poetsch limited speaking time for each shareholder to 5 minutes. His comments elicited whoops of support from fellow investors.