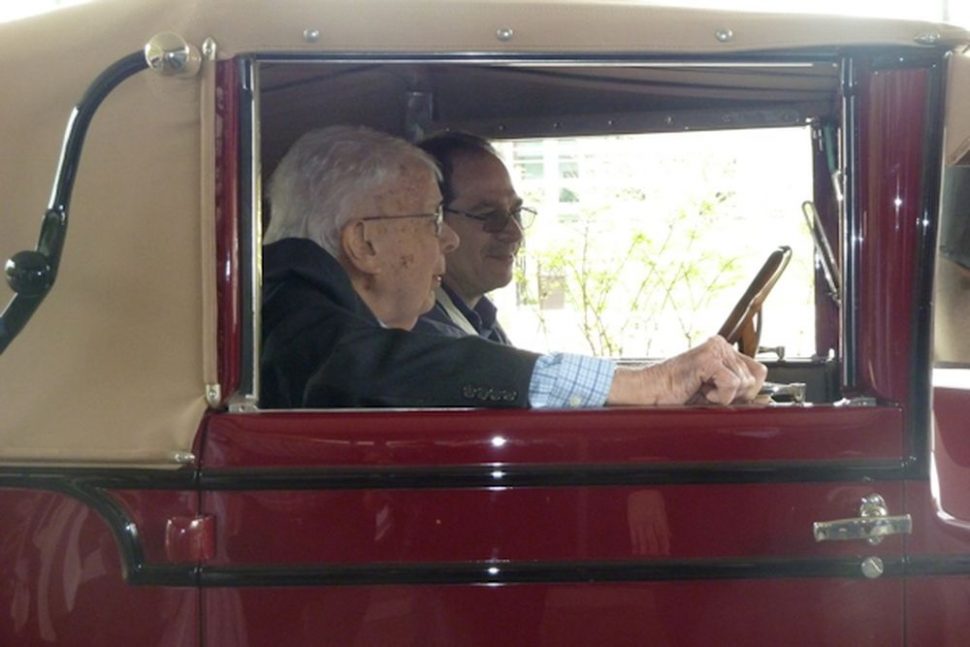 Of course I said yes. As director of the Wills Museum, how could I possibly turn down a request for such an important event.

Long time Wills Sainte Claire Museum member Bill Mason’s son, Rick, emailed me earlier this year and asked if I could attend and represent the Wills Museum at his father’s 100th birthday party in Lansing, Michigan, about a two-hour drive from the Wills Museum in Marysville.

Bill Mason has been a member of the Wills Sainte Claire Club since it began in 1959. In fact, Bill’s involvement with Wills Sainte Claire goes back a long time further. In the mid-1920s, when Bill was just a tyke, he remembers the local Wills Sainte Claire distributor sending over a Wills roadster for his father (who owned a commercial meat processing company) to try out for the weekend. Bill made sure that every time the car went anywhere, he was riding in the rumble seat! Unfortunately, his father did not buy the Wills, as he had just purchased a different brand of car. But Bill never forgot those wonderful rides in a Wills Sainte Claire car.

In June of 1930, he sent a letter to C. Harold Wills, who built the Wills cars from 1921 to 1926 in Marysville, Michigan, requesting a brochure of the Wills cars. The Wills Sainte Claire Automobile company had gone bankrupt in 1926 after building 12,000 cars, but to his credit, Mr. Wills had saved one last brochure. Mr. Wills wrote back to 14 year old Bill and said: “Dear Sir, As requested in your letter, I am very happy to send you a catalog showing you the different models of the Wills Sainte Claire car, which happens to be the only one I have. Trusting that this will meet your pleasure, (signed) C. Harold Wills.”

But Bill always had those fabulous Wills cars in the back of his mind and would eventually go on to become a Wills car owner by purchasing a 1926 Phillips-bodied Cabriolet. His son and daughter told me they had fond memories of riding around in the rumble seat of the Wills Cabriolet when they were kids. As happens in life, family comes before antique cars, and Bill had to sell the Wills to pay for his children’s college educations.

Bill was a member and stayed in close contact with the Wills Club (started in 1959), which eventually became the Wills Sainte Claire Auto Museum, and often sent in articles and information, sharing his vast knowledge of all things Wills through the Museum’s Newsletter. 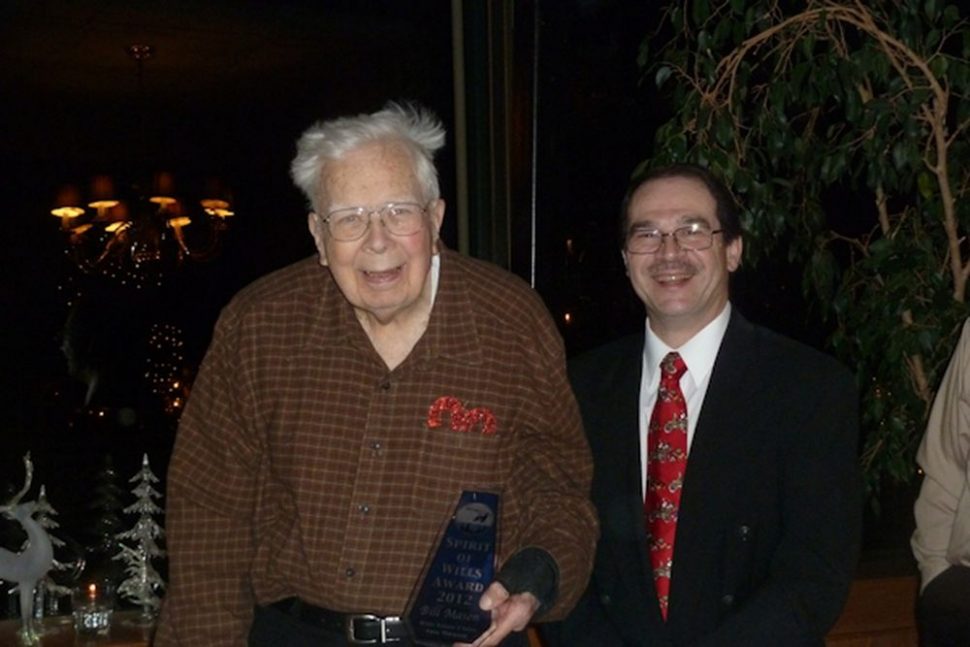 In 2012, Bill was awarded the “Spirit of C. H. Wills” award by the Board of Directors of the Wills Museum for his many contributions to the Museum. The “Spirit of C. H. Wills” Award is given in tribute to the spirit that propelled C. Harold Wills and the Wills Sainte Claire automobile to the forefront of automobile quality and engineering. This award is given by the directors of the Wills Sainte Claire Automobile Museum to a member who has reflected this spirit in their service to the Museum over the previous year.

As I began thinking about the trip to Lansing to celebrate with Bill and his family, I thought it would be a good idea if I could bring a Wills Sainte Claire car with me to have on display. No problem, I have a Wills Roadster and I could easily bring it to the party. Then I considered it further and thought, it would be really fantastic if I could bring the car that Bill used to own. Bill’s Wills Cabriolet was purchased and restored by Ray Burgess, who gave it one of the finest restorations ever lavished on a Wills, and the Wills just happened to be on display in the Wills Museum. I called Ray in Florida and asked him what he thought about me taking his valuable Wills Cabriolet to Lansing for a birthday party for Bill. Ray, as gracious as a gentlemen can be, said “I think it’s a great idea!”

As sometimes happens with antique cars that have been sitting for a while, the Wills Cabriolet did not want to be cooperative in starting the engine. As you can imagine, there are not many Wills engine specialists in the world, but fortunately for us, Scott Shepley of Blue Gryphon Service, whose business is a short distance from the Museum, dropped everything he was doing to come to our aid. Because of Scott’s mechanical prowess, he diagnosed the problems and in short order had the car running well. With the Wills safely loaded in the trailer, off we went to Lansing. 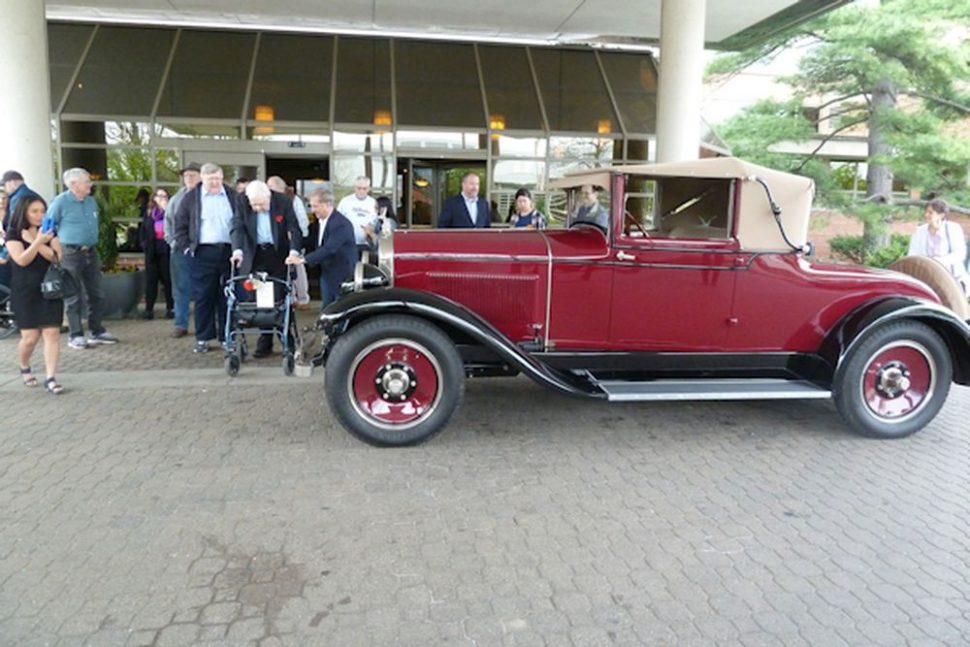 Bill’s 100th birthday party was well attended by his many family and friends. Bill’s son, Rick, created a wonderful slide show of Bill’s life and accomplishments, and many photos included his Wills Sainte Claire. As dessert was being served, my wife and I slipped out of the dining room and unloaded the Wills Cabriolet from our trailer, placing it under the portico of the facility. After lunch, Bill made his way out side, for what his son Rick told him was a “special surprise.”

Bill’s eyes lit up when he saw his old car! Then a smile appeared on his face, that for me, made the whole trip immensely satisfying. Bill looked the car over and began reminiscing about the outings and memories of trips with his wife and family in the car. I asked Bill if he would like a ride in the car. Another big smile on his face told me the answer was yes. It is not easy to get into a car made in the 1920s at any age (especially if you are tall) and when you are 100 years old, you certainly don’t bend as well as you used to. But none of this stopped Bill. He worked his way into the tight interior of the Wills and we were shortly ready to go. As we drove along, Bill told me about the sounds that the engine and transmission made as we shifted gears were just as he had remembered them many years ago. 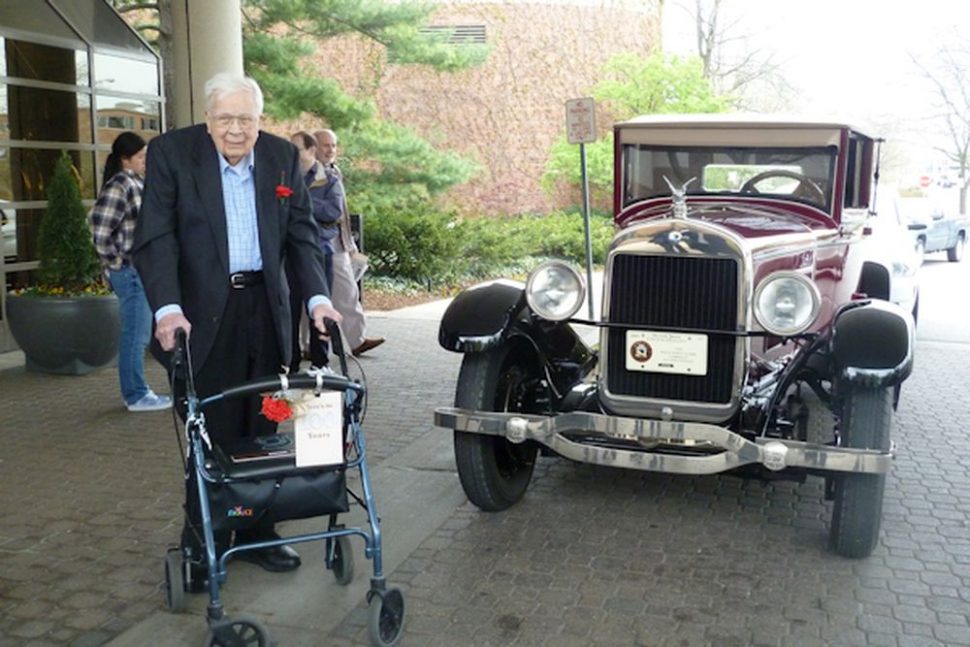 Happy 100th birthday to you, Bill Mason, and many more!