You are here: Home  /  Auto Tech  /  Now Your Car’s Been Studying You Closely and Everyone Wants the Data
Auto Tech 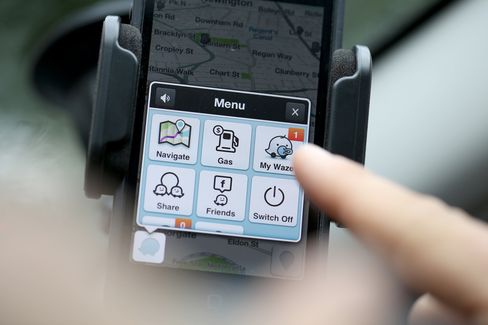 Fire up a new model and it updates more than 100,000 data points, including rather personal details like the front-seat passenger’s weight. The navigation system tracks every mile and remembers your route to work. The vehicular brain is smart enough to help avoid traffic jams or score parking spaces, and soon will be able to log not only your itineraries but your internet shopping patterns. As you may have suspected, your car is spying on you.

The connected car will be a wonderful convenience or an intrusive nightmare, depending on your tolerance. For automakers, it could be a gold mine, which is why the industry is building firewalls to keep the likes of Google Inc. and Apple Inc. at bay — and hoping to pry you away from their phones and apps when you’re motoring.

“Everyone is trying to control the screens in the car,” says Tony Posawatz, chief executive officer of the consulting firm Invictus iCar and one of the developers of the Chevrolet Volt. “There is tremendous value in the data, and they are trying to figure out how to get it.”

The dashboard battle is gearing up as cockpit technology rapidly advances. Once self-driving cars are the norm, people will have the downtime to become truly mobile consumers. (Granted, that may seem farther away after the recent death of a Tesla Model S owner who was using its Autopilot system.) Ford Motor Co. and others are already angling to give the Googles of the world limited to no access to the juiciest data that will be amassed once millions of people are shopping in seat belts.

For a QuickTake explainer on driverless cars, click here.

“We’re not in a position of turning over our vehicles to a Google or Apple experience,” says Don Butler, Ford’s executive director for connected vehicles and services. “We want to make sure our customers have a chance to give informed consent” on how details about their habits are used. “And,” he adds, “we want to share in any value created.”

Ford, BMW AG, General Motors Co. and others have developed or purchased special systems that can host and supervise apps from outsiders. Many brands, including Chevrolet and Ford, have elected to allow drivers to pipe in systems created by Apple and Google — Apple CarPlay and Android Auto — without giving the tech companies entree to driver’s personal information or vehicle diagnostics. (It goes both ways: For example, since CarPlay’s mapping, messaging and audio offerings are largely operated by the phone itself, whatever its apps know isn’t readily available to the car’s computer.)

Ford’s answer is called AppLink, which Toyota Motor Corp. also uses; it enables the car to work with 90 phone apps without using CarPlay or Android Auto. If drivers choose, they can link those operating systems to vehicle screens without tech competitors being able to mine vehicle data.

As for BMW, Daimler AG and Volkswagen AG, they teamed up last year to buy Nokia Corp.’s digital mapping business, called Here, for $3.1 billion. Alibaba Group Holding Ltd., whose YunOS connects phones, tablets and smartwatches, is working on deals with Chinese automakers to hook up with vehicles too. Mazda Motor Corp. Helped fund development of a network called OpenCar, which will announce agreements later this year with other companies, says Bryan Mistele, CEO of the software company Inrix, which acquired OpenCar in March.

All the automakers, he says, “are worried about Google and Apple.”

For good reason. They’re developing cars or driverless technology themselves, and are giants when it comes to connected services. Most everyone has a smartphone at hand at all times, including while driving.

Among the dozens of apps popular with people in cars: Google’s Waze, an advertising-supported and crowd-sourced program that offers congestion-avoiding directions; Yelp, which gives locations and reviews of local businesses; and music-streaming Spotify.

If what automakers ultimately have to offer in the dash doesn’t measure up, motorists will stick with their handsets. The car companies just aren’t as good at apps and digital content as tech companies, says Eric Noble, president of the CarLab consulting firm. “What are the odds that carmakers will come out with anything that will compete with a phone? They’re chasing a rainbow.”

A spokeswoman for Google, Kaori Miyake, says the company is eager to work more with the auto industry on car connectivity. She also says Google isn’t interested in car-based consumer behavior data to use for its own advertising purposes, without specifying whether Google would like to get its hands on that to be able to sell to others. Apple spokeswoman Stephanie Saffer declined to comment beyond pointing out that the iPhone-maker’s privacy policy states that it doesn’t gather user location or behavior data, as it doesn’t generate revenue from advertising.

Waze already digs into personal data in phones and blasts pop-up ads on the screen to its 50 million users around the globe, says Julie Mossler, head of brand for Waze. The intrusiveness is why David Fuller, a contractor in San Antonio, says he deleted Waze after one day. He doesn’t like the distraction of pop-up ads, either. “That’s as bad as texting.”

It’s not only tech companies that are interested in the data. Insurers would be thrilled to have front-seat knowledge about a driver — it could charge higher rates for a proven lead foot. Ford and GM both will track such statistics and give them to insurers anonymously, allowing a consumer to contact the carrier if their driving habits will cut premiums.

When it comes to advertising, GM’s OnStar subscription service has taken a page from the tech-company model by, for example, offering dashboard-available coupons for Exxon and Mobil gas stations and the ability to book hotel rooms. Mercedes-Benz’s concierge service Mbrace can, at the touch of a button, route a driver around traffic or bad weather. Both cost about $20 a month.

GM will be careful to keep its dashboard Internet offerings related to motoring, according to Phil Abram, the company’s chief infotainment officer. “We have to be careful about what we push,” he says. “It has to be relevant to the vehicle. It’s a win-win — up to the point that it becomes spooky.”