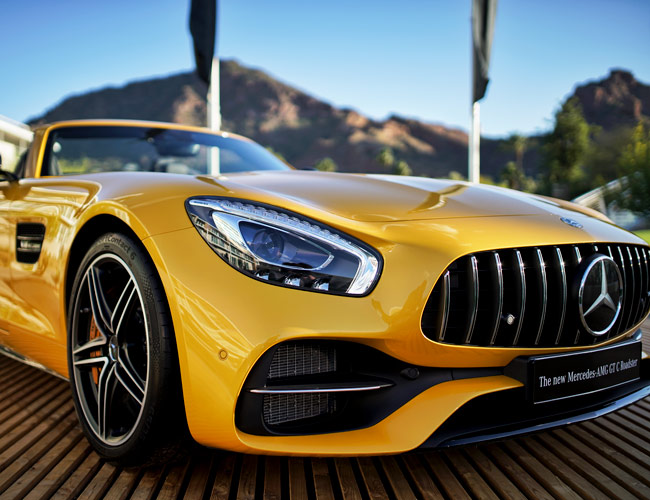 Mercedes camped out in Phoenix with its new AMG GT C Roadster for two whole weeks, sending journalists through the desert to Sedona and back in roaring herds of 20 or more candy-colored convertible supercars each day. And the police were definitely aware of our presence.

You can hardly blame the authorities for wanting to shoot some fish in a barrel. It is sort of a laughable exercise, launching the world’s motoring media force through a gauntlet of vigilant cops while testing the boundaries of cars that can bust through triple-digit speeds without breaking a sweat. But auto journos have licenses to protect just like everybody else, and while the police handed out a few citations over the period, we were able to learn a lot about the new Roadster while staying on the near side of the law. It was tempting: occasional squirts of highly combustible adrenaline were certainly injected into the growly twin-turbo AMG V8s on remoter stretches and serpentine roads, but quite a lot of fun can be had feeling the car work its magic at mortal velocities.

That the car is as much a pleasure at semi-restrained driving as it is at white-knuckle speeds owes much to its general geometry. Its front engine and acres of hood ahead give the car a chariot-like feel. Couple this with the new convertible roof — a three-layer affair that nicely insulates you from wind noise and vanishes in about 11 seconds — and you have an open-air super-sleigh pulled by 550 horses. Driving the GT C Roadster in Comfort mode feels like a steady trot on a thoroughbred that’s ready for a full gallop at any moment. And GT C delivers when you want to start stitching sharp turns together rather than glide gently between them. Active rear steering, larger brakes up front, a wider track at the rear, and the addition of a torqued-up Race mode in this model best the 476 horsepower base (non-C) Roadster’s specs, and ensure that you can push the sleigh as hard as you dare. Even with the top gone, the car still feels nice and flat in the turns, thanks to suspension tuning to accommodate the lost roof structure. That suspension tuning is necessarily stiff in the Sport and Race modes, and even in Comfort it retains a certain edge to it. So I wouldn’t quite call this a touring car — it’s a proper sports car. After 300 miles, you start to feel it. 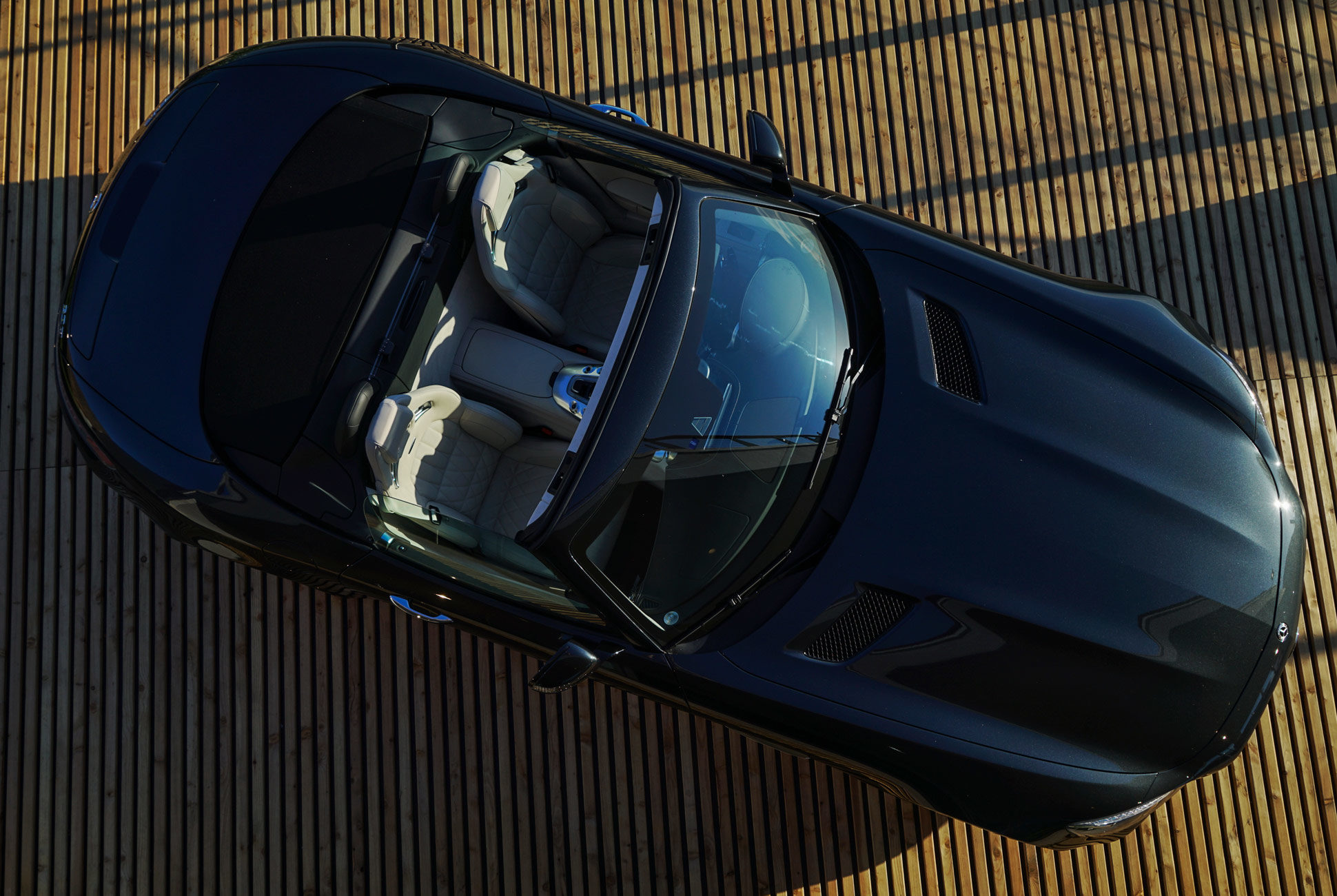 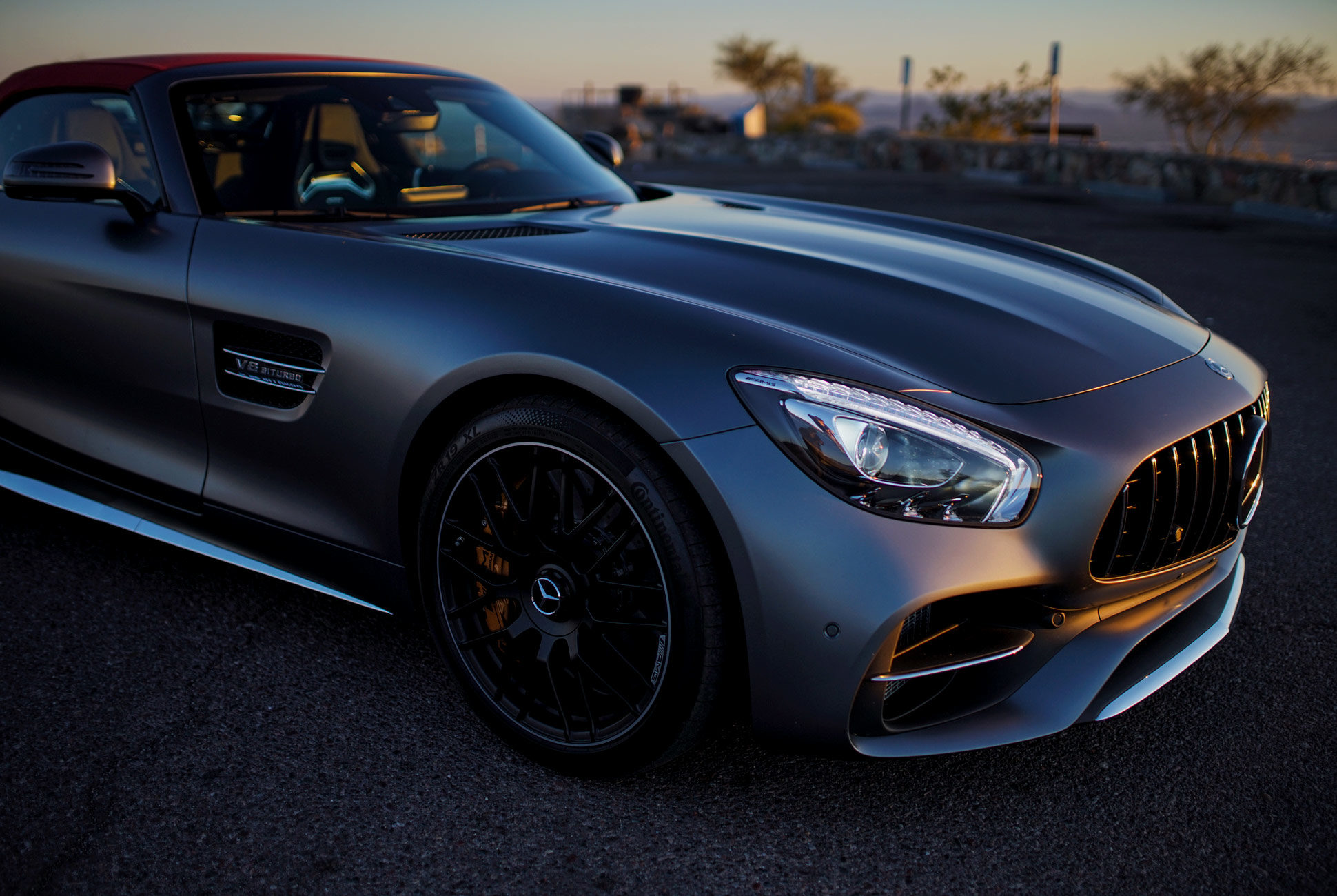 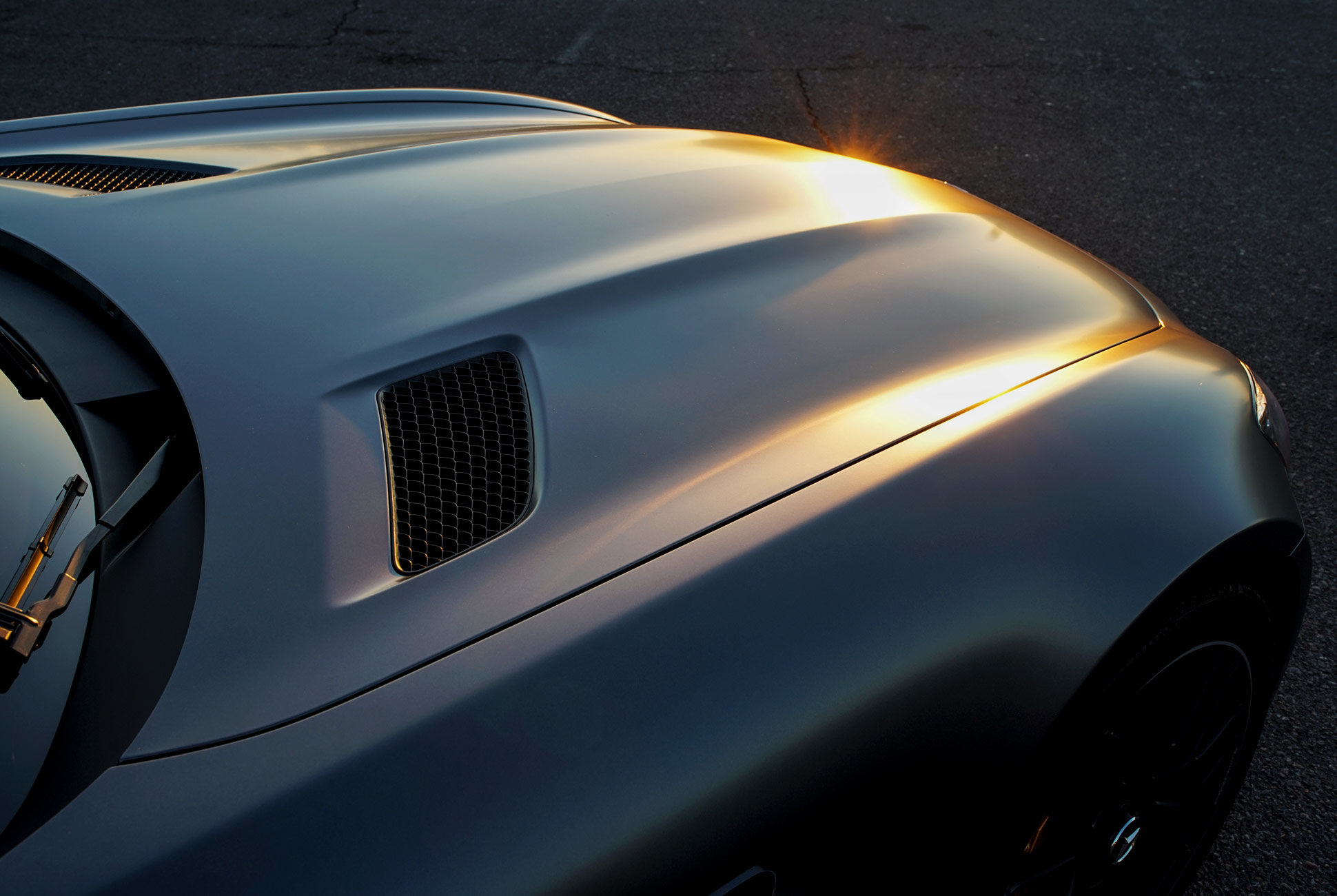 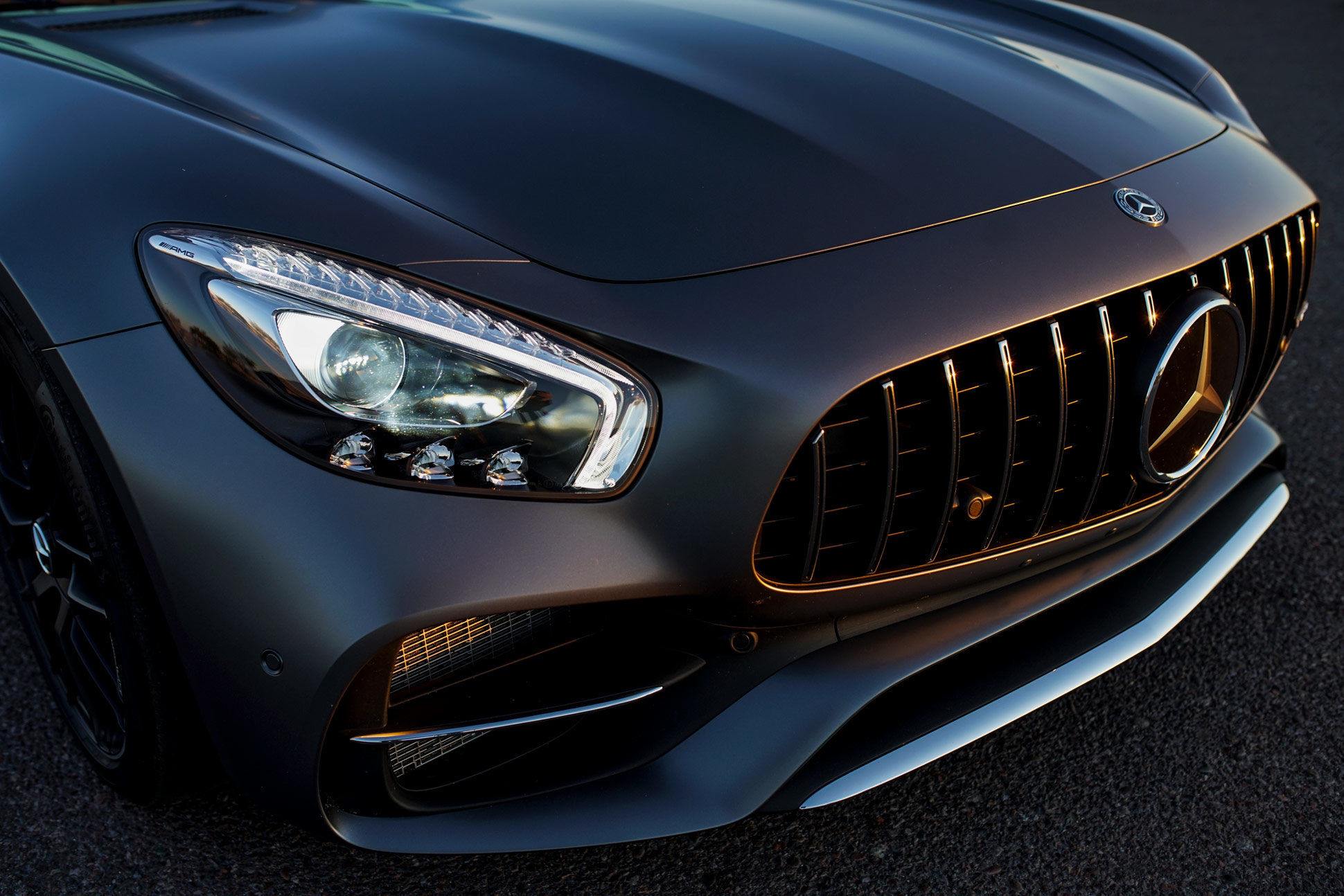 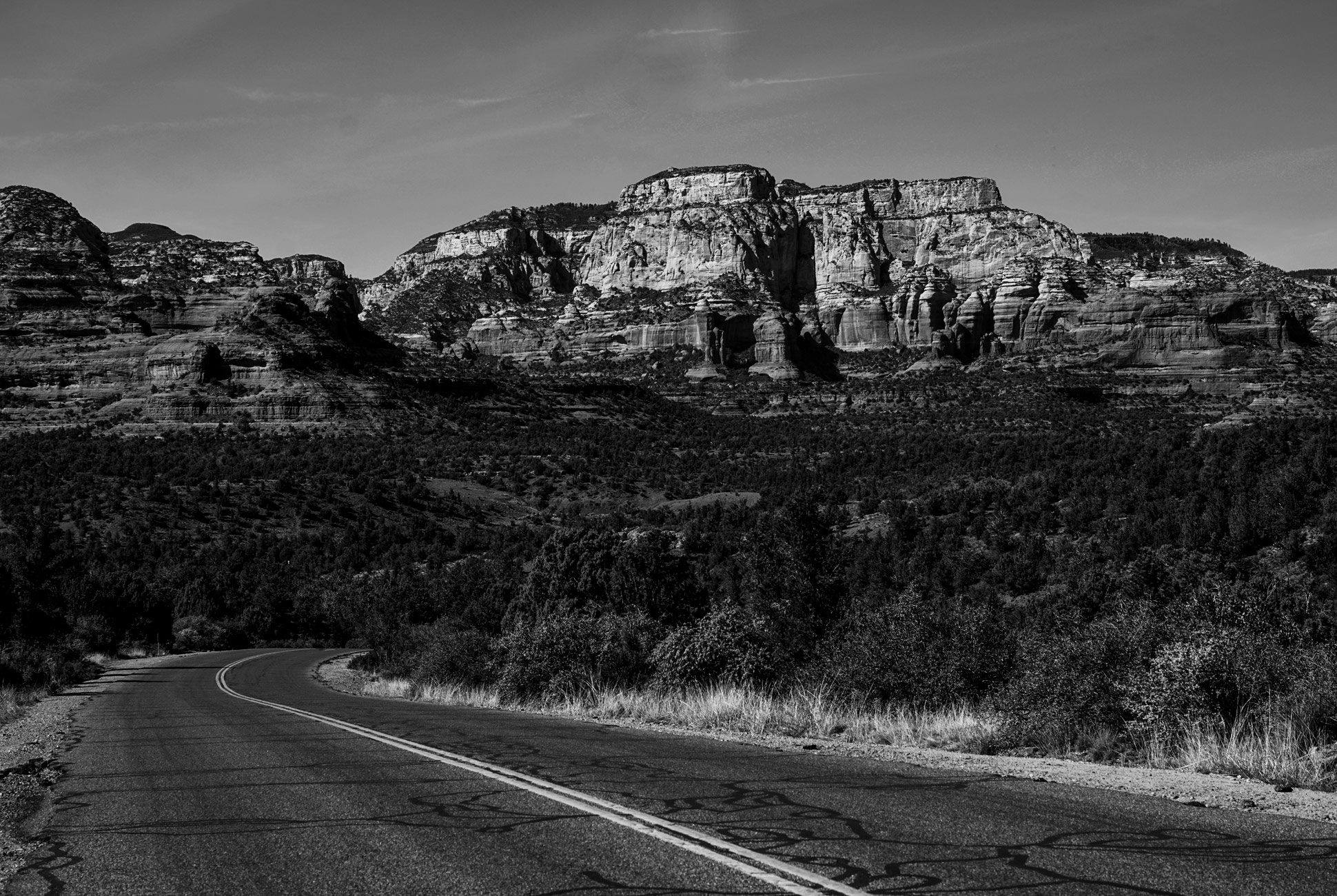 Much of the GT C’s technology has trickled down from the GT R, the race-spec version of the original GT coupe. In addition to performance mods, the new Roadster receives a reinforced body shell; a new hybrid, high-tech plastic “sheet molding compound” bonded with carbon fiber for higher strength and lighter weight; and aerodynamic and styling tweaks. Louvers in the front apron can open and close to improve cooling or reduce drag. There’s also an AMG Track Pace feature, which connects to an iPhone app to let you record and analyze your driving, complete with video.

I wouldn’t quite call this a touring car — it’s a proper sports car. After 300 miles, you start to feel it.

This juxtaposition of performance and luxury made for highly entertaining motoring through Arizona. Though Phoenix and its immediate vicinity are decidedly modern southwestern suburbia, once you head north, break off the freeway, and ascend into the desert-camo hills, surprises await. Prescott, Arizona, with its shops, bustling town square and pine-scented landscape, was new to me. So were the Granite Dells, an otherworldly landscape of large boulders. The town of Jerome — a weird little Brigadoon built entirely into the side of a mountain is a former copper-mining settlement, now a fabled ghost town, with both the alive and occupied coexisting with the dead and abandoned. Bottomed-out vintage pickups from the ’50s rusted in parking spaces in downtown Jerome; an ancient squad car with a single rotating red light on the roof sat abandoned in an alley. It didn’t give chase as we burbled through, roofs down, in our parade of mustard-yellow and matte-gray supercars.

And that’s the point of touring in a sports-car Roadster like this. Finding the world’s surprises, and having some fun between the highlights. Just not too much fun. 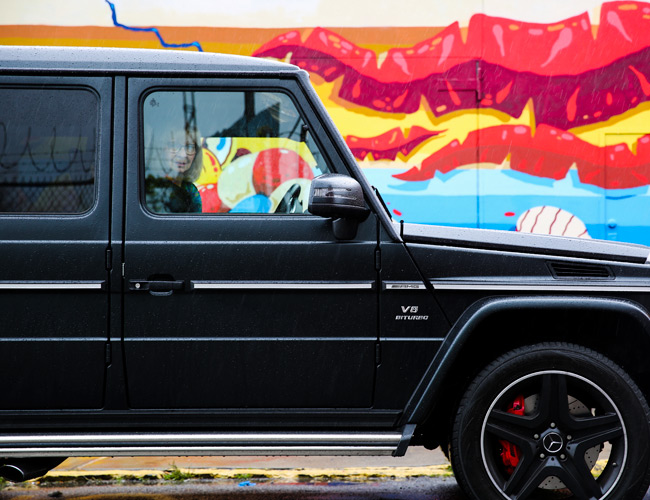 I had never driven a G63, and it’s Mother’s Day season: the perfect opportunity to enlist my mom to help me do my job. Read the Story