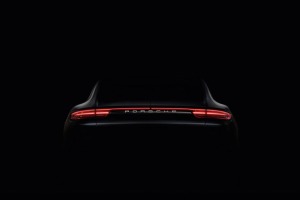 BERLIN — An all-new lighter and faster 2018 Porsche Panamera sedan will be unveiled in Berlin on June 28.

The redesigned Panamera will likely go on sale at U.S. Porsche dealerships during the first half of 2017. A teaser photo of the 2018 Panamera reveals a new look for the rear end.

“A success story began,” Porsche said in a statement on Tuesday. “And now will be continued. With the courage of a new generation. New standards will be set. Opposites reunited once again. More than ever. Look forward with us to a new four-door sports car.”

Edmunds earlier reported that the new Panamera is built around the Volkswagen’s Group’s so-called MSB large-car modular architecture that is shared across several of the Group’s luxury brands including Audi and Bentley.

The new Panamera is said to ride on a slightly longer wheelbase, improving cabin space, while shorter front and rear overhangs ensure that it is much the same size as today’s model.

Highlights for the 2018 Panamera are expected to include all-new V6 and V8 engines, weight-saving material, a new dashboard with touchscreen controls and a more luxurious interior.

Edmunds says: Car shoppers have just days before they get a deep dive into an improved Panamera that retains many of the car’s unique attributes.