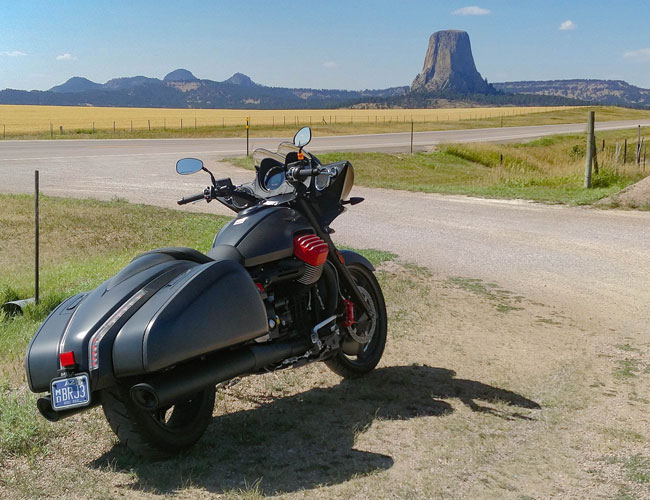 I told him it was called the Flying Fortress, Moto Guzzi’s new carbon-fiber cruiser.

Before I could further my pitch, he continued, “but we have speed limits for a reason around here.” My mea culpa fell on deaf ears. His hands were tied. I’d be coming home from Sturgis with a souvenir, just not the kind I’d wanted.

It’s hard not to push this bike. You get a sense of that when firing the beast up. It’s sinister, imposing and absolutely beautiful. Instead of the typical batwing-style front fairing, Guzzi’s bagger sports a cowl that could double as a Bioraptor from Pitch Black. There is carbon fiber everywhere. The fenders, gas tank, panniers and front wheel covering all sport the F1-derived weave (not that 3M-backed crap peeling from the hood of your buddy’s old WRX, but real, hand-shaped carbon fiber). Everything else, save the calipers and cylinder heads, is finished in matte black. Nothing is shiny. 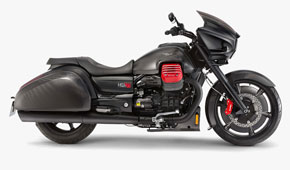 Credit Miguel Galuzzi. The famed designer, who penned Ducati’s Monster and my most recent infatuation, the Aprilia Tuono, worked tirelessly with engineers to make sure the MGX-21 wouldn’t stray from his original design concept. Inspired by the silhouette of a Bonneville Salt Flat racer, the MGX-21 is sculpted, flowing and clear on intent: this is the bike Darth Vader would ride if Endor had roads and Brioni stitched his cape.

Baggers usually don’t specialize in swooping corners, but this one does. Sure, the 21-inch front wheel can be a touch difficult to initially coax into a corner, but once on pivot the big Guzzi tracks true and with ease. Hit the apex, roll on some throttle, and the big Guzzi rights itself ready for the next one. It’s happiest in the meat of its powerband above 3,000 RPM, and all 752 pounds of this bike feel composed once at speed.

All of this makes Moto Guzzi’s decision to launch this bike during the 76th Annual Sturgis Motorcycle Rally an interesting one. Riding the Flying Fortress through the winding roads lining the Black Hills during the Rally is like sailing a Riva yacht amongst a sea of pirate ships. It’s a matte-black middle finger to the endless parade of chrome-dipped Screaming Eagles clogging South Dakota’s spotless arteries for 10 consecutive days.

Guzzi knows this won’t claim them many conquest sales. Harley Davidson owns the cruiser market in America. There are literally tens of thousands of Street Glide baggers (the MGX-21’s closest competitor) in Sturgis during the rally, and their riders aren’t the type to be swayed from tradition by futuristic materials or swooping space-aged shapes. Guzzi knows this, and at dinner their representatives told me they’re okay with that. They’re confident the attitude the MGX exudes will lure other riders who are looking for something “different” in a cruiser. Provided prospective clients don’t lose their license speeding through a test ride, they might be right. 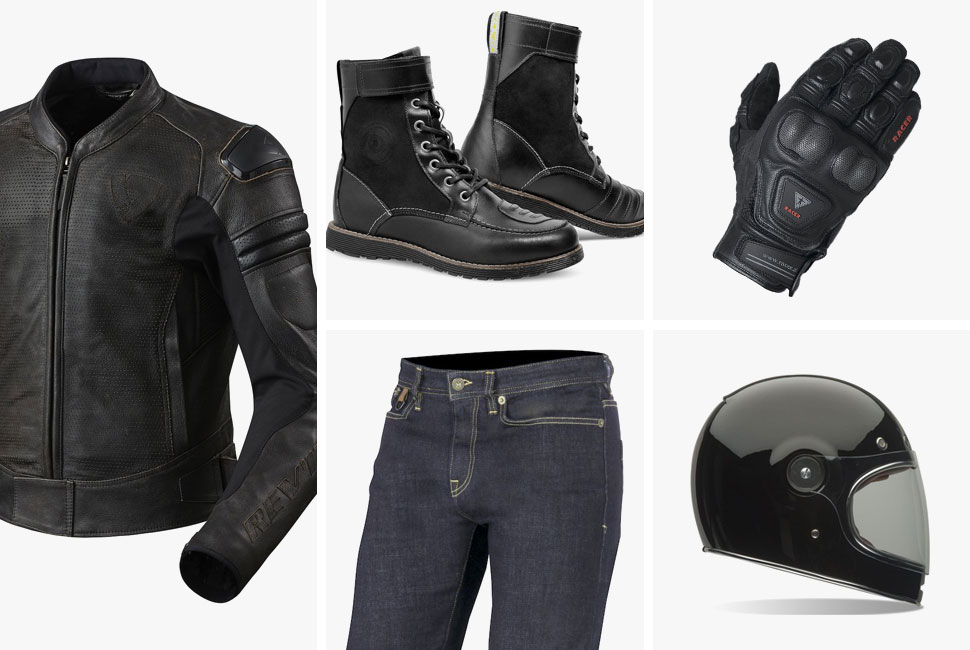