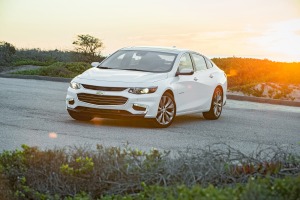 Both systems are optional.

The 2016 Malibu is on sale now at Chevrolet dealerships.

The 2016 Malibu received five stars in NHTSA’s front and side crash tests and four stars in the rollover crash test.

Key Malibu competitors include the Ford Fusion, Honda Accord and Toyota Camry.