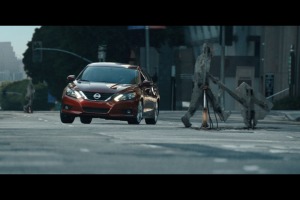 The 2016 Altima and Sentra are on sale now at Nissan dealerships.

NASHVILLE, Tennessee — In the new “Take On” marketing campaign, the 2016 Nissan Altima midsize sedan and 2016 Nissan Sentra compact sedan show how they are able to meet challenges on the road.

The Altima competes in a crowded segment that includes the Ford Fusion, Honda Accord, Hyundai Sonata and Toyota Camry. The Sentra takes on the Chevrolet Cruze, Honda Civic, Hyundai Elantra and Toyota Corolla.

In one commercial, entitled “Pop Ups,” the driver of a 2016 Altima deftly swerves around a variety of impediments that appear suddenly in the car’s path — including cardboard cutouts of pedestrians, bicyclists and construction workers — before braking automatically to avoid a simulated accident site.

The tagline, “Nissan Intelligent Safety Shield Technologies” — the name of the company’s safety technology suite — emphasizes the ability of Nissan vehicles to help drivers cope with the kind of situations that can arise in the course of daily driving.

Another spot, “Shark,” makes the same point when the driver of a 2016 Nissan Sentra is able to avoid a collision with a menacing shark-finned car by virtue of Blind Spot Warning, part of the available package.

The “Take On” campaign will continue to roll out throughout the summer, with additional feature-focused ads, digital content and social-media placement spotlighting the full lineup of 2016 Nissan models.

Edmunds says: With the “Take On” campaign, Nissan has found a unique way to capture the attention of consumers while showcasing its latest safety technology.