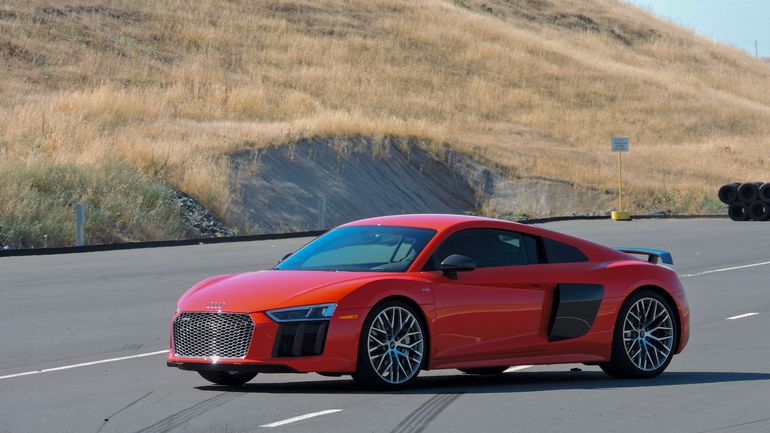 “Tell me that’s a car with a ski rack on the roof and not a cop,” I pleaded to my pal just after demonstrating the extreme acceleration of the 2016 Audi R8 Plus. That’s the one with 10 cylinders and a whole gob of horsepower. Unfortunately, the men in blue noticed my (highly illegal) demonstration and immediately pulled me over.

The R8 debuted 10 — yes, 10 — years ago, at the Paris Auto Show. It’s always been an undercover supercar lacking the élan of a Ferrari or the swagger of a McLaren. Still, its 5.2-liter engine, available detuned with 540 horsepower or a full-bore 610, is a twin to the Lamborghini Huracan, thankfully without any of the harsh angles prevalent on that angry bull.

Instead, this second-generation R8 carries the tight Audi design language seen on the new TT. Smooth curves tuck into a tightly conscripted front fascia. LED headlights and tail lights are standard, and the dynamic sequential rear turn signals grab the attention of the driver behind.

But you can’t talk Audi R8 without talking about the blade. The slash of solid black from top to bottom on the profile of the R8 is no more. Instead, the body color cuts through the blade, bisecting it into two distinct parcels. I love it, but some of my colleagues at Roadshow contend that the new style line interrupts the visual flow of the rear quarter panel.

I knew I had to get the R8 on the track to truly appreciate its mid-engine power. Thunderhill Raceway, a few hours north of Roadshow HQ, may not be the fastest track in the world, but there’s enough of a front straight to break triple digits and plenty of turns to toss the R8 around.

Upon startup, the V10 engine roared to life at a timbre that thrilled my soul. I wanted to turn it off and back on again just to hear its basso growl.

After a few warm-up laps on the two mile track, I was finally ready to let the R8 do its thing. I pushed the checkered flag button on the steering wheel to select Performance mode, which then let me drill down further to select Dry, Wet or Snow. The sky was blue and the temperature gauge read 105 degrees. Dry, it is.

Coming out of the horseshoe at turn 2 and into a downhill straight highlighted the Audi’s high-revving engine. The cylinders screamed behind me as I waited for the seven-speed dual-clutch transmission to upshift. The revs climbed higher and higher as I dared a quick peek at the tachometer. 6,500 rpm, then 7,000 rpms and still climbing. I started to get nervous. Will this thing ever shift? Will I blow the motor? Will Audi ever talk to me again?

All my concerns were for naught as the R8’s 5.2-liter engine is designed to rev that high. It doesn’t even hit peak horsepower until 8,250 rpm, and redline comes soon after at 8,700. Keeping on the gas is an exercise in pushing through your fear and trusting the vehicle.

Through the turns, the R8 hugged the track like I’d hug Chris Pratt should he walk into my office. That is, constantly and without interruption. In fact, with the all-wheel-drive technology I would have to work hard to get the R8 to break traction. Had I turned traction control off I might be singing a different tune, but while drifting around a corner is fun and all, it certainly isn’t the fastest way around the track. Instead the Audi stayed flat in the turns, exhibiting little body roll, letting gravity push me into the firmly bolstered (and heated!) racing seat.

Audi RS3 Sportback is the worst kind of tease

How to buy the best convertible

Check out Audi, BMW and Mercedes at Detroit in 360 degrees