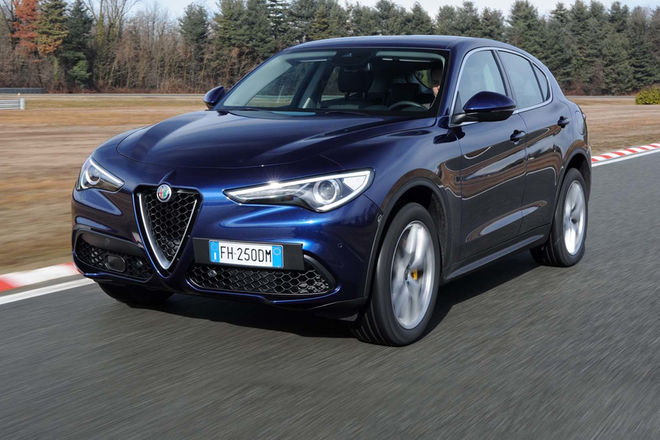 They named this car the Stelvio. The Stelvio Pass on the Italian/Swiss border is one of Europe’s highest and most visually memorable mountain roads. In winter it’s slippery; at any time, it’s a cascade of hairpin corners. It’s a good name for an AWD vehicle with sporty pretensions. Except if you ever drive the Stelvio, you’ll likely be stuck behind a crawling tourist bus. But let’s not allow dull reality to obscure Alfa Romeo’s extravagant sense of romance.

We won’t make a fuss that Alfa Romeo has just started with SUVs. Launching SUVs is just what you do if you’re a premium sports company that wants to stay in business. (Anyhow, trivia fans, it isn’t quite Alfa’s first utility vehicle. There was a Willys-Jeep-like scout car known as the Matta in the early 1950s.) 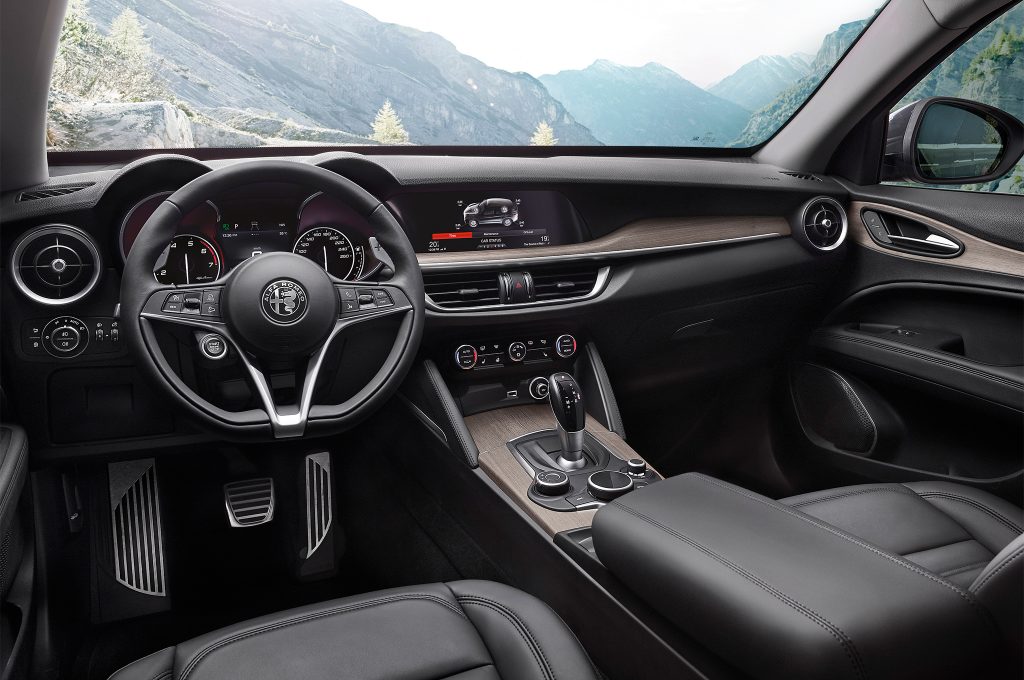 More interesting is that Alfa Romeo has just started making good cars of any kind. Before World War II Alfa was the pinnacle of both racing and luxury, the equivalent of today’s Ferrari and Rolls-Royce combined. But it was a long slide down, and since the 1990s its cars have been ridiculously patchy. You really don’t need to feel deprived that it has absented itself from the U.S. during those years.

Now we have the Giulia, and we know how good that is. Was it a freak, or can Alfa repeat the trick and build a range of strong players? Stelvio and Giulia sing off the same song sheet, using the architecture named Giorgio, unrelated to anything from Maserati or anywhere else in FCA. 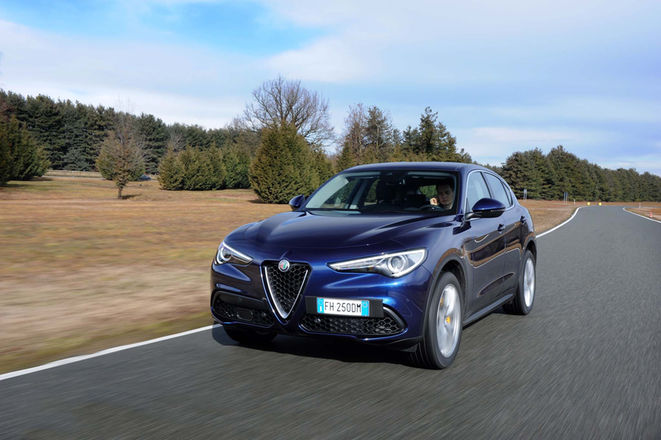 The body is rich in high-strength steels. Bar the roof, the whole skin and the suspension are aluminum. The prop shaft is carbon fiber no less. The suspension is a control-arm setup at the front, with multiple links abaft.

I’m at Alfa’s factory under Monte Cassino near Naples, Italy. It’s not actually a new site, but it has been rebuilt and is totally new inside. I’ve just had a tour, and it sure looks like a place capable of turning out high-quality cars. A Stelvio is outside, and I itch to jump in and drive. Except I bump into Alfa’s chief engineer, ex-Ferrari genius Roberto Fedeli, and ask about his aims for the Stelvio.

It’s supposed to feel like a car not an SUV. (Indeed there was supposed to be a Giulia wagon, but they cancelled it when they realized how carlike the Stelvio was turning out.) Critically, the height of the seating position relative to the roll axis is the same in the Stelvio as the Giulia. 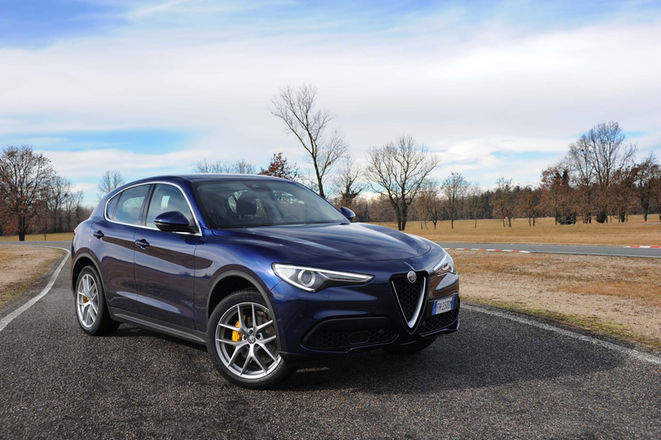 You sit 7.5 inches higher in the Stelvio versus the Giulia, this being the result of raising the floor 2.8 inches via chassis mods, taller tires, and setting the seat 4.7 inches higher off that floor. The front tread is also about 2 inches wider, thanks to longer suspension arms.

Although Alfa got its initial splash by unboxing the Instagram-magnet 510-hp Quadrofoglio edition at the L.A. show, the first Stelvio to go on sale is the 280-hp four-cylinder. It’s a 2.0-liter job with Multiair fully variable valve timing and lift. Downstream of the flywheel, we find ZF’s industry-straddling eight-speed.

Along the road, it’s a fine engine. The Stelvio is light for its class, and 280 bhp is strong for a four-pot. The little pistons—it’s only a two-liter—reciprocate as smoothly as you like, heading to the 6,000-rpm limiter with keen abandon and an engagingly fizzy timbre. Clearly you need lots of boost to get that power out of such a small engine, but it’s well calibrated and arrives with tidy manners. 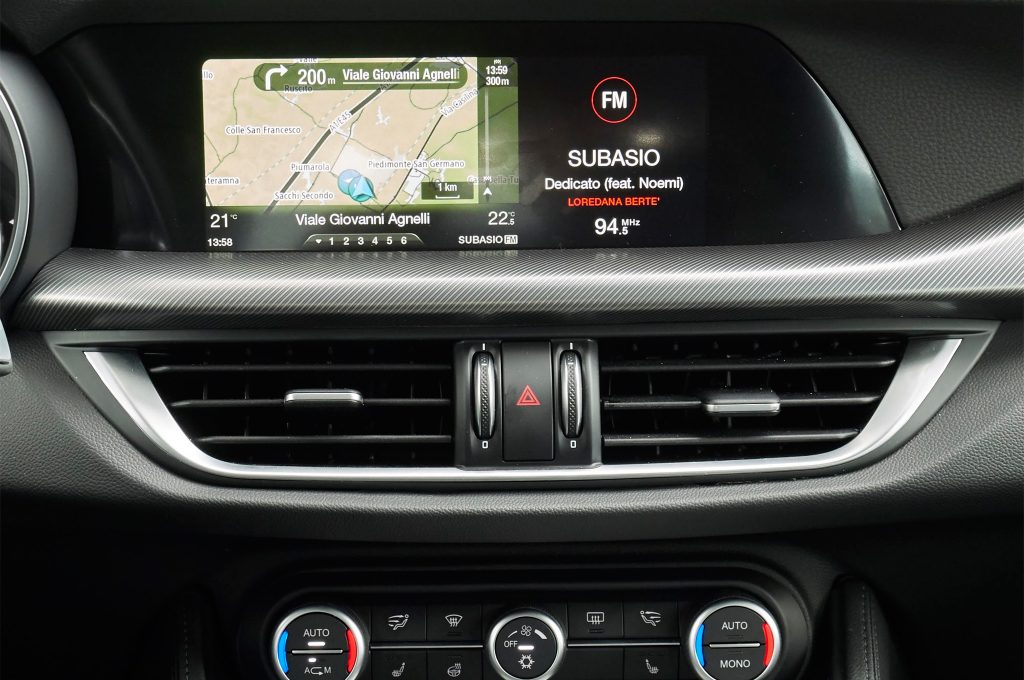 Slowing down is equally strong but less well mannered. Alfa claims a breakthrough braking system that more closely integrates the electronics and hydraulics. It’s supposed to shorten stopping distances. We’ll see when we test it. But it also makes it infuriatingly difficult to be smooth in the sub-5-mph region, turning stop-start traffic into a jittery mess.

The steering is high geared, which is great for the twisty mountain road up to Monte Cassino’s spectacular monastery. High-geared but not twitchy, it cruises the autostrada in calm stability. But whatever you ask the steering to do, you first have to squeeze through a thin rubbery wrapping. It significantly erodes Alfa’s talk of sportiness.

The Stelvio sure grips in the bends and resists body sway and understeer gamely. But there’s not quite the subtle interaction between throttle, steering, and trajectory that characterizes a Porsche Macan. The center differential sends nearly all torque to the rear on straights then divides it more equally when slip is detected. It feels like that process begins early. 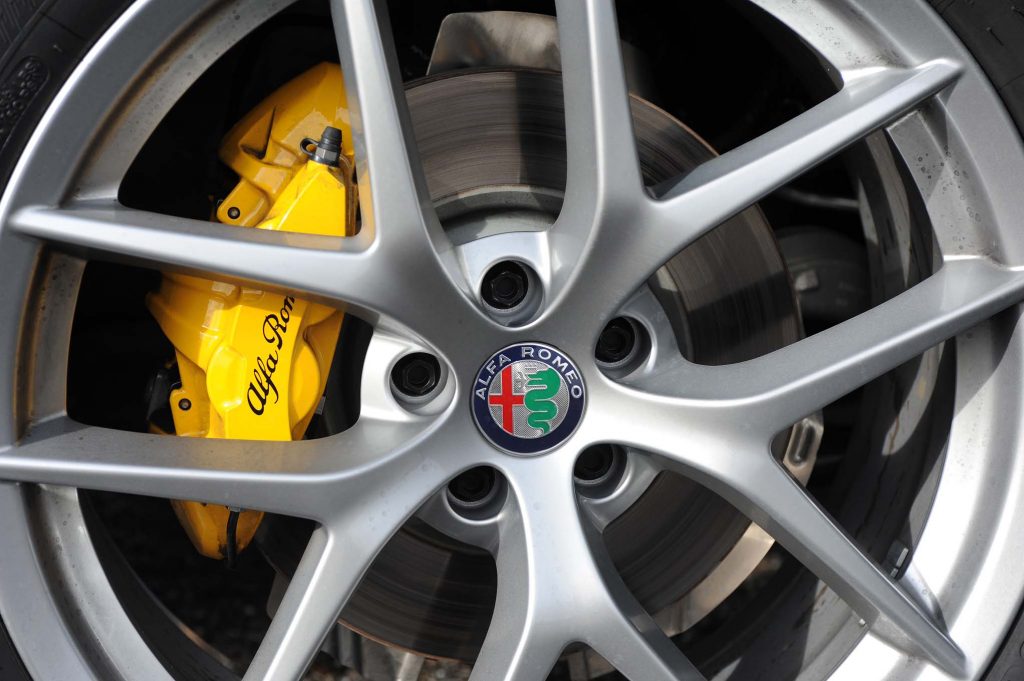 Ride is not like the luxury Mercedes-Benz related. This swallow is much larger than most but can send an upwardly impact on the surface of abrupt changes, followed by a turbulent throbbing.

So that we can come back. If dealing with not far away from Porsche and riding a tragedy far away a Mercedes car, maybe Alpha is an accurate judgment compromise. But it is not fascinating and sporty chassis Alpha is worth saying that the engine is not.

Alpha is very straight here. Proving that it can get the most basic right, so it is more concerned that the settings can be adjusted after release. And the most basic classification. Suspension is very balanced, surprise even in the case of serious coercion is free, and the body shell always feels very stiff.

Inside, let the bottom of the thing is correct. Quality first: postoperative complications. Almost everything is well crafted and solid. The maximum deviation of the car from the normal breathing is an optional device menu. Semi-autonomous emergency braking is the standard, blind spot warning and follow-to-stop cruise is the choice, at least in Europe (no final US specification). But you can not have any system that covers the autonomous input to manipulate its lane departure from the warning, without the lane to keep the assist.

No massage chairs, reconfigurable main instruments Recently, complex connection systems, or electric awnings. Even Apple CarPlay and Android cars stay in the to-do list. Feeling like a simpler era. A lucky no interference, must say.

This is a pretty little hut. Inside the styling, the richer, finer elegance then most of the rivals. Also very spacious, decent backspace and larger trunks may be recommended than compact size.

The first attempt to start SUV from Italy? You may have been looking forward to ambitious ambitious, must be thin. On the contrary, you get a solid foundation. There may be an unnecessary romantic Stelvio name, but the vehicle is grounded.