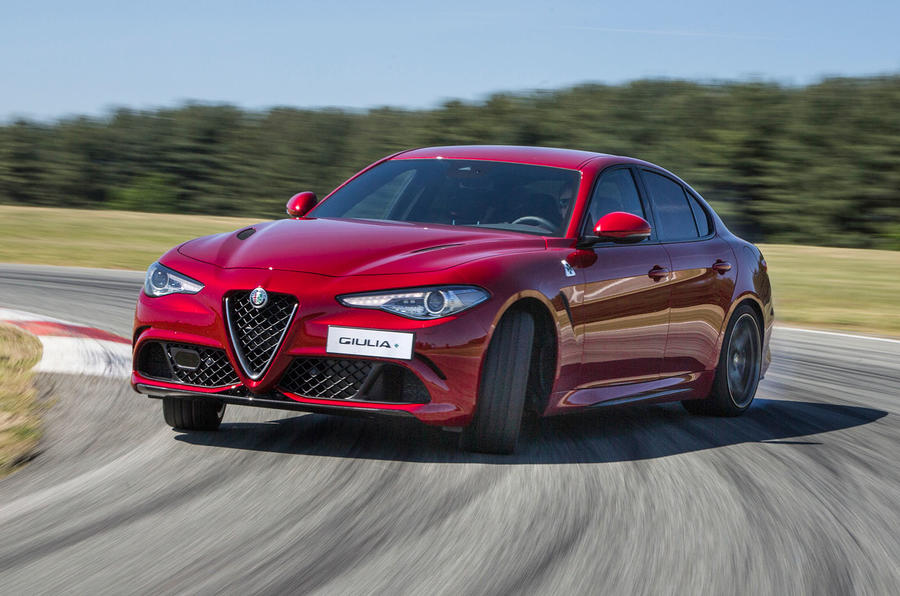 The Alfa Romeo Giulia Quadrifoglio, or Giulia Cloverleaf to us linguistic imperialists who still prefer Venice and Florence to Venezia and Firenze, is an all-new sports saloon from the people who brought you the original Giulia, Alfasud and 75 – handling greats, all.

There has been regrettably little from Alfa with which keen drivers might indulge themselves since, of course. Which makes this a bit of a watershed car for the Italian firm, one to give us reason to feel excited by the Alfa brand again and to begin a long reputational rebuilding process.

Chief testerIn terms of all-round completeness, the Giulia is certainly one of Alfa’s best efforts in recent memory

This company can rightly claim to have made some of the best-handling sports cars and saloons in the world in its pomp, and it has ambitions to do so again.

The Cloverleaf is the headline version of the all-important Giulia saloon and standard-bearer for Alfa’s new philosophy in taking on the likes of Audi, BMW and Mercedes.

The car is its first new big-volume model in more than 20 years to be driven by its rear wheels and it also has a powerful and innovative engine and a class-leading power-to-weight ratio – all of which, Alfa hopes, will add up to a convincing selling point. We’re assured to expect the same from any Giulia compared to its German peers, petrol or diesel-powered.

Made predominantly of high-strength steel, the Giulia’s platform is modular and will also be used on larger models coming down the pipeline in future. Aluminium wings and doors and a carbonfibre bonnet and roof keep the Cloverleaf’s kerb weight down. Double wishbone suspension is used up front while a multi-link system serves at the rear, in both cases with aluminium subframes and chassis arms. ZF Sachs continuously variable dampers feature as standard.

With an aluminium head and block, a 90deg bank angle, oversquare cylinders, a cross-plane crankshaft, direct fuel injection and cylinder shutdown technology, it produces maximum outputs of 503bhp and 443lb ft and spins to 7000rpm.

Power finds its way to the road via a carbonfibre propshaft, an eight-speed torque-converter automatic gearbox and an active torque-vectoring rear drive module with electronically controlled clutches on either side of the differential.

Although other markets will be offered manual and four-wheel-drive versions of the Cloverleaf, the UK will not. Meanwhile, optional carbon-ceramic brake discs and lightweight seats add the potential to pare down the car’s mass even more.

While clearly influenced by the big-hitting German saloons with which its maker is seeking to compete, the Giulia’s styling is relatively curvy and seductive – just as we’d all prefer it should be. The Cloverleaf’s additions to the recipe are impactful but not indelicate, the rear diffuser and quad pipes narrowly stopping short of undue visual aggression.

The car isn’t as compact or effete-looking as a 156, but it remains both smaller and lighter than most of its rivals, with entry-level diesel versions weighing less than 1400kg without fluids – and that’s certainly light by class standards. The grey 19in alloy wheels of the Cloverleaf, meanwhile, are a nod to the ‘teledial’ rims of those fondly regarded GTA-badged go-faster models of the last decade – and one that Alfa brand devotees will surely cherish.

The Giulia’s interior is well packaged. The driving position is low-slung, straight, adjustable and well supported in two-tone leather/Alcantara sports seats with extendable cushions and thick side bolsters. There’s plenty of room up front, and in the rear there’s particularly impressive leg room and adequate head room for all but the tallest passengers.

The impression made by the car’s fascia, switchgear and infotainment system is more mixed. Attractive contrast-stitched leather covers the steering wheel, rolltop dashboard and upper door cards, and it’s all suitably rich on the senses, but the column stalks and other switchgear don’t do the car any favours, looking and feeling more cheap than those in AMG Mercs and RS Audis.

Appearing as if from nowhere through a smoked trapezoidal screen, the infotainment display has the perfect opportunity to impress, and yet it’s not sufficiently big-screened or graphically sophisticated to follow through.

The three-spoke steering wheel carries the car’s red starter button, a long press of which elicits a pulsating idle from the engine that turns into a tuneful but not desperately soulful rasp with revs.

The noise might have been good enough from any other car maker, but Alfa has made some of the most sonorous V6 engines ever to tickle our eardrums, and when engineering a new one you’d hope it would be good enough to make it sound the part. The Giulia Cloverleaf sounds good; it’s agreeable, pleasant and nice but resolutely modern rather than melodious or melancholic. Better than an M3, certainly not better than a C63 – or a six-cylinder Jaguar XE S, come to think of it.

There are four settings for the car’s rotary ‘DNA Pro’ drive mode selector: Dynamic, Natural, Advanced Efficiency and Race. The last of those deactivates the car’s electronic aids completely, as well as preparing the engine, transmission, steering, brakes and rear differential for track work. The adaptive dampers are controlled separately, via a toggle button on top of the rotary knob.

You’ll be well prepared for how uncompromising the Cloverleaf’s rapier-like steering response is before you even approach a corner, there being little more than two full turns of the wheel between locks.

Knowing that Alfa has form for overly direct steering with its modern performance machinery, and also that certain Ferrari chassis engineers have been involved in the Giulia’s development, you might also have predicted that the car’s keenness to change direction would take some getting used to. It’s a very pleasant surprise to discover, therefore, that the Giulia Cloverleaf doesn’t actually feel all that directionally sensitive or highly strung – at least not after you spend an hour or so in it.

The thoroughness of Alfa’s engineering job on the front wheel kinematics means that the Giulia can run with a steering ratio that other saloons would struggle with, and it does so without vagueness or nervousness, or bringing on understeer. The double-wishbone front suspension allows good camber control, as well as quite steeply inclined steering axes and very little wheel scrub, leaving the front wheels free to move and giving the power steering less initial friction to overcome. So while the steering begins to feel a bit light off-centre, it’s got good centre-feel, and while it’ll wake you up at first with its incisiveness, it’s a directness you soon learn to process and adapt to.

Body control is very well judged. Alfa Romeo only gave us the chance to drive the car on smooth asphalt at its Balocco test track, so a verdict on ride quality will have to wait. But over the track’s painted kerbs the suspension felt decently quiet and absorptive, and body roll was tightly and effortlessly reined in.

To the acid test, then. No Giulia worthy of the name could be complete without delicately sweet handling balance to make good on the promise of that rear-driven chassis, and to add the extra layer of driver involvement that modern super-saloon buyers crave. If this one had failed to come up with that kind of dynamic poise, it would have thrown into question the credibility of its maker’s grand model overhaul and undermined our faith in Turin’s grasp of what made its greatest driver’s cars so great in the first place.

But the new Cloverleaf doesn’t fail. In fact it succeeds with such a beguiling kind of handling adjustability that you might have imagined the past two decades of dynamic mediocrity and regression simply hadn’t happened. The fast-acting rear diff, so clever at keeping the car stable in other modes, pitches the Cloverleaf into neutrality and beyond in perfect proportion to the angle of your right foot on turn-in. Countersteer has to be applied judiciously through that fast steering rack in order to bring the car back into line again smoothly, but the rate at which the car picks up drift angle is gentle enough to be worthy of the warmest of praise. A BMW M3 isn’t as forgiving.

But an M3 wont be easily brushed aside by the hottest Giulia when the time comes for the inevitable comparison test, because the Alfa’s eight-speed auto ’box isn’t quite on the BMW’s level for shift speed, instead slurring its upshifts at times. While it picks up from middling revs with building urgency and responds crisply to the accelerator, the car’s V6 doesn’t always feel like a true 500bhp operator either. In fact, while it’s a wildly unrealistic expectation to have, if the Alfa’s powertrain were as good as its limit handling, it’d be a match for Mercedes-AMG’s 4.0-litre V8; and it quite plainly isn’t that good.

Alfa fans have been waiting an awfully long time for a sports saloon with the qualities to reward their good faith. Where it really matters, on handling appeal, the Giulia Cloverleaf has those qualities in abundance. It remains to be seen if they’ll shine as brightly on the road as they do on a millpond-like, sun-drenched Italian circuit, but for now there’s every reason to imagine they will.

Whether Alfa Romeo will give the car the kind of price tag it’ll need to convince people to tolerate its minor shortcomings on material quality and multimedia sophistication, and tempt them out of their Bavarian ’bahnstormers, also remains to be seen.

Our guess is there’ll be more than enough warmth of sentiment in the UK for the Alfa brand, and rose-tinted recollection of its glory days, to give the car the healthy sales kickstart that will be nothing less than this car deserves.