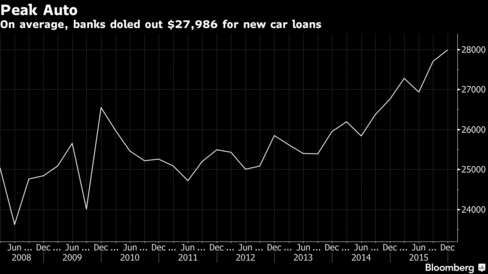 “Someone will get hurt in auto lending,” but not JPMorgan, Dimon, 60, said Thursday during an investor presentation in New York.

JPMorgan Chase & Co. Chief Executive Officer Jamie Dimon said the market for U.S. automobile lending is “a little stressed” and that he foresees higher losses ahead for some competitors.

Americans surged into dealers’ showrooms as cheap gasoline and a growing job base helped boost auto sales to a record year for sales in 2015. Lenders followed: The average amount financed for new-car loans at finance companies rose to $27,986.15 in the fourth quarter of 2015, the highest level since the Federal Reserve began tracking that data in March 2008.

Now, banks are worried the party could be over. U.S. auto sales fell in May for the second monthly decline this year and reinforced the idea that demand for cars and trucks has plateaued. The results for last month, whose Memorial Day weekend promotions make it a bellwether for gauging buyer appetite, show consumer demand for cars leveling off faster than executives predicted.

Ally Financial Inc., the former lending arm of General Motors, said auto loans will remain a ‘‘bread and butter’’ product for the firm, adding that the company could remain profitable even if its auto retail losses double.

“We think some of the credit fears in auto are, candidly, a bit overdone,” Ally CEO Jeff Brown, said at the conference. “While we have a pretty high concentration in the auto industry both in sales and the credit exposure, we understand the industry better than anyone else, we’ve been in it for almost 100 years.”

Capital One Financial Corp. CEO Richard Fairbank said that he likes his company’s auto-lending business and he’ll keep an eye on risks including falling used-car prices.

“We have been raising flags about the underwriting practices that we have seen in the industry,” Fairbank, 65, said at the meeting.

Analysts predict a surge in previously leased vehicles for sale will pressure used- and new-car prices, which could lead to consumers owing more on a loan than the auto’s value. The Manheim U.S. Used Vehicle Value Index fell in three out of the first four months of the year, dropping 2.4 percent to 122.8.

“We like the business, but it’s not for the faint of heart,” said Davis, 58, who runs the nation’s biggest regional bank. “It’s a business you have to watch through the cycles, and right now it is probably at its least attractive. But in what could be a day, a month or a year, it could be very attractive.”