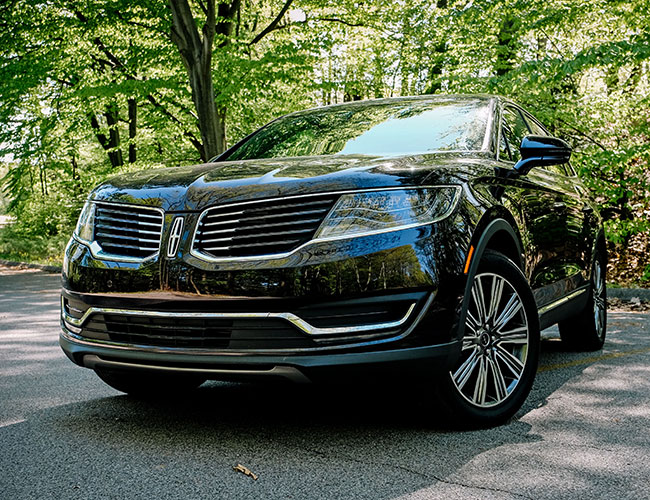 Impressing Millennials actually in… a Lincoln?

Now back to DTW, where I was having a difficult time saying goodbye to my opulent luxury ship. Partially because I loved it; mostly because the MKX had surprised and amazed everyone I’d seen over the course of my travels. I dropped off my “Chrome Couture Dark Brown” 2017 Lincoln MKX at the Detroit airport after 1,200 miles behind the wheel. This was quite the trip: attending the wedding of a dear friend and schoolmate, visiting other friends and touring my college campus, then heading home to Western Michigan to visit family and yet more friends for three days.

Of course they’ve all seen the commercials: Matthew McConaughey being a very Matthew-McConaughey version of himself in various Lincolns, or falling into swimming pools, working hard at portraying the cars as sexy status symbols. “Have you been doing McConaughey?” my friends asked [many] times. I’d oblige with my best “alright, alright, alright,” (which is, gotta say, pretty damn good). But then I’d open the door and explain, though the commercials are bizarre, this car is many magnitudes better than you’d ever imagine.

Upgrading to the Black Label series — the very primo top-of-the-line offerings of Lincoln’s MKC, MKZ and MKX models — is key. When I, jaded auto journalist, first opened the doors myself, my head did that subtle backward-jerk reflex due to pleasant shock; my eyes widened. The svelte, larger-than-it-looks exterior gave way to a sumptuous, luxurious cabin. Tobacco-brown leather seats with their beautiful factory patina, yard after yard of dark leather everywhere else, the alcantara headliner, the satin metallic trim — all so gorgeous I wanted to (and did) touch it all. It was surprising.

My friends were surprised too, because people my age (a spry, barely graying 31, thanks) usually think of Lincoln as the stuff of car services, old people and thick, velour sofa seating. We don’t think of Lincoln as a modern, relatable luxury brand on a par with the German guys. Until we witness the Lincoln in person, that is. The pretty girls at the wedding looked curious when I idled by before the ceremony (without even witnessing my glowing personality); the quartet of college friends pressed me for questions at the hotel. My college roommate James did a complete walkaround of the car before even acknowledging me. High school friends back home literally couldn’t believe the technology (let your Lincoln parallel park itself and jaws drop).

The technology, the luxury, the power, the looks. It was like I’d driven up and offered rides in the latest auto out of Stuttgart — only more impressive because this was unexpected. Especially this example, fully loaded for $67k — a price that buys you a worse-equipped, midrange foreign sedan. The questions kept screaming through my head: Why do we not know about this? Where has Lincoln been? The indirect answer, I think, is that those David Wooderson commercials and the ubiquity of limo-service Town Cars, which have blinded my generation to a truly great, relevant product from one of the oldest purveyors of luxury automobiles in the world.

Lincoln pulls all this off so deftly. The aforementioned technology that discerning, modern customers relish — 360-degree cameras, radar, collision avoidance systems, etc. — means this large cruiser will almost completely drive itself. Its power moves the thing like mad and operates as smoothly as decadent mousse. The interior is what impressed most of all: no one could stop poring over every surface.

Why do we not know about this? Where has Lincoln been? The indirect answer, I think, is that those David Wooderson commercials and the ubiquity of limo-service Town Cars.

Style is where “Black Label” comes in, and also where Lincoln is stepping up their game. There’s a lovely 19-speaker Revel sound system, heated/cooled/massaging front seats, a huge panoramic glass roof on hand — but it’s the overall look and feel of the car that matters most. Black Label aesthetic packages are, well, labeled by theme: my MKX, with its rich browns and plush everything, was called “Indulgence.”

Which is a little corny. But so is McConaughey. Which is my point. But who cares? (Which is my other point.) This is definitive American luxury: beautiful, uncomplicated, relatively affordable and impressive at every turn. My friends were drawn to the MKX, despite its perceived antiquity and corniness. So was literally everyone else: parents, the neighbors, 9 year-old nephews, 93 year-old grandpas — and did I mention the girls?

Ownership gets more impressive. A representative (“liaison”) will meet you wherever you’d like, to assist with your purchase. Owners get complimentary car washes and annual detailings, even reservations at high-end restaurants. Lincoln is in good with the Tribeca Film Festival and hip grooming lounge Fellow Barber. It’s a luxury lifestyle that we Millennials, the self-indulgent generation, crave.

My opinion, peers of mine? You want luxury, convenience and the capacity to impress? You could go German. But instead start stateside, where a 99-year-old company has the answer. Alright? Alright. (Alright.)