“The e-Power system allows you to enjoy all the benefits of an EV without having to worry about charging the battery,” the company says.

The Japanese marketing campaign for the car, in fact, stresses the driving experience in its slogan: “You’ll love it with your foot on the pedal.”

READ THIS: Nissan To Launch Plug-In Hybrids Too, In Less Than Two Years (Jun 2014)

In a video ad (which you can watch at the bottom of page 2), 91 percent of drivers who tested the Note e-Power said they noted a difference in acceleration, 96 percent said they “loved it when they pushed the pedal,” and 84 percent said they “felt the future.”

The new hybrid system is, Nissan says, “a gateway to 100-percent electric cars,” designed to further the company’s goals for zero-emission vehicles.

And its engineers drew heavily on the company’s experiences with the Nissan Leaf, the world’s best-selling electric car, with global sales that have now crossed 250,000 units.

The Note e-Power uses a small lithium-ion battery pack, and an unspecified engine, tuned to run most efficiently at 2500 rpm, to power the generator that charges the battery.

As in any hybrid or electric car, regenerative braking captures otherwise wasted energy to recharge the battery as well.

Nissan says the fuel economy ratings of the Note e-Power are expected to be similar to those of “leading conventional hybrids.” That’s likely a reference to the Toyota Prius, rated at 52 to 56 mpg combined in the U.S. 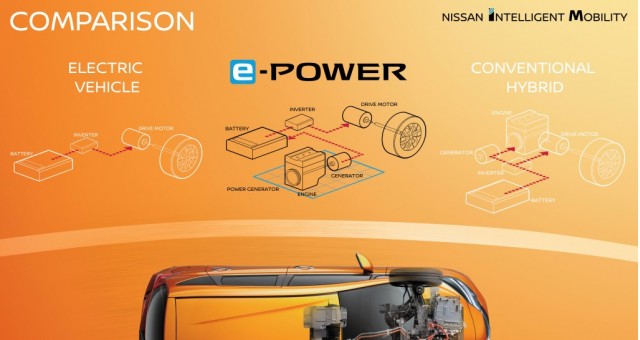 But the company was stingy with technical details in its press materials, which did not specify the battery capacity, engine output, or motor power.

References to the use of a Leaf motor, however, would indicate an output of approximately 80 kilowatts (110 horsepower).

The closest hint on battery size was a comment from chief powertrain engineer Naoki Nakada, who said it had been challenging to split apart the components of the powertrain and to minimize battery size.

“Compared to the Leaf,” he said, “the batteries are one-twentieth the size—and made to fit under the front seats without having to sacrifice interior space.”