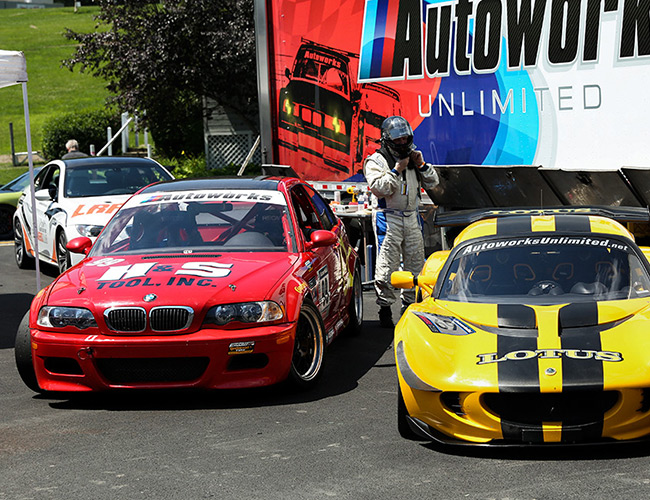 Driving fast, he says, is the kind of activity that keeps his mind sharp, even as his body gradually slows him down. The Drivers Club — which starts at a $16,500 initiation fee, costs $3,630+ a year, and allows drivers to get up to 60 days of track time annually — is an investment in staying sharp. For Veteran, the benefits outweigh the costs.

Both Frank Veteran’s hips have been replaced and he needs back surgery. His running around is a bit more limited these days — he used to ride motorcycles, but his body does better now with four wheels connecting him to the tarmac. About a decade ago, he bought a BMW M3 and did the Driver’s Program, then did M School, then did Skip Barber. Then he bought a former IMSA Grand Sport BMW M3 race car and joined the Lime Rock Drivers Club.

Veteran’s in a blue-and-white Sparco racing suit that fits loose over his heavyset frame. In the car, he’s fully connected — helmet, brace, forced air tube, shoes, gloves. Out of the car, over lunch, he still wears the suit and the shoes. There’s not much down time on Lime Rock Drivers Club track days; an hour on track alternates with an hour off, and the drivers — about 15 here today (there are 75 total in the club) — are milling about in the members-only Clubhouse like professional racers waiting for qualifying to begin. The vibe is congenial and casual. Chatter revolves around how lap times are trending, who’s going north or south in their driving, what corners are giving people trouble.

Veteran and I talk about such things, briefly. His lap tracker isn’t working today, and he has no good sense of what’s going down out there on the hot laps. So, instead, we explore the depths of why one drives these kinds of cars on these kinds of tracks. We explore why someone like Veteran — a local in the area and retired plastic surgeon — joins a country club-like track experience like the Lime Rock Drivers Club, at a not-insubstantial fee.

Mostly, it’s mental, he says. Driving, for most of us laypeople, centers around getting from one point to the next safely and comfortably. On the track, the only thought is how quickly one can make a lap. And to do that, it takes every millisecond of acute attention paid to pressing the pedals, shifting the gears and steering the wheel. It’s all-consuming. Those minutes of hyper concentration are addicting — it’s the same draw one feels from the rest of the extreme sports — whether it be racing airplanes, heli-skiing or mountain biking. The thrill of checking out of the chatter in the mind and getting into the zone. Veteran loves that. It keeps him sharp.

The thrill of checking out of the chatter in the mind and getting into the zone. Veteran loves that. It keeps him sharp.

To demonstrate how driving keeps the mind on a razor’s edge, I hop in Steve Abrams’s blue Porsche 911, which he casually refers to as “The 120 mph Cupcake” (Abrams owns Magnolia Bakery and the bakery’s branding is plastered on the doors, hood and roof of the car). Most of the cars on the track today are Porsches, and most have been carefully modified to align better to racing specs rather than road specs. Abrams says he bought the 911 as a mid-life crisis — he wanted the eye-catching sports car to cruise around with — and then slowly stripped it down to its bare elements and made it ready for the track. It now has a full roll cage, two four-point harness bucket seats, a racing steering wheel and digital instrument cluster, a handful of switches in the dash, and not much else. This Porsche’s no longer about frills. It’s about speed.

Drivers Club at a Glance

Abrams takes the first lap around Lime Rock “slowly”, then asks if I’m ready for things full speed. I give the affirmative, and we catapult down the front straight until he hits the brakes violently, lunging us both hard into the straps of our harness. We careen around the right hander as Abrams wrangles the wheel, pulling in tight for the apex while accelerating hard into the next left. Veteran and I had talked about how you’re never off the pedals — you’re either touching (or flooring) the gas or touching (or flooring) the brakes at every moment on the track. Abrams demonstrates this by launching me around the cockpit as I try to snap photos. He’s agile and quick, and his wiry build (similar to a marathoner’s) wrangles the Porsche around the track with vigor.

Abrams complains that with my added weight (around 215 pounds), he’s limited in showing me how his car truly performs (no lap PRs with the chunky journalist in the car). I get his point, but his demonstration is still compelling. These guys wring the shit out of their race cars, and driving that fast leads to attention overload and endorphin jailbreak. And I’m only in the passenger seat.

Most of my time on track has been during press drives for a cadre of impressive cars: Porsche 911 GTS, Audi S4, BMW X6, Jaguar F-Type, Range Rover SRV. But those are stock cars and these are race cars. Veteran and I chat about it after I return to the pits a bit sweaty and fully invigorated. He says he doesn’t get why people drive racing-inspired stock cars out here. A race-spec’d car will almost always beat out a stock car on the track. And for a much more reasonable price, you can get a race-spec track car that’ll outperform anything stock — it’s just a matter of weight and performance. A stripped-down Miata, with just roll cage, racing seats, composite windshield and rear window will trounce most of what Porsche, Mercedes-Benz and BMW is putting out as street legal. All the leather and speaker systems and power seats just slow you down.

He craves those spikes in mental acuity that only come from something that is life-and-death.

Veteran tells me about a guy who bought a new Porsche 911 GT3, the closest thing to a race car that Porsche offers. He brought it out to the track and raced it around, came in bragging about 1:15 lap times. Race-spec Miatas, he says, are doing 1:03, 1:05 track times.

Quality of humor aside, point conceded. It shows how these guys think: this is not a club for flaunting expensive toys (though there is some of that); this is a place for guys who love racing to get out on the track. This is a place for normal guys with a bit extra disposable income to come and get their kicks trying to be racers.

The span, Veteran says, of guys who come here ranges from the slightly-above-middle-high-class people to the guys who have more money than they’ll ever spend. He says he’s somewhere in the middle of that range, but racing still hits his pocketbook. In addition to the dues, a weekend (Friday and Saturday) at the track, for four hours of track time a day, all told costs him about $400 in gasoline. A set of tires, which will last a couple weekends, costs about $2,400. Then, he employs the services of Autoworks Unlimited to make sure his M3 is running in top shape, make any repairs and offer a sounding board for why his driving is doing better or worse. And he still wants to add a carbon fiber hood and trunk, a proper wing, composite windows in the rear windows and a few more things to the car. It’s not a cheap habit. But the cost, to Veteran, is justified.

He’s not into the racing element. There’s a Miata club within the Drivers Club that race all-things-said equal Miatas in actual races seven to eight times a year. That’s not Veteran’s thing. He’s here to fine-tune his driving ability. He’s here to enter into moments of total concentration. He’s here to be, for three to four hours on a track day, completely enthralled, mentally and physically and emotionally, in the moment. He craves those spikes in mental acuity that only come from something that is life-and-death and that demands full attention. He craves, for a few moments of glory, being a race car driver.