Described by the World Registry of Cobras & GT40s as “the only Mk IV to be caught in a snowstorm,” the car driven by Bruce McLaren and Mark Donohue to a fourth-place finish at the 1967 24 Hours of Le Mans will be appearing at the 2016 Greenwich Concours d’Elegance, scheduled for June 3-5 at Roger Sherman Baldwin Park in Greenwich, Connecticut. Jim Glickenhaus is passionate about driving the cars in his collection, so much so that his Ford GT40 Mk IV, chassis J6, has racked up over 50,000 miles in street driving since his acquisition of the car in 1990. 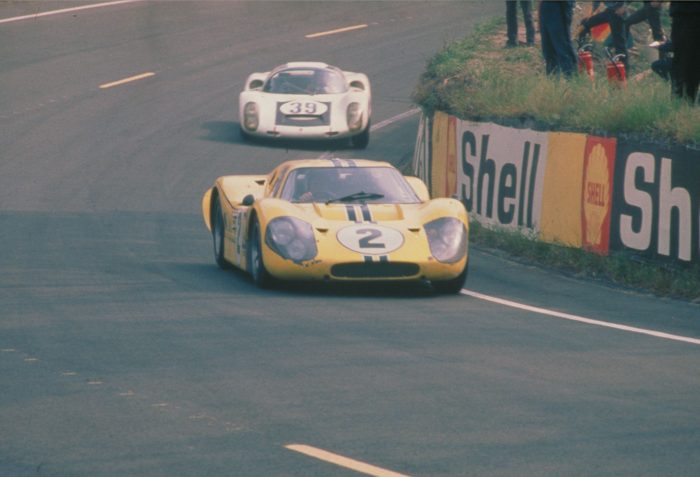 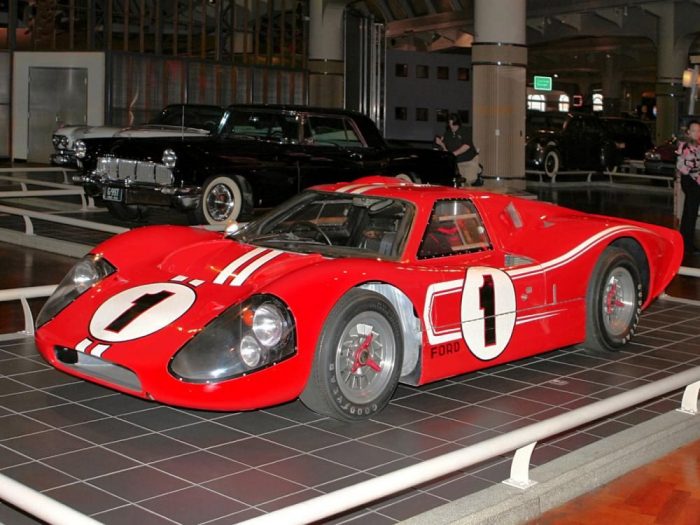 Blame the post-race celebratory confusion for the mix-up. Following Ford’s second win in two years at the Circuit de la Sarthe, the automaker quickly repainted J6 in the winning car’s red livery, and shipped it out on tour with famous drivers as part of a promotion for Hathaway shirts. While at the time the car lacked the distinctive “Gurney bubble” on the roof, few consumers thought to look that closely, and for one reason or another, the car eventually became known as the race winner (when, in fact, J5 was the winning GT40 Mk IV). 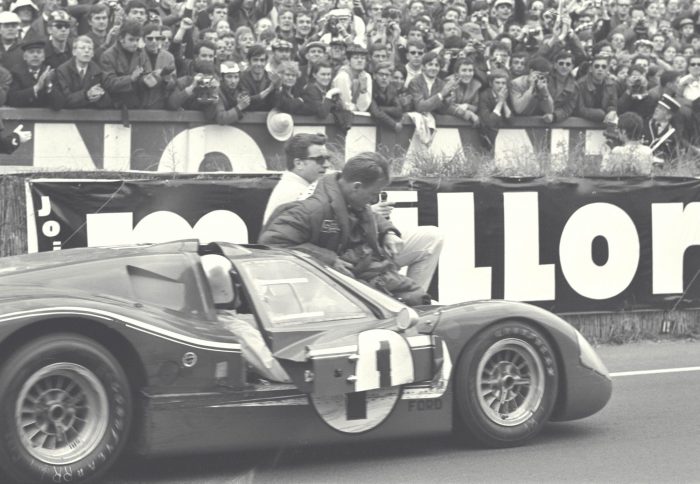 A.J. Foyt drives J5 to victory lane with Dan Gurney on the hood.

As Jim began to research J6, a few things didn’t add up. First, the front bodywork of the winning car was cracked when Gurney and a few crew members climbed on the car, with Foyt still at the wheel, after the race win. While J6 wore a replacement nose, another car, on display at The Henry Ford in Detroit, had a crack in exactly the right spot. This car, J5, also had both a Gurney bubble and a lowered driver’s seat, giving further clues that J5, and not J6, was the race-winning car. 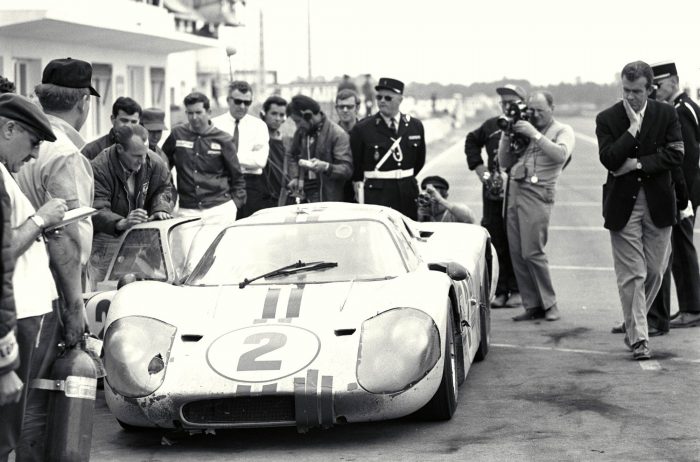 Bruce McLaren taking the wheel of J6 during a pit stop.

Perhaps the most conclusive evidence was the repair work carried out at the rear of J6. During McLaren’s time at the wheel, the rear-hinged bodywork of the car tore loose on the Mulsanne Straight, prompting McLaren to throw his helmet at the car in disgust before retrieving the wayward body panel. Back in the pits, the crew hastily made repairs with aluminum, pop rivets and duct tape, prompting a protest from the Ferrari team. Bodywork, per the rules, had to be easily removable, and the repairs to J6 clearly violated this mandate in the eyes of the Scuderia.

Called back to the pits, J6 was repaired again, reportedly with new front-mounted hinges crafted from an alligator belt liberated (under protest) from Carroll Shelby. Despite the repair-related delays, J6 would complete 359 laps, a performance strong enough to deliver a fourth-place finish, behind the winning GT40 Mk IV of Gurney and Foyt and the second and third-place Ferrari 330 P4s. 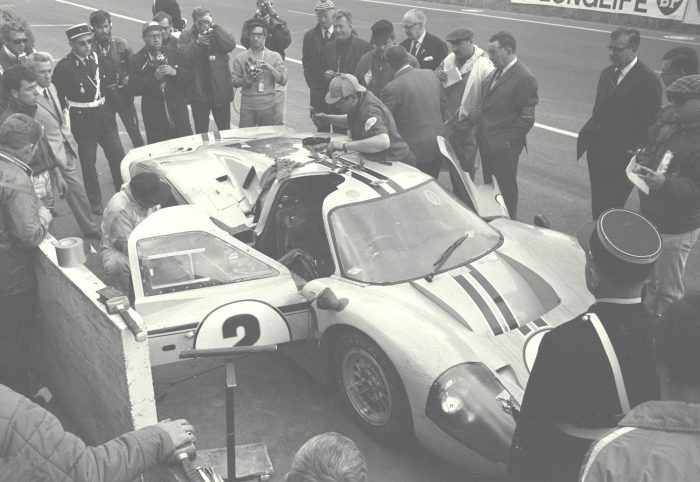 Jim’s car carried evidence of both the rear bodywork repair (though not Shelby’s alligator belt) and a dent from what may have been McLaren’s helmet. Now convinced he owned the fourth-place car, Jim commissioned a restoration to the car’s 1967 yellow livery, with a few concessions towards modern driveability.  The suspension was softened and the ride height increased, and air conditioning was added in a nod towards passenger comfort. The Gurney bubble, reportedly added during Les Lindley’s ownership from 1976 to 1988, was left intact, giving those lucky enough to drive the car just a bit more headroom. 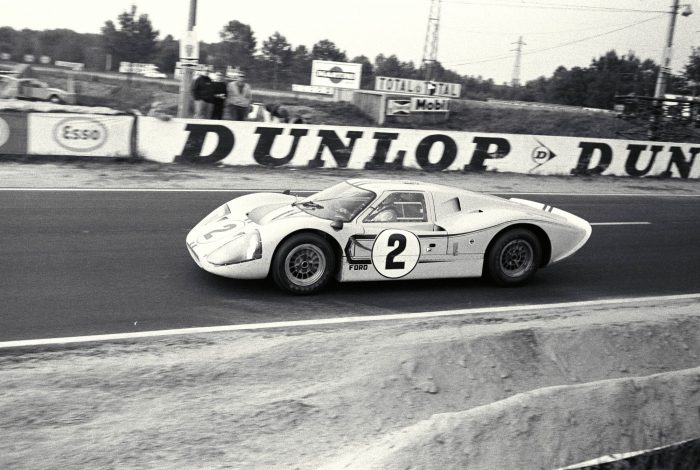 Since acquiring J6, Jim has exercised it regularly on the highways and backroads of the New York metro area (and occasionally into Vermont, where he was once caught in a snow squall with the car). Shots of the car in traffic on New York’s Tappan Zee Bridge, for example, can be found with a quick image search. Despite the heavy use, the car is said to retain its original engine, gearbox and chassis plate, and it’s a safe bet that J6 will be driven to this year’s Greenwich Concours, not hauled on a trailer.

The 2016 Greenwich Concours d’Elegance will also celebrate the 50th anniversary of Ford’s 1-2-3 finish at the 1966 running of the 24 Hours of Le Mans, and other noteworthy Fords scheduled to appear include the Mustang III concept car, a 1965 Shelby 427 Cobra competition roadster, and a one-owner 1966 Ford G.T. 350 with over 185,000 miles on the odometer.