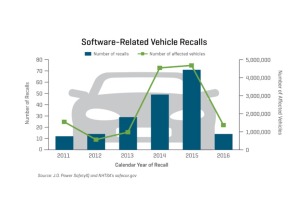 SafetyIQ, an online application developed by J.D. Power that integrates National Highway Traffic Safety Administration data with the research firm’s own automotive data, shows that software-related formal complaints by consumers so far in 2016 are at least on par with this time last year.  Software-related vehicle safety recalls are on the rise, according to a new analysis by J.D. Power SafetyIQ.

J.D. Power notes that over the past five years, consumers have registered a total of 2,011 formal complaints related to automotive software with the National Highway Traffic Safety Administration.

“Consumer complaints are the canaries in the coal mine for automobile manufacturers when it comes to anticipating future recalls and longer-term customer satisfaction,” said Renee Stephens, vice president of U.S. Automotive at J.D. Power, in a statement. “Software-related problems have become much more prevalent and, if not addressed, could begin to erode consumer trust in new automotive technology.”

SafetyIQ reveals a clear connection between consumer complaints and recall decisions, with the number of recalls increasing at a rate similar to the number of formal grievances filed.

J.D. Power’s analysis shows that 189 software-related recalls have been issued over the past five years affecting more than 13 million vehicles, most involving the vehicles’ powertrains, electrical systems, cooling systems and control systems. Of those, 141 recalls were said to present a risk of crashing, and 44 had the potential to cause injury.

Although car shoppers may be wowed by the latest vehicle technology, such as on-board connectivity and systems automation, some of the latest tech trends have already been the cause of some concern among consumers.

For example, as previously reported by Edmunds, connectivity has brought along with it the threat of hacking, which some motorists fear could cause them to lose control of a vehicle and possibly result in a crash.

A U.S. Senate report last year concluded, “There is a clear lack of appropriate security measures to protect drivers against hackers who may be able to take control of a vehicle or against those who may wish to collect and use personal driver information.”

And the rapid development of self-driving technology has caused additional concern on the part of consumers.

As recently noted by Edmunds, a study by the University of Michigan Transportation Research Institute found that 45.8 percent of motorists surveyed were skeptical of the idea of a fully autonomous vehicle and said they preferred no self-driving capability at all.

Only 15.5 percent of survey respondents expressed trust in the technology and said they would accept a completely autonomous vehicle.

In a presentation at this year’s Consumer Electronics Show, J.D. Power representatives stated, “Trust takes years to build, seconds to break and forever to repair.” The answer, they said, is for automakers to ensure that as new technology is rolled out it is “simple, intuitive, safe, and easy to use for all — first time,” and then trust will come naturally as consumers gain familiarity with the latest tech features.

Edmunds says: While this J.D. Power analysis shows that software glitches are increasing, it also demonstrates the power of formal complaints by consumers.