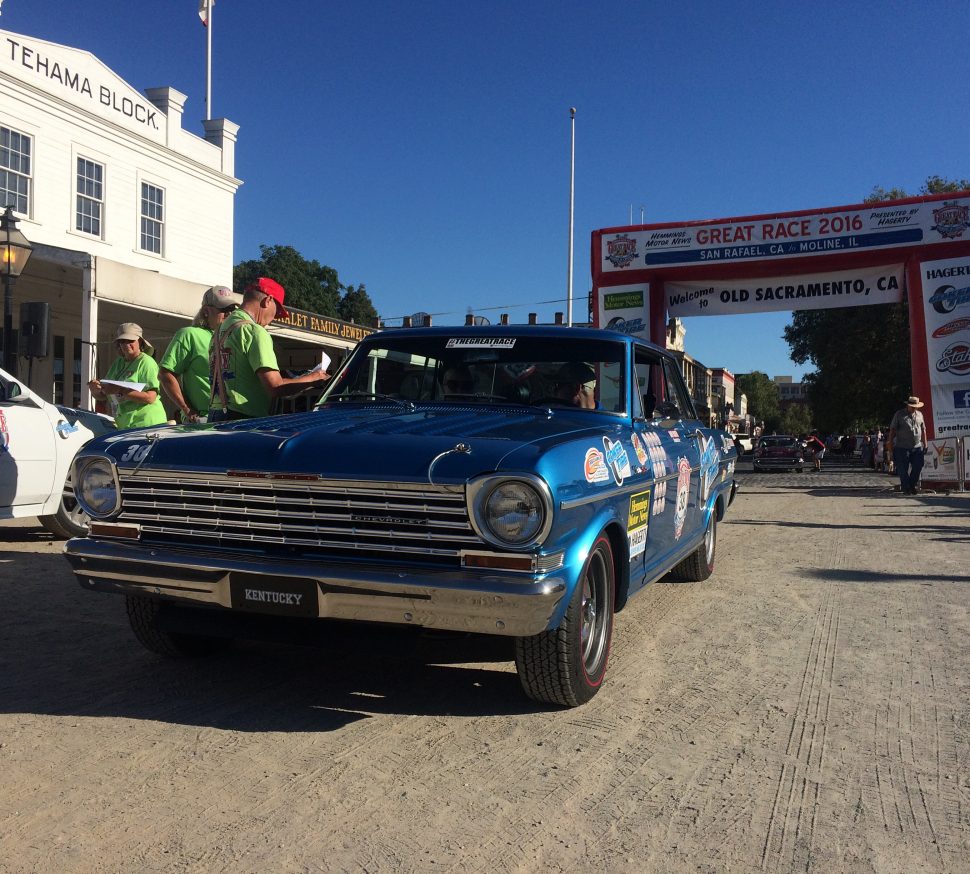 Editor’s note: The 2016 Hemmings Motor News Great Race, presented by Hagerty, kicked off last Friday with the Hagerty Trophy Run. Senior editor Matt Litwin is reprising his support role on the Hemmings Team, and will be providing us with dispatches from the road throughout the race. Below is his recap for Friday’s Trophy Run and Saturday’s first stage.

Day one comes to a close in Old Sacramento, California. Photos by author.

The 2016 Hagerty Trophy Run – the traditional Friday afternoon preliminary to the Great Race – was won by 2004 Grand Champions G.R. Pike & Robert Hadskey in their 1916 Hudson Indy Racer, with a time of 7.26 seconds off perfect. Many teams complained of tremendously rough roads, forcing several cars to make quick repairs during the evening. Team Hemmings fell victim to the route, and we would like to thank the staff at Johnny Franklin Mufflers for their welding assistance with a repair after the Hagerty Trophy Run.

Other class winners were:

The first day of the 2016 Great Race received a tremendous send-off from those who gathered on 4th Street in San Rafael, California. At 10 a.m., the green flag was dropped, sending more than 110 competitors on their eastbound trek, with a lunch stop in Vacaville before the day’s stage finished in Old Sacramento.

When the scores were tabulated, Gary & Jean Ann Martin, veteran competitors in the Expert Division, collected the Stage win with a time just 2.91 seconds off perfect in their 1964 Chevy Nova; they also accumulated three Aces (each representing a perfect leg time of zero seconds off perfect).

Other division winners for the day were as follows:

1st in the Sportsman Division and 2nd overall were Ed Habetz/Thomas Regan with a time of 8.58 seconds.

1st in the Grand Champion (former overall Great Race winners) and finishing the day 3rd overall were Dave Reeder and Sawyer Stone in their 1916 Hudson four-passenger Speedster with a time of 9.24 seconds off perfect.

In the Sportsmen Rookie division, it was Eric Frankenberger and Aaron Read in their 1941 Ford pickup, with a time of 11.64 seconds.

The team from Ponca City took the X-Cup division stage win in their 1956 Buick Century – the college crew posted a time of 27.90 seconds, good enough to place them 30th overall.

Team Hemmings put in a solid performance in the 1932 Ford Speedster, posting a time of 20.25 seconds, putting us 18th overall and 6th in the Sportsmen division.

For full results go to GreatRace.com.