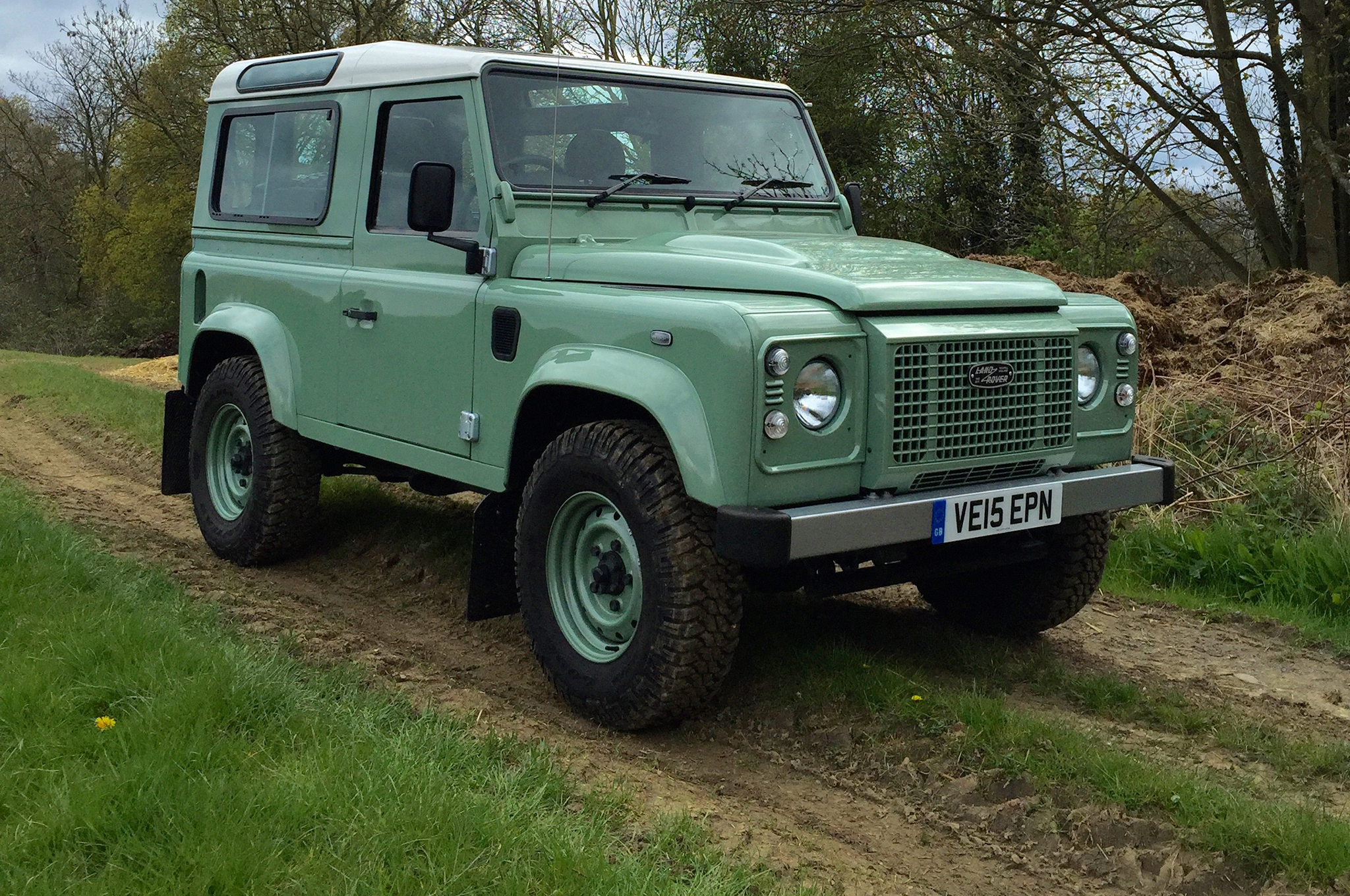 Even after 40 years the muscle memory kicks in. The left leg pushing the springy clutch pedal to the floor through its circular arc; the left arm out almost at waist height to find first gear, then reaching down past the left knee for the e-brake; the awkward stomach crunch as you guide the stubby lever to the floor. The 2016 Land Rover Defender 90 Heritage is a kinder, gentler version of the battered 1960 ex-Australian-Army Series II in which I learned to drive. But it’s essentially the same car.

The large diameter steering wheel sits atop a non-adjustable steering column set at exactly the same angle, and there’s the same lack of self-centering from the worm-and-roller steering; you have to consciously wind off lock as you exit tight turns. There are other 40-year-old ghosts in the machine: The bouncy cadence to the fore-aft pitch as it rides the bumps in the highway, the metallic slap from the driveshafts as you get on and off the gas. 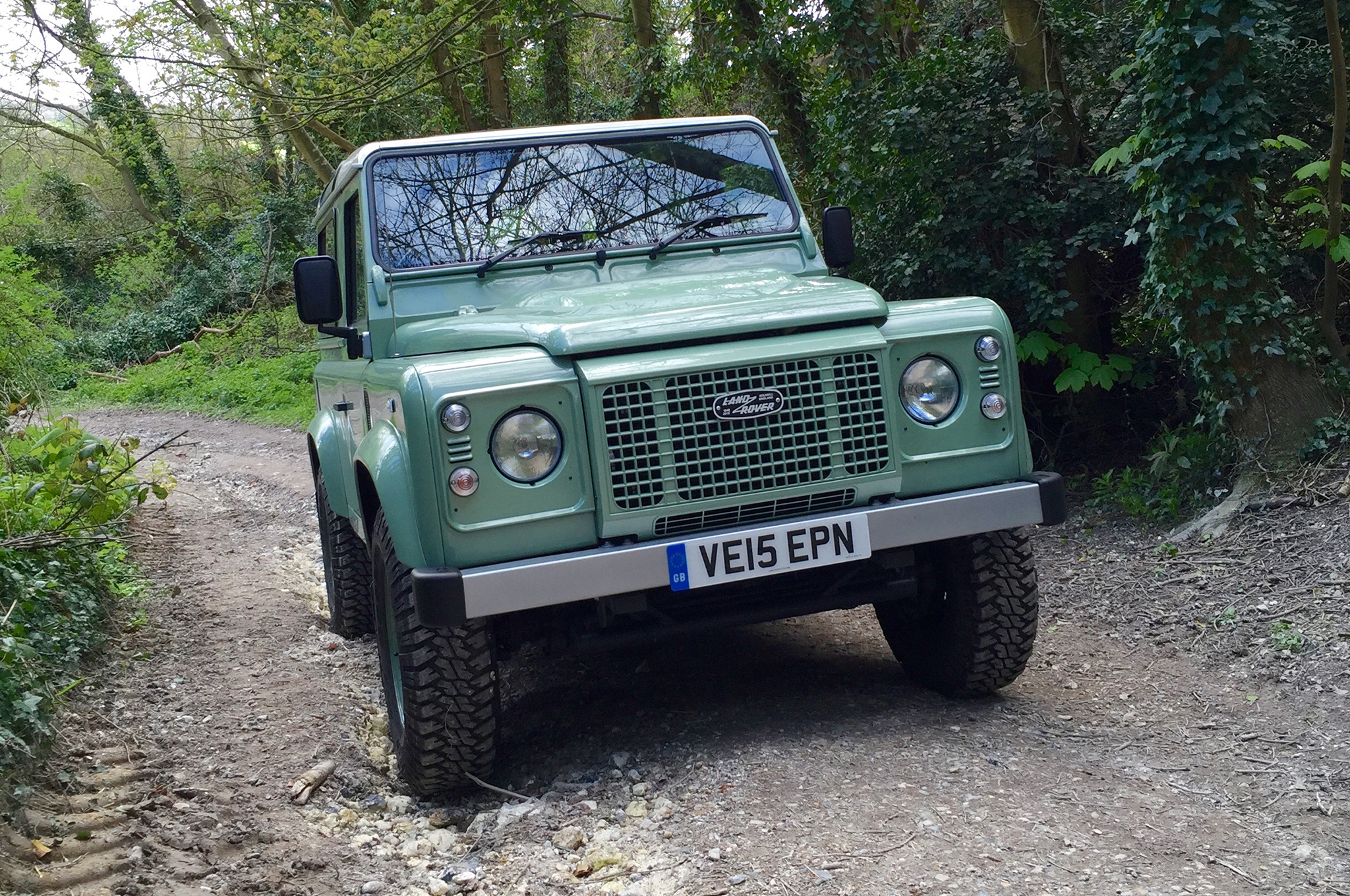 Yes, the 2016 Defender 90 Heritage has fancy heated bucket seats instead of foam slabs, the transmission has synchromesh on first and second gears, there are coils instead of cart springs on the axles, and there’s even air conditioning, power windows, power steering, carpet on the floor, and a CD player. This Land Rover has been revised and refined and reinvigorated over decades, but underneath is an old soul that has traveled pretty much anywhere on this planet it’s possible to take a wheeled vehicle. It doesn’t feel world-weary, though. It feels experienced, the Anthony Bourdain of automobiles.

The Defender 90 Heritage is also the last of the line; the last iteration of a vehicle originally launched back in 1948. Inspired by the WWII Jeep—the prototype was built on a Jeep chassis—the original Land Rover was developed by British automaker Rover as a means of getting its factories back to producing civilian products, no easy task in a country exhausted and virtually bankrupted by war. Steel was rationed, so the Series I Land Rover’s simple body panels were made from aluminum left over from wartime aircraft production. Even the green paint was war surplus.

The Land Rover was designed to be a workhorse for farmers; for many years it was available with a power take-off unit to run agricultural equipment. Myriad military versions were built, some stripped down for service with elite special forces units, others fitted with an extra axle and six-wheel drive. From the 1950s through the 1970s, Series I, II and III Land Rover wagons and trucks were the vehicles of choice for NGOs and mining companies and adventurers in Africa, Asia, South America, India, and Australia.

Land Rovers went everywhere, did everything, were used by everyone, and along the way became a uniquely classless automobile—even today, that mud-spattered Defender you spot in an English village could belong to the local farmer, a rock star, or a member of the royal family. Winston Churchill drove a Land Rover. So did Steve McQueen. The Queen still drives one.

On January 29, the last Defender rolled off the assembly line in Solihull, England, where Series and Defender Land Rovers had been built continuously for 68 years – 2,016,933 of them. Appropriately, it was a 90 Heritage Soft Top, a car that still shared two parts with the 1948 model – the hood cleats and underbody support – and was fitted with the H166 HUE license plate transferred from the pre-production Series I the company still owns. It was the grand finale to a last hurrah for the Defender that included a run of special-edition models: 100 high-end Autobiography versions, 600 Adventures with special paint, alloy wheels, snorkels and roof racks, and 400 Heritage models, all available as either 90 (two door, short wheelbase) or 110 (four door, long wheelbase) models. 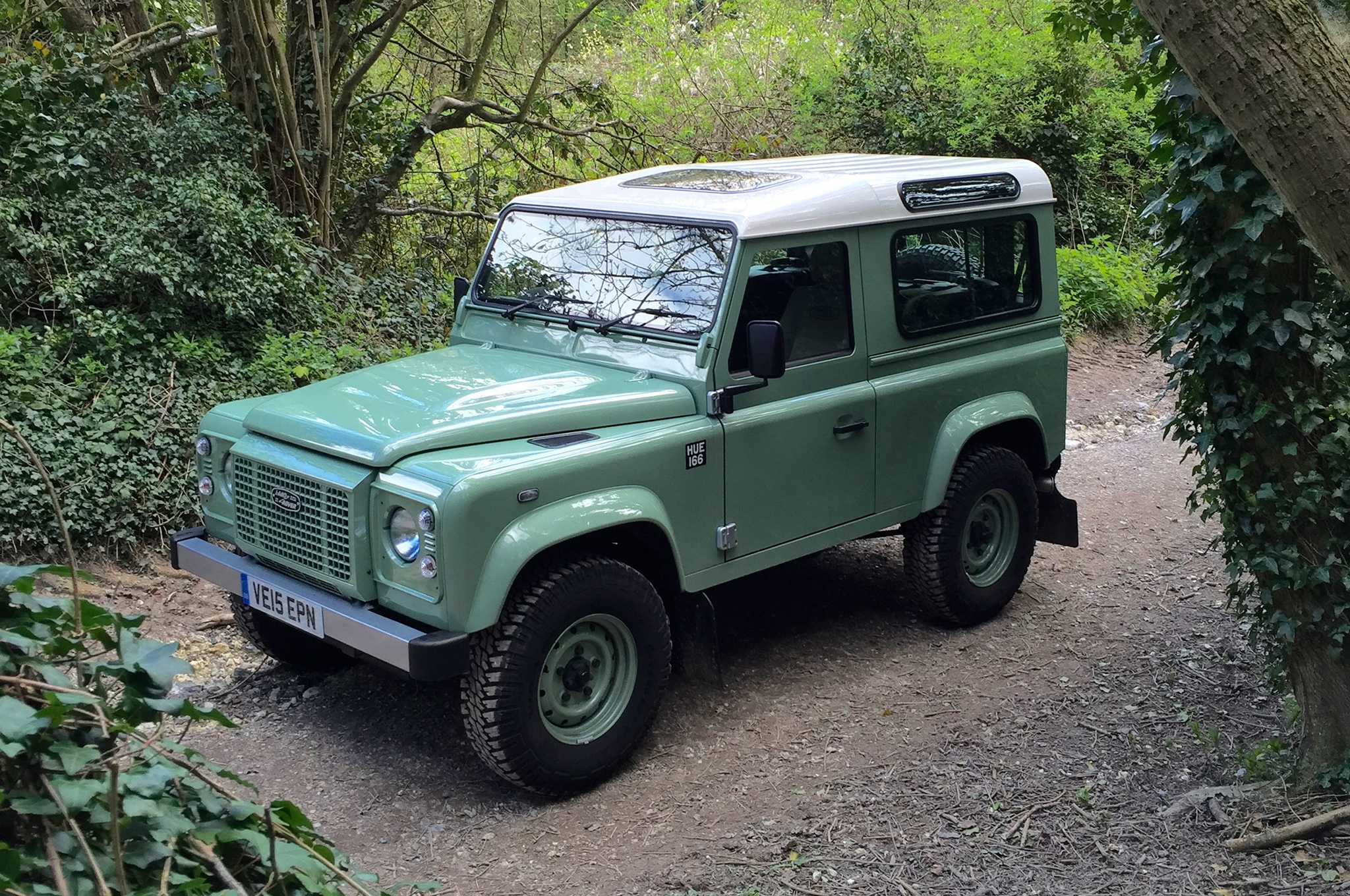 Like all Heritage models, our short-wheelbase Station Wagon tester comes only in Grasmere Green – a pale shade that replicates one of the original Land Rover colors – with a white roof, and is only available with 16-inch steel wheels and tall-sidewall Michelin Latitude Cross tires.

OK, it’s not really perfect, at least not by any rational measure. Unless you live deep in Montana or Mozambique, you don’t need an old-school, hard-core off-roader that will growl up the side of a mountain or across a trackless desert, and you probably won’t put up with the many compromises daily-driving a Defender demands. It’s slower, noisier, and rougher riding than today’s Jeep Wrangler, and the cabin is from an era before automakers discovered ergonomics. It’s a million miles away from a Ford Explorer buyer’s idea of what an SUV should be, but if you understand where the Defender comes from, what it represents, and what it can do, it is more involving to own and drive than almost any other off-roader. And as Defenders go, it’s certainly the best of the breed.

Defenders have had five, six, even eight-cylinder engines, but the 90 Heritage closes the loop, and takes Land Rover back to its roots with a four-banger under the hood. Though it develops a relatively modest 120 hp at 3500 rpm, the Ford-sourced, 16-valve, 2.2-liter turbodiesel makes the F-head 1.6-liter four that powered the Defender’s 1948 ancestor look truly ancient. There’s 265 lb-ft of torque on tap from just 2,000 rpm, and with the help of the six-speed manual transmission, it delivers a respectable 27.7 mpg combined (on the more optimistic European consumption tests) despite the 4,200-pound curb weight and brick-outhouse aerodynamics.

Old Land Rovers ran in two-wheel drive on the road because there was no center differential in the four-wheel-drive system. High range four-wheel drive was engaged by pushing down on a yellow knob – at slowish speeds – and a red-topped lever was used to shift between high and low range while the vehicle was stationary. The Defender 90 Heritage has full time four-wheel drive. A small lever to the right of the shifter locks the center diff with a flick to the left at speeds up to 40 mph, and selects high or low ranges at speeds up to 5 mph.

With approach and departure angles of 47 degrees, the ability to cruise over obstacles 12.7 inches tall and proper off-road tires, the Defender is almost unstoppable off-road, though with a conventional manual transmission, steel springs, and none of the advanced electronic driver aids that make even Bentleys and Jaguars surprisingly competent in the rough stuff these days, you have to know what you are doing to get the best out of it. Which, like owning a stick-shift Porsche these days, is a big part of the Defender’s appeal, of course.

As tested, this last of the line Defender 90 Heritage was priced at the equivalent of $45,000 in Europe. But you can’t buy one – all 400 were quickly snapped up, and low mileage pre-owned ones are now commanding as much as $70,000. An all-new Defender, a vehicle built off the same high-tech, aluminum intensive architecture as the Range Rover Sport and the next-generation Land Rover Discovery, is due to appear in 2018 and will be coming to the U.S. Fully compliant with modern crash and emissions regulations, it’ll be a safer, more sanitized Defender. But if Land Rover can capture the essence, the authenticity, of the 90 Heritage—simple, functional, timeless design combined with outstanding off-road capability—it may still be hugely desirable.