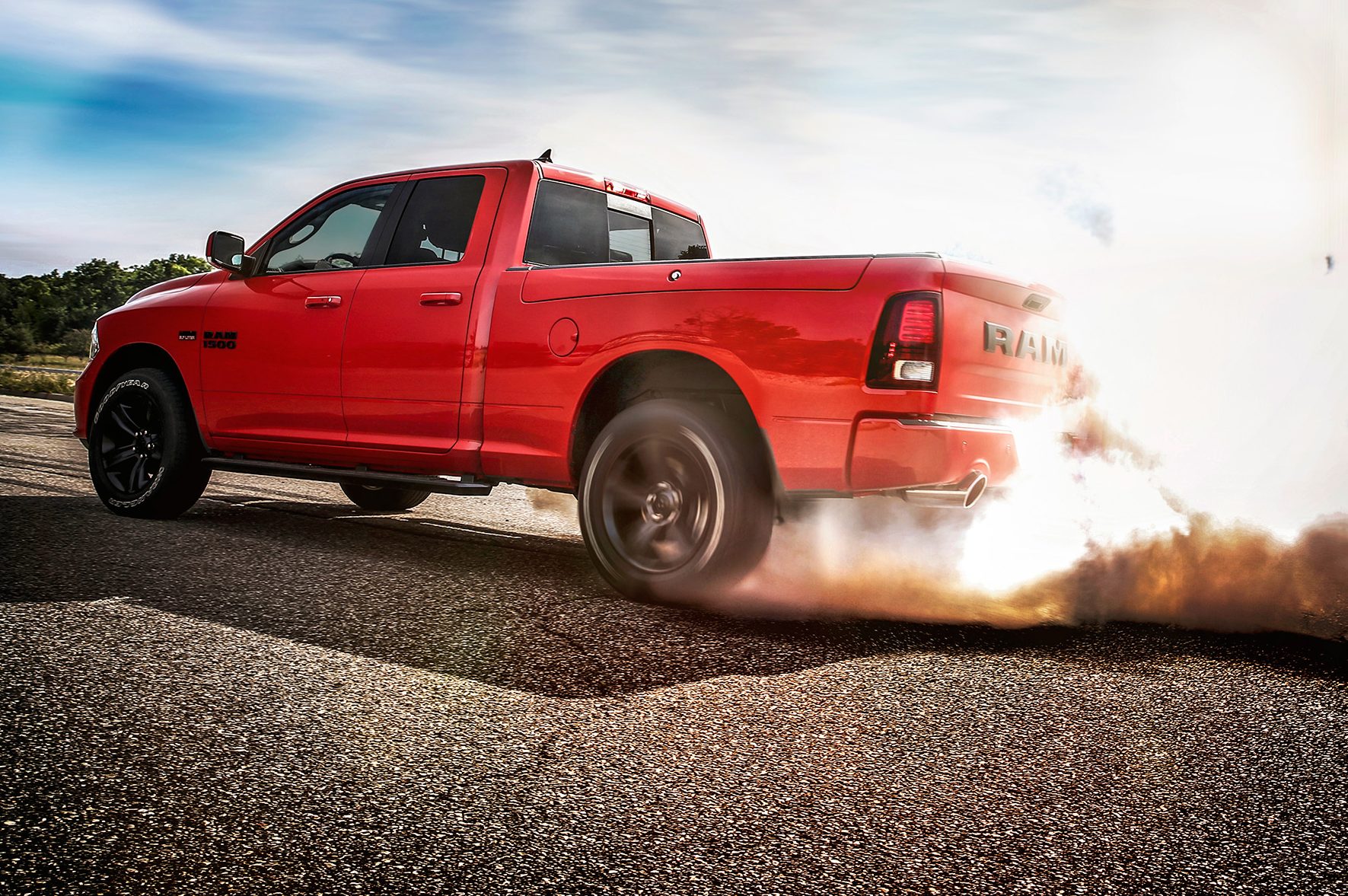 Maybe it’s a natural reaction to all the political fear mongering that naturally attends a presidential election year, or maybe it’s just a case of fashion trends coming back around, but it would seem that black is indeed “the new black”—at least in the truck world. Over at Chevy you’ve got your Black Out and Special Ops editions of the 1500 Silverados and the sinister Midnight HD for the heavies, and your Ford dealer offers the F-Series Black Ops for F-150 or F-250 trucks, a completely murdered-out Armageddon on wheels built by Ford upfitter Tuscany, of Elkhart, Indiana.

What about Ram? Well, you can simply order a Ram 1500 Rebel painted black and accomplish essentially the same look, but the Rebel’s not for everyone. So for 2017 Ram is offering a Night Edition, which starts out on the Sport trim and adds a new Black Sport Group package that brings a sport performance hood, a gloss-black grille, blackout headlamps borrowed from the Rebel, black badges, and 20-inch aluminum wheels in—you guessed it—semi-gloss black. It’s available with regular, quad, or crew cab configurations, and it also includes dual-zone climate control and a premium nine-speaker audio. May we recommend the Brilliant Black Crystal pearl-coat paint?

As these packages go, this one is modestly priced, adding just $0,000 to the price of a similarly equipped Ram Sport. Chevy charges $1,750-$1,850 for Black Out and $3,395 for Special Ops on its work trucks, and the killer F-150 Black Ops starts at $79,900 out the door. (Note that starting last year, Ram has offered a similar package, which retailed for $3,025 but came without the sport hood, on its lower-line Express pickups.)

Our Ram 1500 Night crew cab test sample was further upgraded with two items from the Mopar catalogue: a cat-back exhaust system ($1,175) and a cold-air intake package ($792 including the adapter for the performance hood). These devices are said to add noticeable horsepower, but Mopar is cagey about quoting changes to the peak ratings. Mostly they fatten these curves at the lower end, adding perhaps 5-10 hp at various points, and because they reduce air-flow restriction, they’re also alleged to improve fuel economy, though here again, no EPA percentages are offered. What they mostly do is unmuffle some of the glorious music the 5.7-liter Hemi V-8 naturally produces—like opening the bathroom door to better hear Gerald Finley singing in the shower. 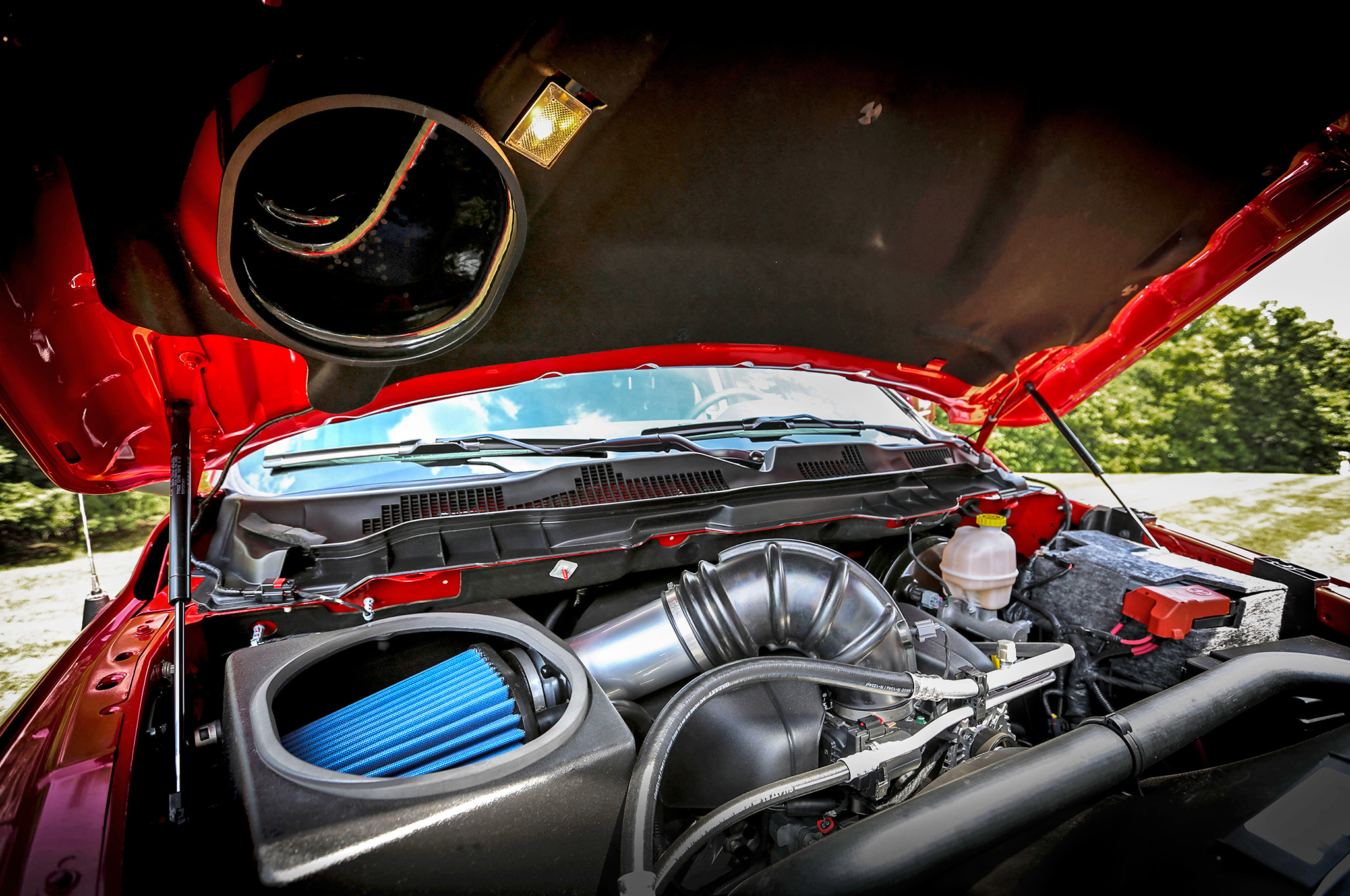 The added aural excitement coming from the engine room may inspire one to attack a twisty road like the dynamic handling circuit at Chrysler’s Chelsea proving ground a bit more aggressively than a pickup truck with no Mopar handling enhancements might otherwise warrant. Under such circumstances, we can report that the big bruiser leans precipitously in every turn, its hapless tires screaming in protest, but in point of fact the truck hustles around such a circuit remarkably well. The coil-sprung rear suspension allows engineers a bit more latitude in tuning body roll using traditional anti-roll bars. The leaf springs typical of most other pickups provide inherent (and hence less tunable) roll resistance. And of course, on Chrysler’s tortuous ride assessment surfaces, the articulation and increased freedom of the axle to move still ranks the Ram in a category of its own for comfort and compliance.

Most other upgrades for 2017 Ram trucks include additional standard features, such as a new 5-micron cabin air filter for all; remote start and a security alarm for Sport models; LED bed lighting, keyless go, auto high-beam, and rain-sensing wipers added to Laramie Longhorns; and automatic temperature control for Bighorn models. (Heavy-duty Ram upgrades for 2017, including the Power Wagon and Off-road package, were introduced at the Chicago Auto Show.)