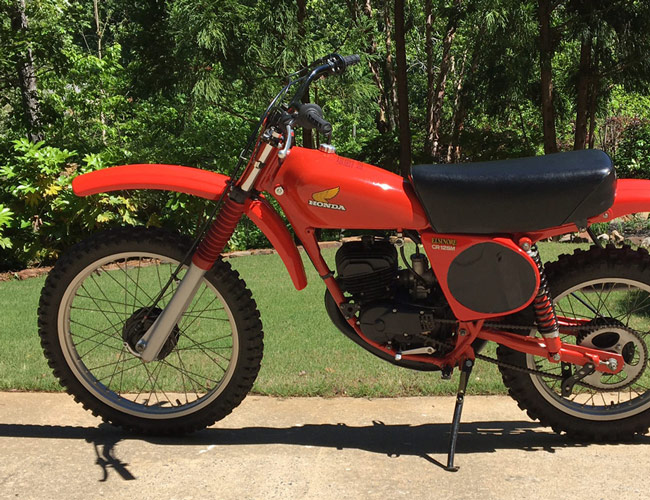 One night, earlier this month, while flipping through late night TV for something to have on in the background while I finished up drafting a story, I came across a delayed taping of the Mecum Motorcycle Auction in Las Vegas. At first, I felt kind of foolish because I had no clue Mecum auctioned off motorcycles, let alone televised it. How could I not know this existed? I began watching pristine bike after pristine bike cross the block. Not two minutes later, my jaw was on the floor — not because the final bids were so astronomically high, but because these mint-condition vintage bikes were going for an absolute pittance.

Of course, later in the auction, there were big-ticket bikes commanding close to or over $100,000 bids — old Harley-Davidsons, Vincent Black Shadows, prewar Indian race bikes and basically anything Steve McQueen so much as breathed on. But the true gold mine was the insane plethora of immaculate ’70s dirt bikes and scramblers that no one seemed to care about. A ‘73 Husqvarna went for $2,250, a ‘74 Suzuki for $600, a ‘70 Yamaha for $500. Every bike that rolled across the screen seemed like an ideal candidate for my “next bike.” And that’s when I looked up and saw it. A spindly, little red Honda — a 1977 Honda CR125 Elsinore, to be exact. I recognized the bike immediately.

As far as collectibles are concerned, the CR125 isn’t a particularly valuable bike; it’s not rare. In fact, quite the opposite. It was one of the most ubiquitous bikes of the era because it was so damn good and everyone had to have one. In 1974, Cycle World’s review said of the bike, “Honda has literally set a new level of motocross excellence in motocross machinery that will have the rest of the industry straining to match it, much less surpass it.”

The CR125 isn’t a particularly valuable bike; it’s not rare. In fact, quite the opposite.

Before I was born, my parents lived in Sayreville, New Jersey, in a townhouse in an unfinished suburban neighborhood. That meant more than a few wide-open acres of dirt, grass and hills. Perfect terrain for my brother Ron to learn to ride the ‘77 CR125 Elsinore he’d rebuilt himself — his first bike, ever.

One winter, my mom snapped a picture. There was a little snow on the ground, no leaves on the trees, my brother off in the distance on the CR125 — near identical to the one Mecum dropped the hammer on for $5,000 in the Vegas auction.

I remember growing up and seeing that photo, only wanting to learn to ride more each time I looked at it. Then, on my nineteenth birthday, Ron just showed up to the house on a ‘94 Kawasaki Ninja 250, surprising me with my first bike…which I thought he was going to teach me how to ride before handing over the keys. “You know how to ride a bicycle, don’t you? And you can drive manual? It’s just like both of those at once. See? You know how to ride.” I tossed on a helmet, threw a leg over the bike, took a minute to rewire my brain and reassign my limbs for throttle, braking and shifting duties, and not a second later I was ratcheting through the gears, bombing through my neighborhood, buzzed on adrenaline.

The author’s brother on his Honda CR125.

Maybe it’s because my first bike was a “sport” bike, but the bikes I gravitated towards early in my riding career were always the high-strung superbikes. I liked the ridiculous speed, the straight shots of adrenaline, the supercar statistics at a fraction of the supercar price, the radical designs. So for the longest time, the bikes I coveted were the street-legal race bikes. Can you blame me?

Now, after getting into motorcycle journalism and being humbled by the wide array of bikes I’ve been lucky enough to ride, and even though my tastes have broadened, I still generally fawn over high-horsepower liter-bikes. Coveting those MotoGP bikes with license plates.

That is until I saw a tiny, little red vintage dirt bike sell for an approachable $5,000 ($740 new in 1977) — not the $50,000 asking price of the Kawasaki H2R or the $184,000 of the Honda RC213V-S. But it’s more than just the affordable price tag that drew me in. Without the ‘77 CR125 that my brother rebuilt and thrashed around that unfinished housing development, I might not be riding today at all. It’s because of my brother’s love for motorcycles that I share an affection for two-wheel life as well. In a way, that spindly, little red Honda is just as much a part of my history as it is his. It’s not high horsepower, rare or pre-war, and I’m pretty sure McQueen’s ass never rubbed against one. But one thing is for sure: There are ‘77 CR125 Elsinore’s out there. They’re affordable, attainable; it’s now the bike I’m feverishly searching for. I just hope I can pick one up before everyone else catches on.

More From The Grails Issue

An exploration of the products in our lives that are so singular, so special and so intensely personal that no others compare. From brand new multi-million-dollar jets to Brazilian rosewood furnishings, these are Grails. Read the Stories