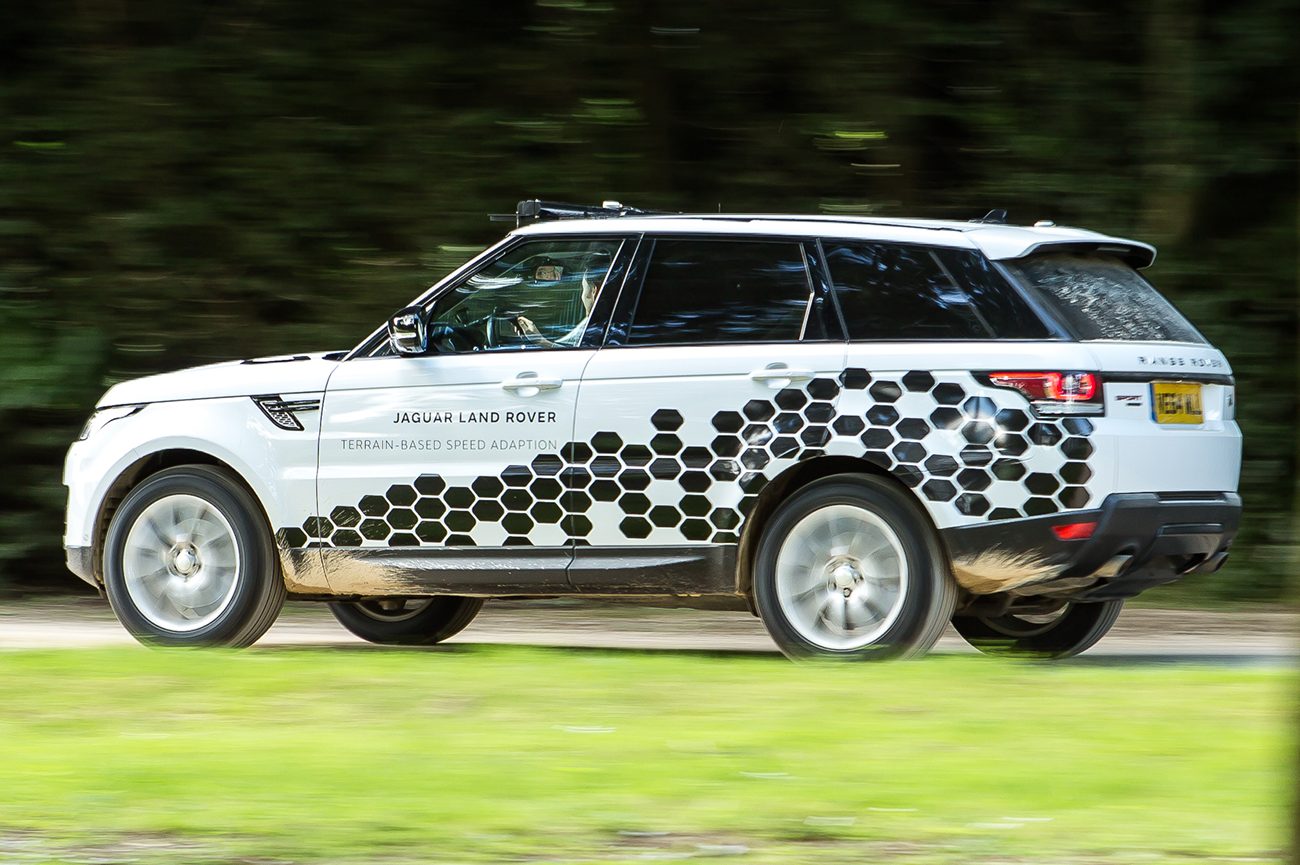 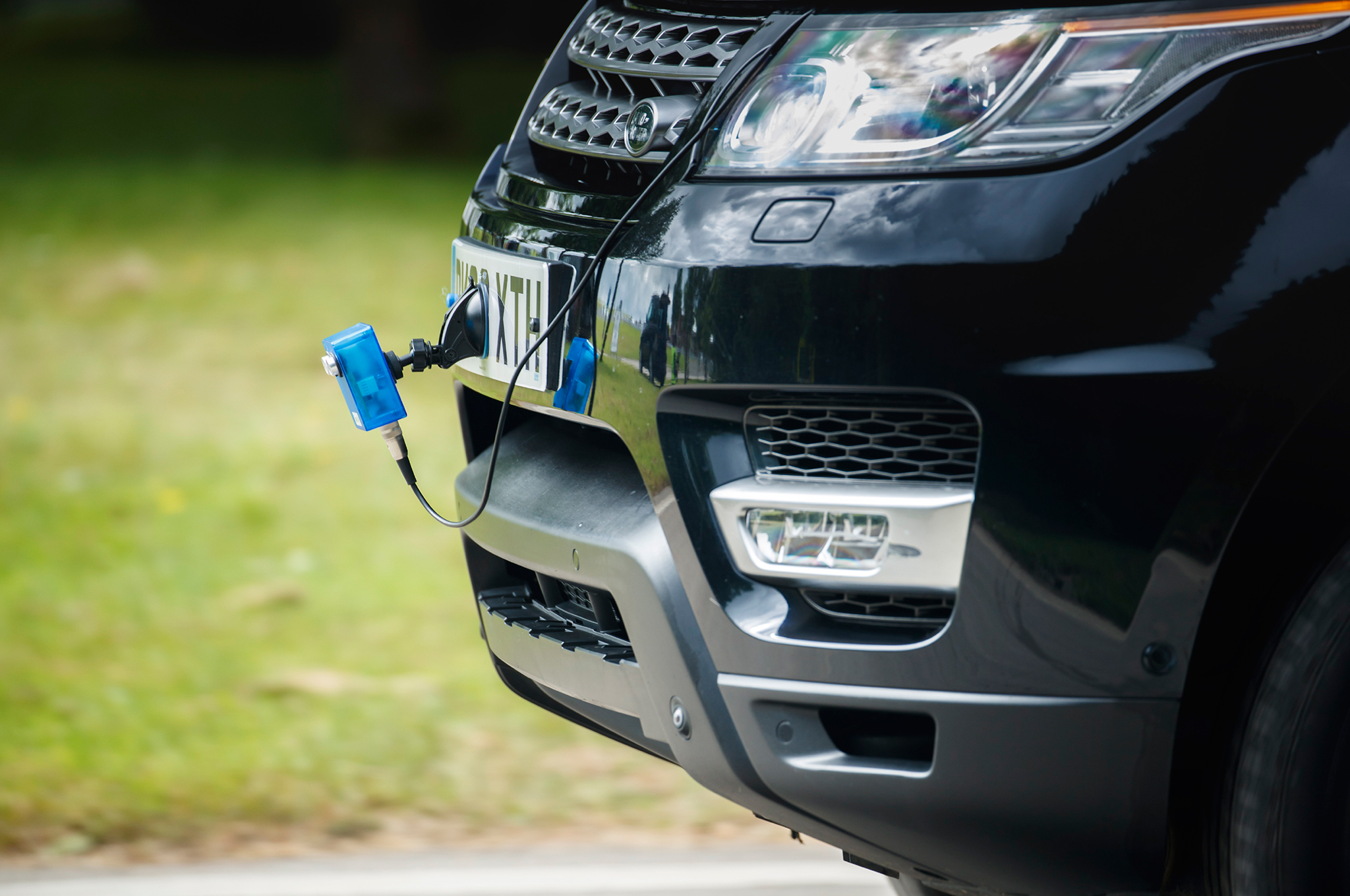 This prototype sensing technology aims to take the guesswork out of determining which Terrain Response mode is most appropriate. Sure, today’s system features an auto mode that attempts to figure out what type of surface the vehicle is traversing, but it only does so after the tires have started grappling with the surface in question. That can be a little late if the change in surface is dramatic enough to result in big wheel-slip. So this technology leverages ultrasonic sensors to read the surface about 15 feet ahead of the vehicle, comparing the results with a look-up table of various samples of sand, snow, ice, grass, gravel, and rocks. Predictively engaging the appropriate Terrain Response mode can help ensure unimpeded progress. The sensors on the prototype test vehicle were mounted at bumper height and angled slightly down, but they are functionally similar to parking-distance sensors. It has yet to be determined if this orientation could be made to work for both Surface ID and parking assist, but especially if this proves possible, this tech could be deployed quite soon. 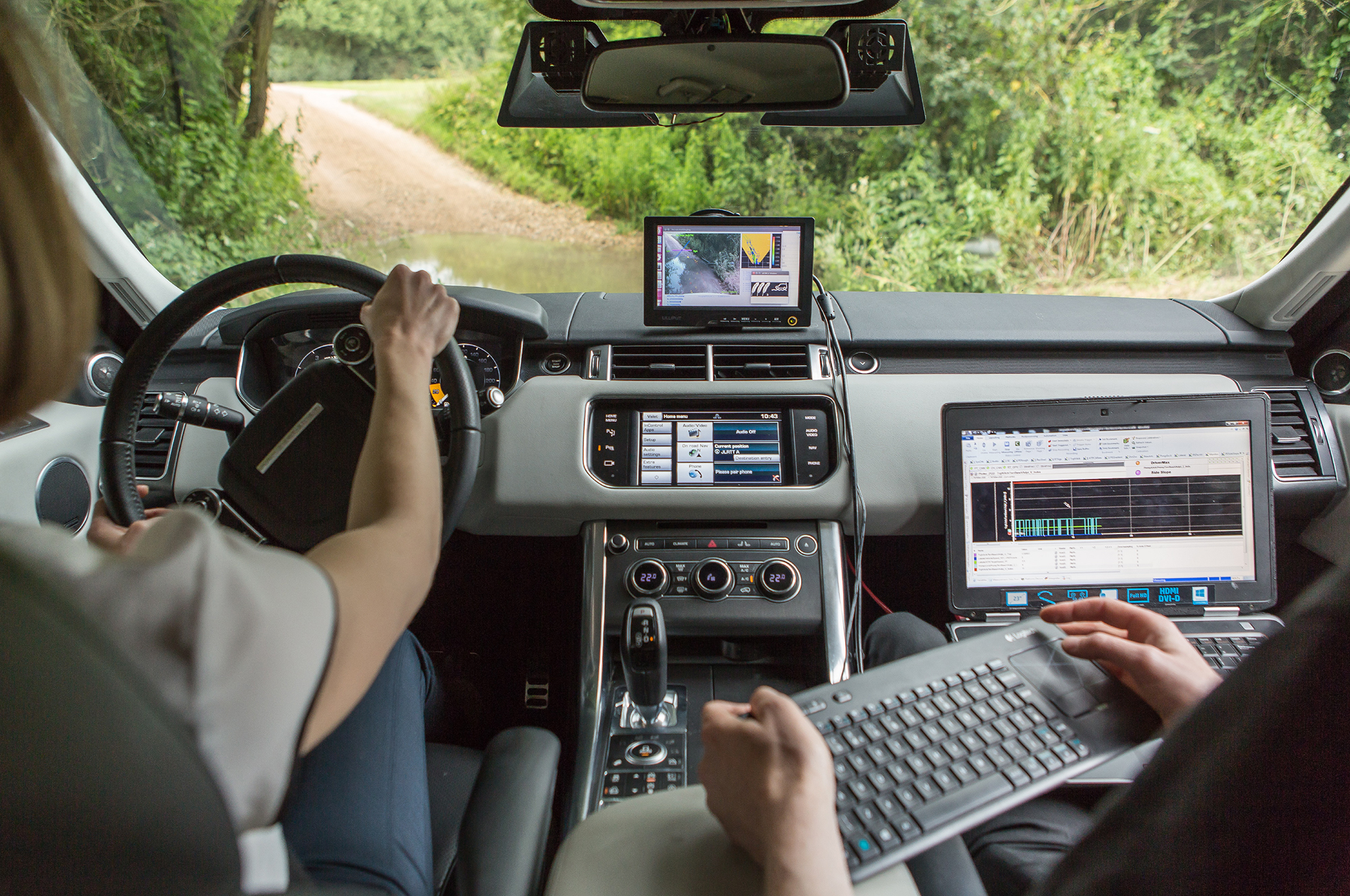 TBSA is a prototype upgrade to Land Rover’s “off-road cruise control” known as All Terrain Progress Control (ATPC, aka All Surface Progress Control on the Jaguar F-Pace). The current systems allow you to set a speed between walking pace and about 20 mph, and the upgrade leverages the onboard stereo camera (which currently contributes to systems such as the adaptive cruise control and automatic emergency braking) to predictively reduce the set speed as appropriate. The cameras scan the road ahead out 100 feet, slowing the set speed for ruts, water crossings, and even foliage that might impinge on the vehicle. Using the adaptive cruise control following-distance switches, the driver can choose to prioritize progress (faster, more aggressive) or comfort (slower, less likely to scratch up the car with foliage). The system also monitors suspension ride-height sensors, steering inputs, parking distance sensors, and even the seat belt inertia reels to assess current actual conditions and alter speeds accordingly. This technology requires only a higher-resolution stereo camera unit and extensive programming, so it could be production-ready quite soon. 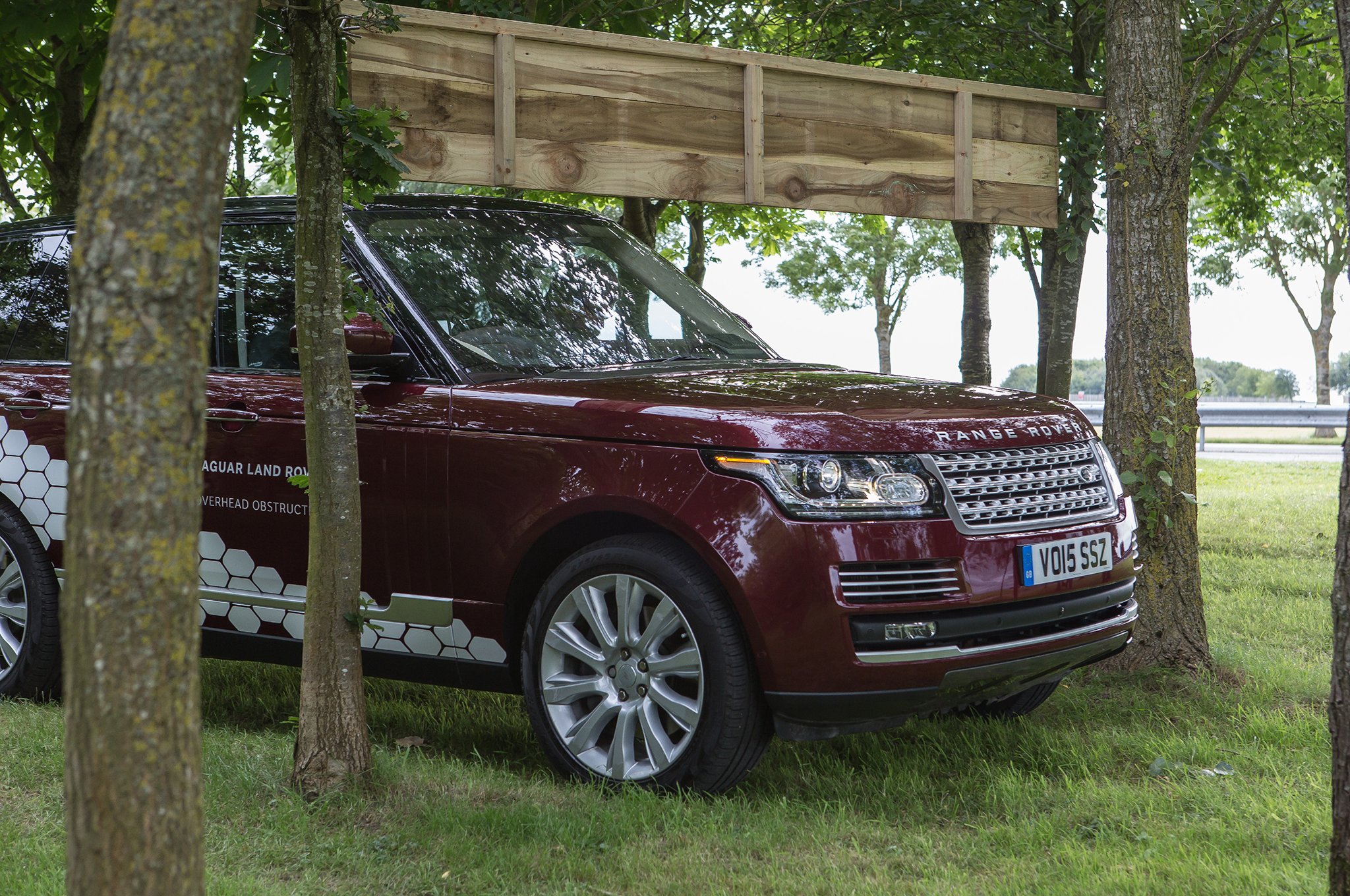 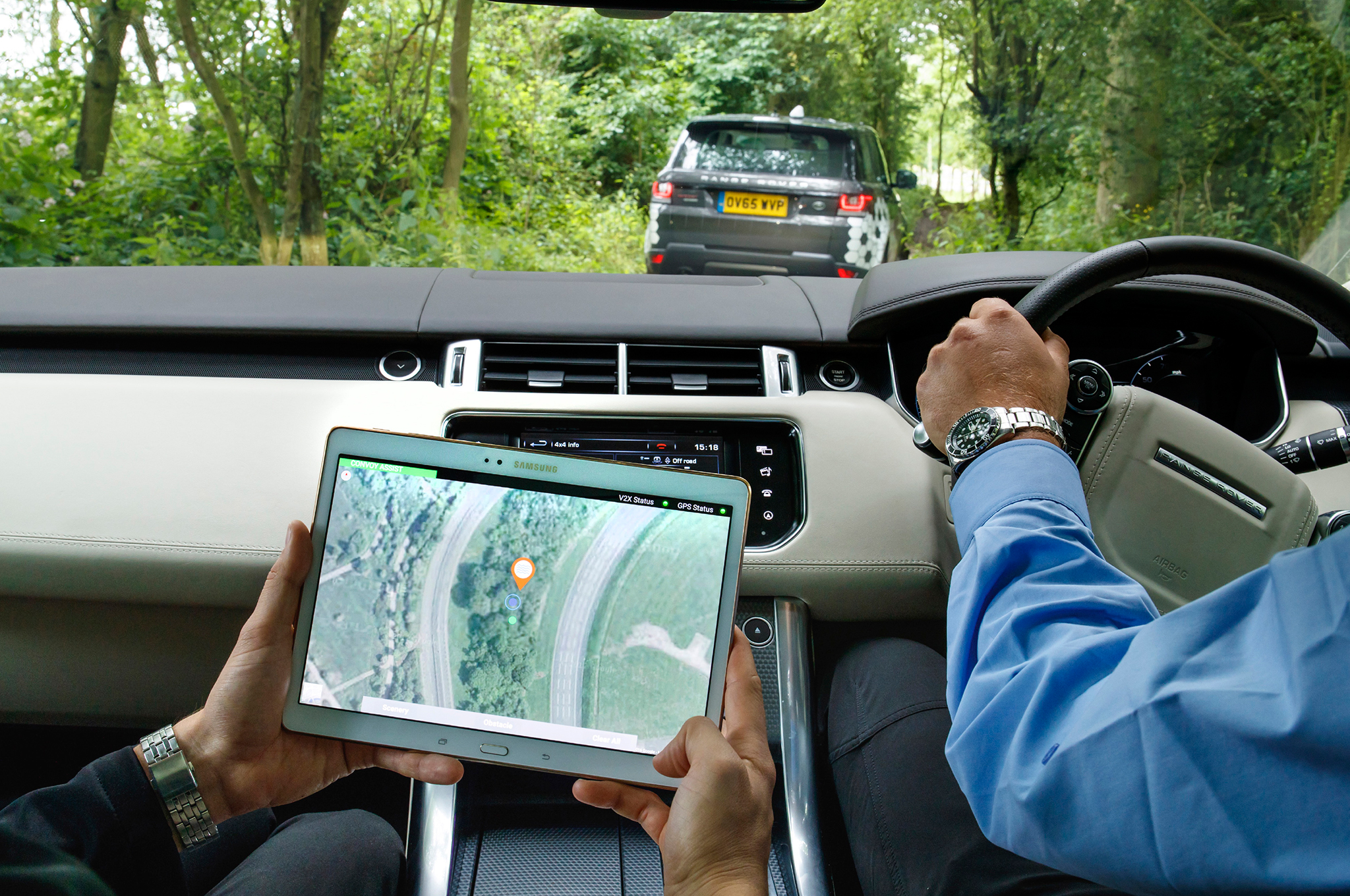 The promise of platooning convoys of closely spaced vehicles roaming our highway is still several years in the future, awaiting greater consensus among automakers and governments as to exactly how the requisite communications between vehicles will be achieved. Most assume that Dedicated Short Range Communications will be a key enabler for this technology, and Land Rover reckons that even before these protocols are fully ironed out, the technology could be employed off-road quite soon to improve safety and comfort for groups of friends heading into the bush—especially if some are less experienced. Once linked via this onboard non-cellular based system, a group of vehicles can remain in communication as long as none is separated by more than three-quarters of a mile (less in very hilly or densely forested areas), as communication from any vehicle is relayed to all others in the group. Information shared on the prototype vehicles included very accurate GPS position information (from which distance between vehicles was calculated), whether ATPC was engaged, and what Terrain Response Control setting was employed on the lead vehicle. Each vehicle can also drop “pins” to indicate things such as a rocky area, water, or blocked road. Lots more Waze-like notifications could be added, and the development team is also eager to have the system share ATPC set speed and vehicle angle (so a following vehicle might know whether the lead car has cleared a steep ascent or descent indicating it was clear to proceed). The system could also be used to automatically engage the Terrain Response Control setting when reaching the same point the lead vehicle changed it. It may even prove possible to share voice and video signals. 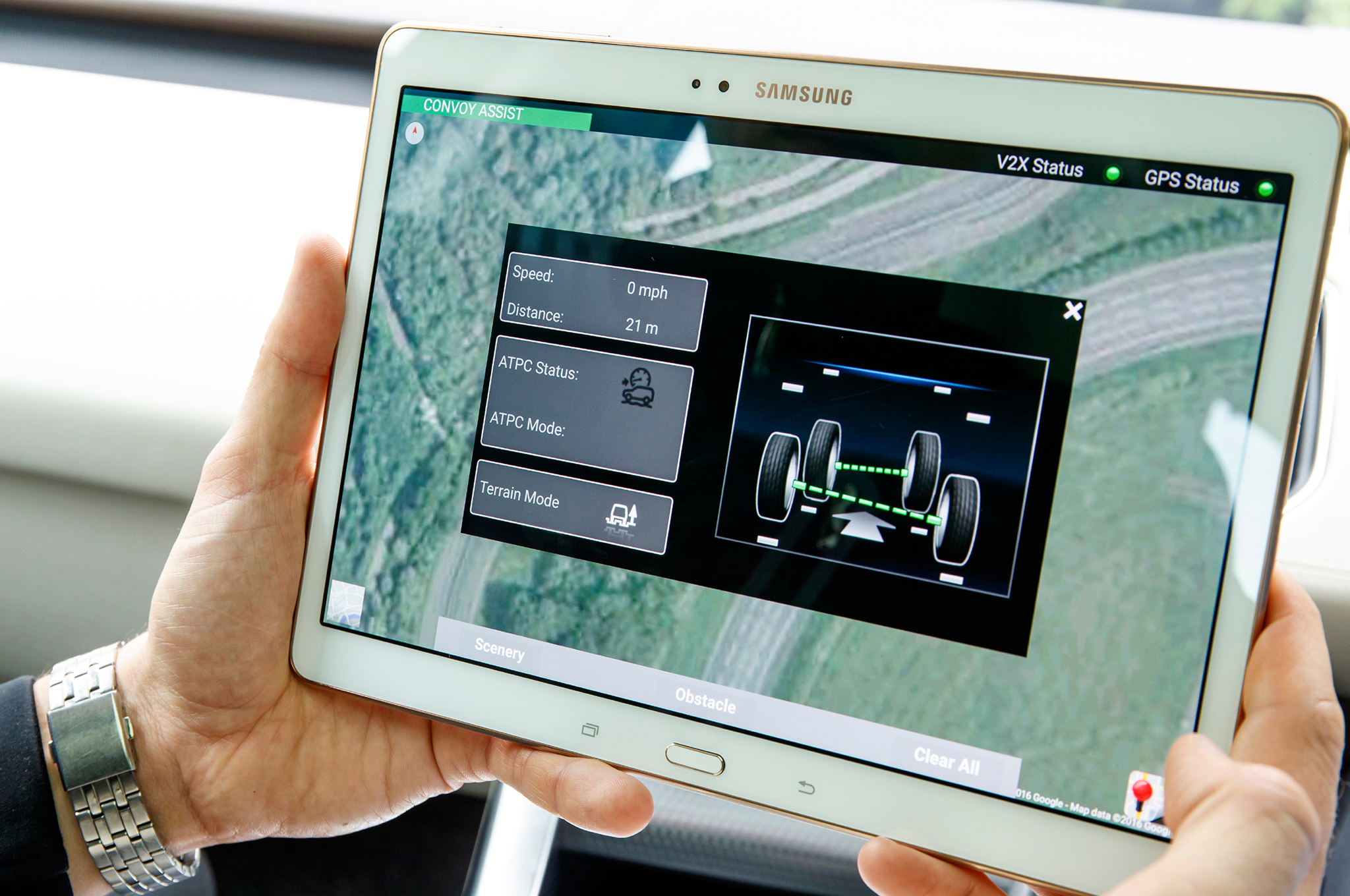 Note that at the same event, Jaguar demonstrated the highway application of this technology, known as cooperative adaptive cruise control, in which considerably more information is shared, particularly brake and throttle inputs. This allows all following vehicles to perform the same tasks in unison, rather than being delayed by the roughly 1-second response time of autonomously sensing the vehicle ahead’s position and speed via radar. This is key to halving the following distance from 0.8 second to 0.4, the benefits of which include reduced fuel consumption due to aerodynamic drafting and greater highway use efficiency.