The man is making a point. Farthest from us is an untouched, stock arm from a late-’60s 911. Next is the same arm, but with a few chunks sheared off and the edges left jagged. Nearest to us is an identical arm, but remodeled with gleaming, fresh welds, customized to fit the shop’s newest creation. These parts form an Emory Motorsports evolutionary chart that demonstrates their philosophy: honor the history of the past, but embrace the performance of the present. Rod Emory lays out three rear trailing arms on the concrete floor in his shop in North Hollywood, California.

“People come to us to get something that no else has the balls to build,” Rod Emory told me as we walked around his shop. “But in the end, they’re still going to get a car that looks like something Porsche built.” (Emory, beaming, tells the the story of a Porsche factory designer at Pebble Beach trying to determine what year he and his design team had built a particular 356 — one that was actually done by Emory.)

Emory started restoring his first 1953 Porsche 356 coupe when he has 14 years old. He was finished by 16, racing it by 17, and started his business by 18, in 1990. “We were drilling holes in the nose, putting fog lights on, putting hood straps on,” Emory said. “People started calling us outlaws.” A shop is born.

Today Emory specializes in building two models: the 356 Outlaw and the Emory Special ($250,000 and $350,000, respectively). The Outlaw retains the lines and shape of the original 356, adding a rally-inspired engine, handling and trim. Conversely, the Special utilizes a 356 body; its lines are significantly modified and its components are modernized using both past and contemporary Porsche parts. And modifications can get even wilder from there: an Emory Special currently under construction for a cycling company executive will include a Porsche 954’s all-wheel-drive capability and space for a bike rack; some include tow hitches to accommodate a small trailer for road-tripping. 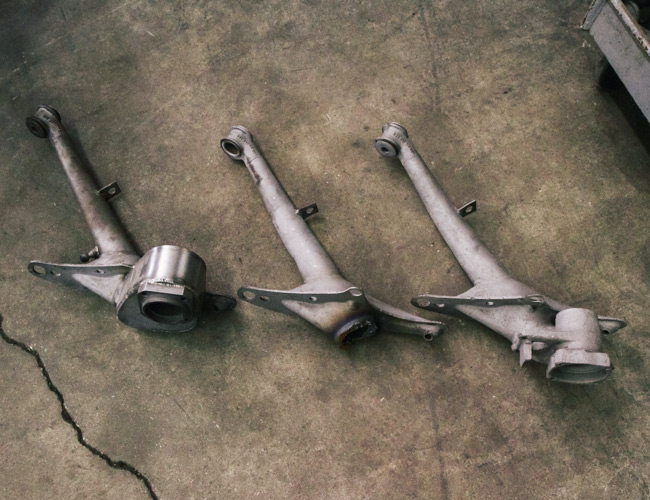 From left to right: An updated Emory trailing arm, a worn 911 arm and an unused 911 arm.

Emory can get his hands on 356’s from all over the world, and keeps some inventory in Oregon, but some customers still prefer to source their own. Regardless, Emory strips the donor car to its core and takes painstaking inventory of each component. Then comes the mediablasting stage; sandblasting might distort some of the precious metal bodies, so Emory uses less aggressive materials, like plastic or walnut shells, to shave off years of rust, grime and paint. Emory then assesses which parts need repair, a simple fix or complete replacement. He also smooths out sloppy, quick fixes that might have been done by other body shops over the years.

“We want to save as much of the original car as possible,” he says. Emory and his team weld small, fresh pieces of metal — weld thickness and style are all done to Porsche specifications using period-specific tools. For panels that were merely warped, distorted, or dented, Emory can reshape them to exact Porsche specifications with a planishing hammer. 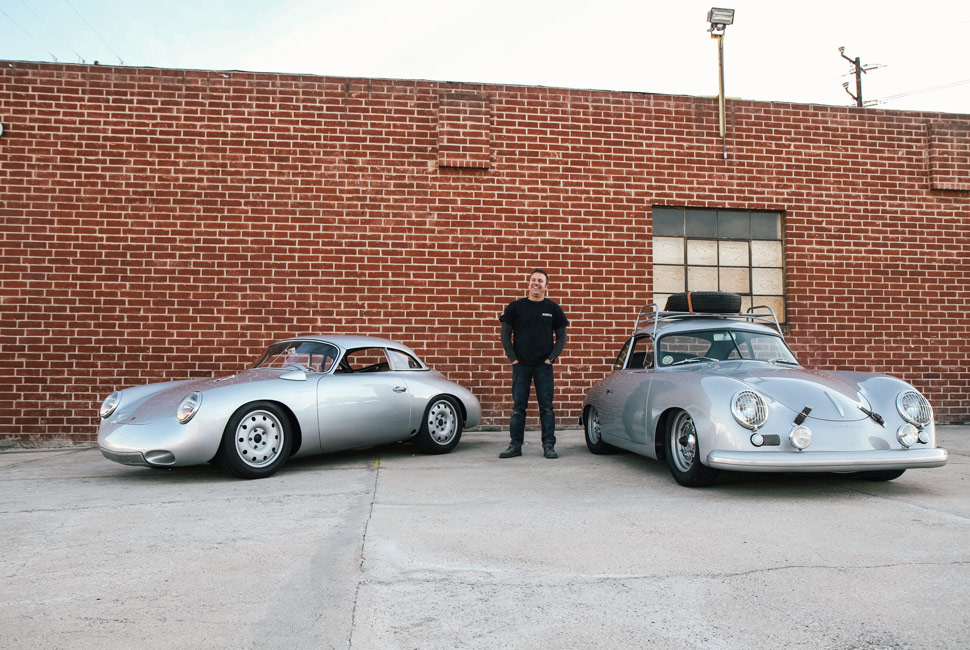 The man himself in front of his Los Angeles workshop.

To produce a Special, Emory uses a wire-frame template to guide body panels into the custom, redesigned shape. In earlier days Rod would spend hours with an English wheel, hammering the sheet metal against the wire buck until it perfectly matched his signature design. All his work gives the car a present-day slant, but adds nothing that would raise suspicion to an untrained eye. “I wanted to take the car and make it look thinner, make it look at speed even when it’s standing still,” Emory says, describing the Special body. “I leaned the nose back, lowered the roof, got rid of the hump in the hood, raised the wheel arches and rolled the door and rocker all the way under. It plays with your eyes.”

One of the most striking features in Emory’s Porsches are the hand-carved louvers on the deck lids. “I’m kind of the go-to guy for specialty Porsche metal shaping,” Emory says, citing his work for Porsche collector Magnus Walker and fellow Porsche wizards at Singer Vehicle Design. To make the louvers, he spends two days hammering a panel of metal by hand, then slicing them into shape with a chisel. Emory, pointing to a few panels, explains that “doing these two is like a week’s worth of work. At the end you have something that looks almost like a piece of art.”

“People come to us to get something that no else has the balls to build.” – Rod Emory

After body shapes are finalized, cars are primed, painted and undercoated. Finally, they are assembled. While the body has been in transition, members of the Emory crew have been building the engine, transmission, wheels and chrome finishes. They’ve been fitting Emory’s Outlaws and Specials with versions of the modern-day 911 six-cylinders, shrunk down to four-cylinders to fit in the smaller 356. Likewise, they mount transmissions — also customized versions of the 911’s, only decreased in size.

“80 percent of components are parts that we’ve restored or modified from the original parts,” Emory says. He takes original Porsche parts and makes them modern, maintaining the yesteryear magic. Things are shortened, mixed and matched all over the vehicle.

By the time Emory finishes a car, he has been toiling over it for nearly a year; cars that enter his shop as rust-bitten heaps leave having had their every inch scrutinized, restored or customized. Dashes, gauges, shift knobs, wheels and even keys are all rebuilt with nods to Porsche’s history. It’s a hodgepodge in the purest of ways, simultaneously representing Porsche’s past and Emory’s present. As each leaves his garage, Emory’s only request is that his creations stay on the roads. “I don’t want to build a car that’s not going to get used,” he says. “I want these guys to drive them.”

Up the Hudson in Emory Porsche #1 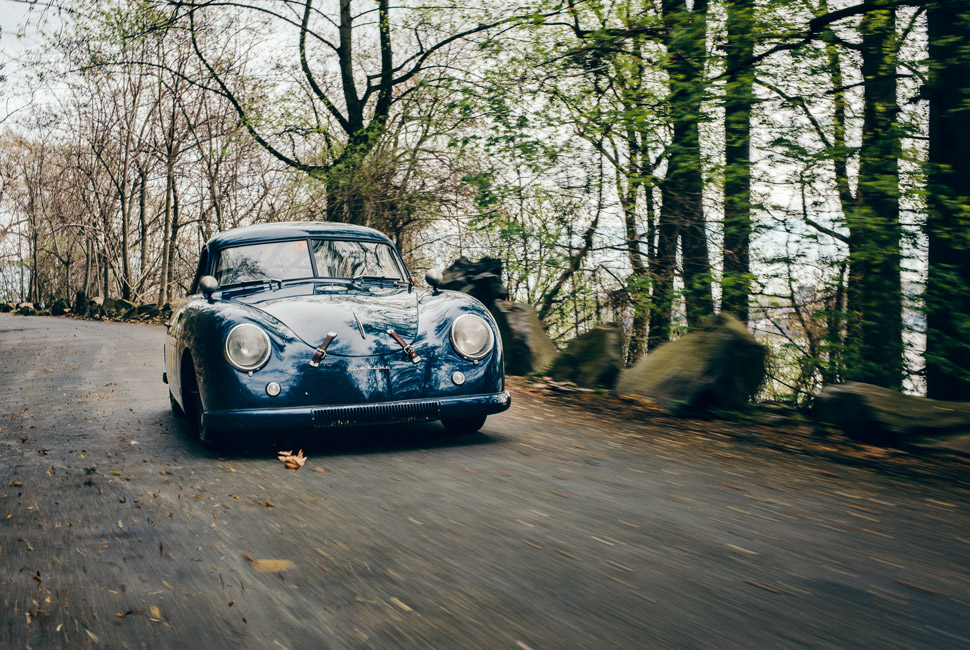 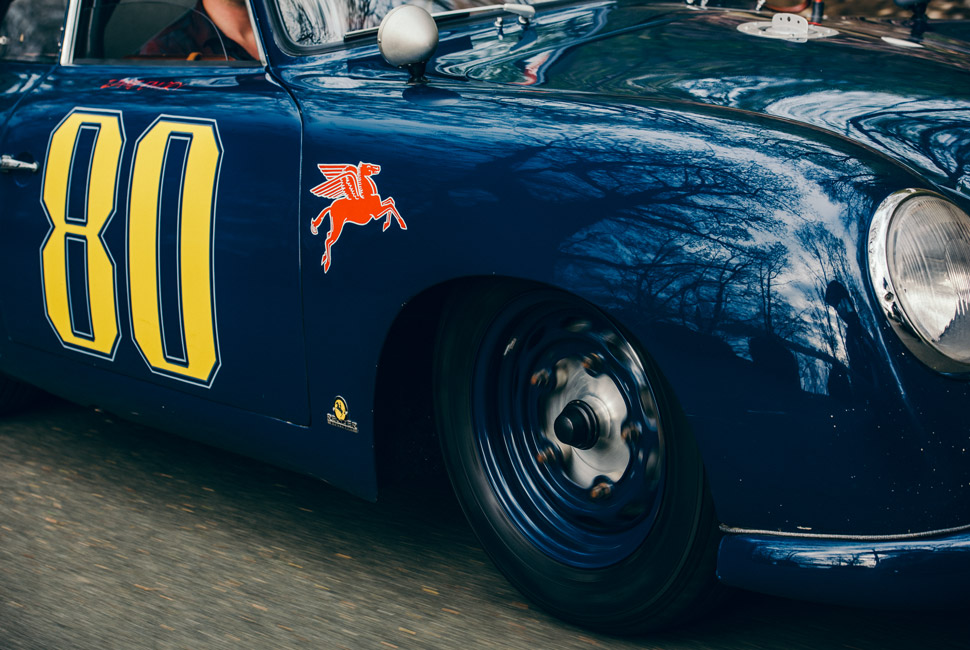 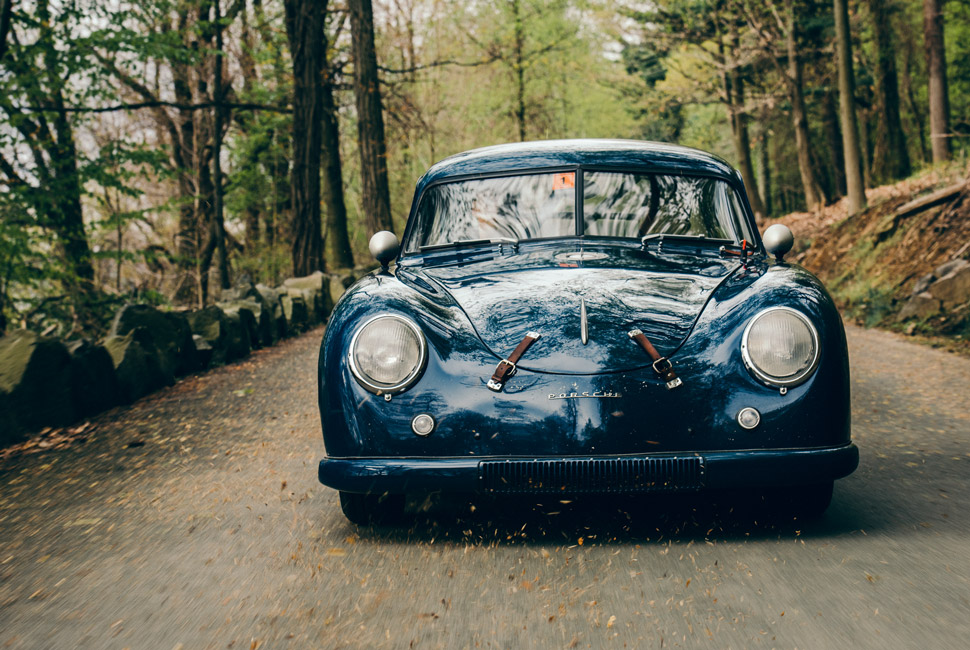 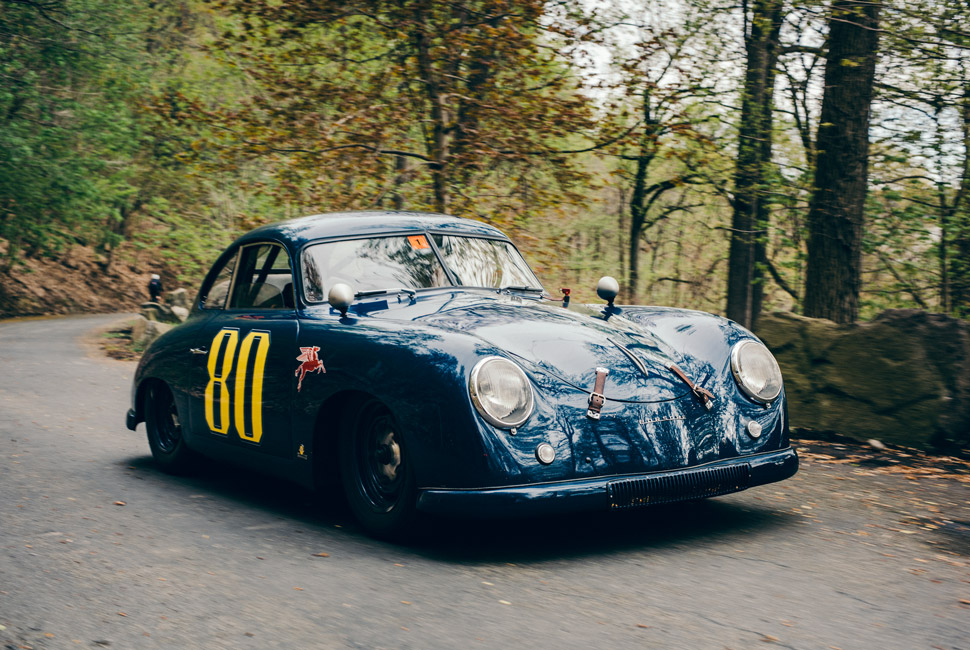 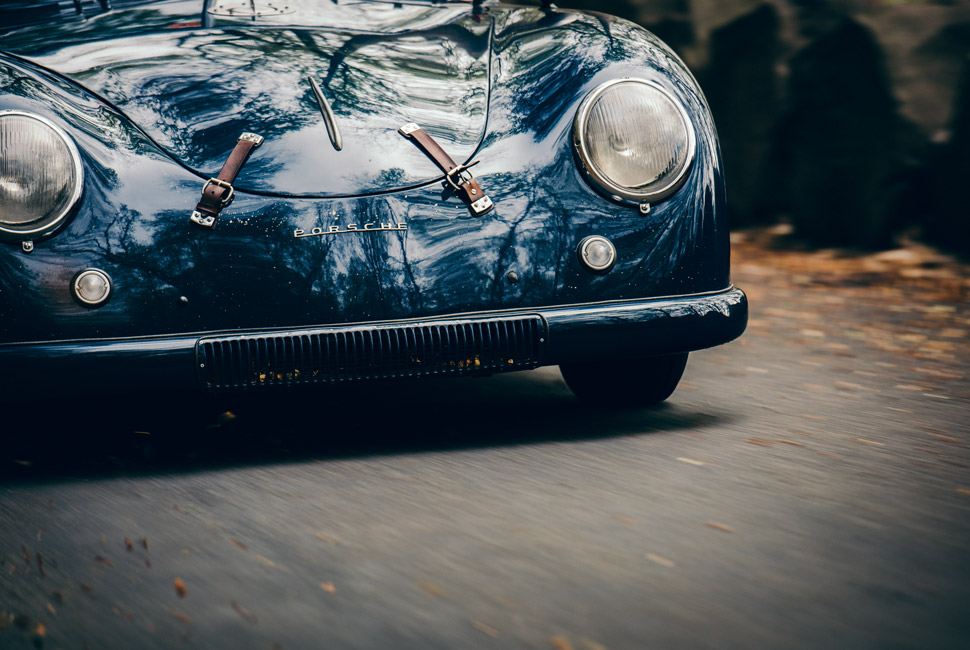 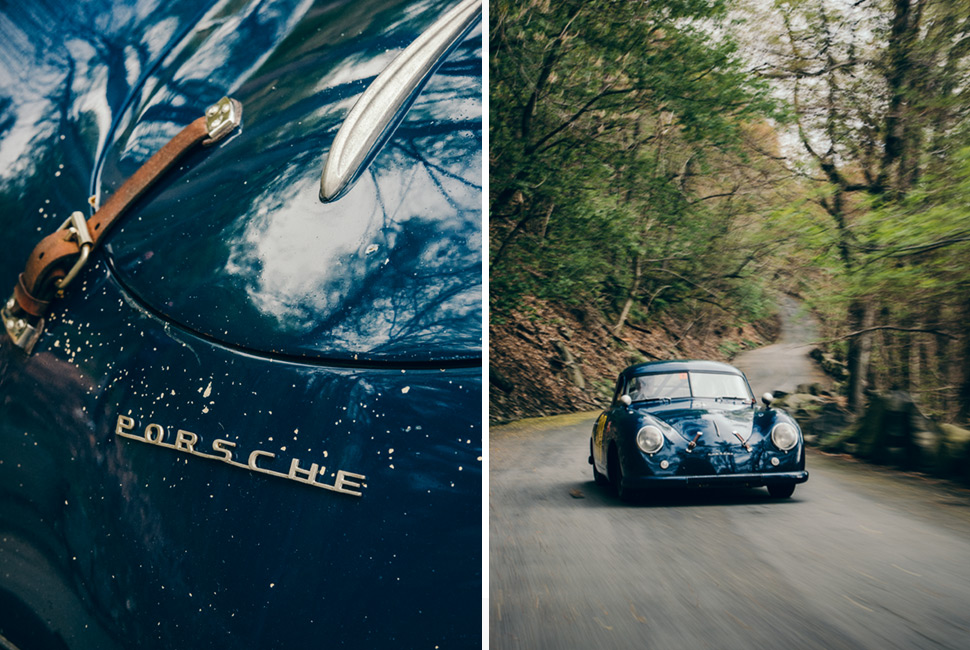 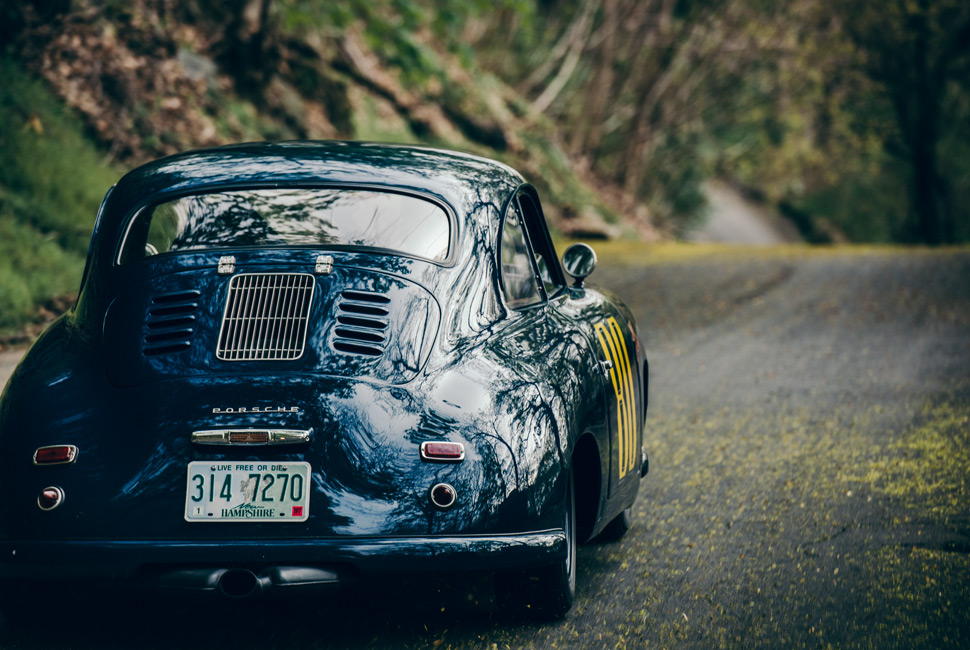 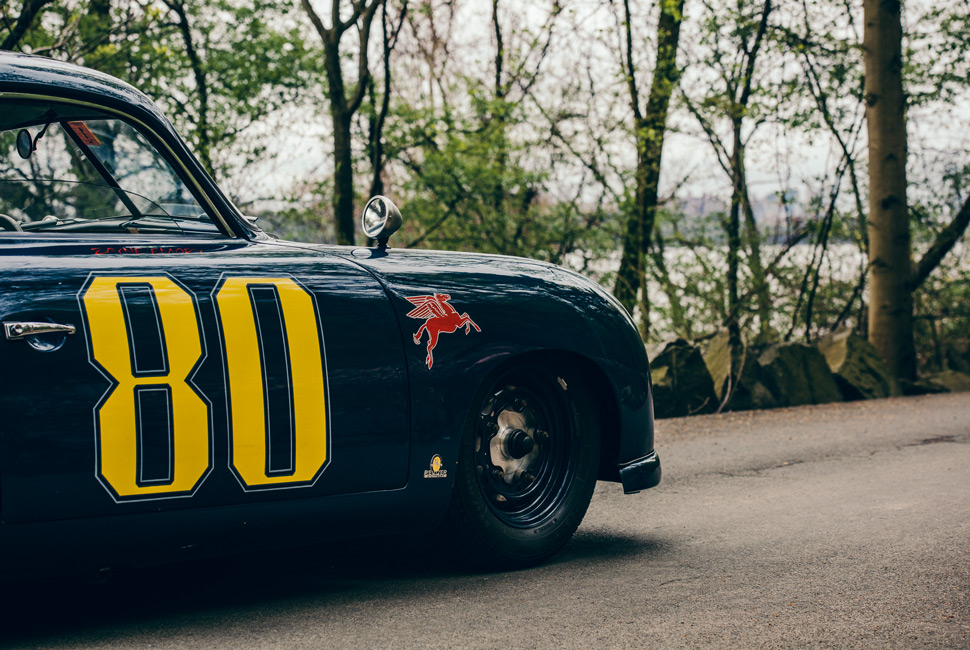 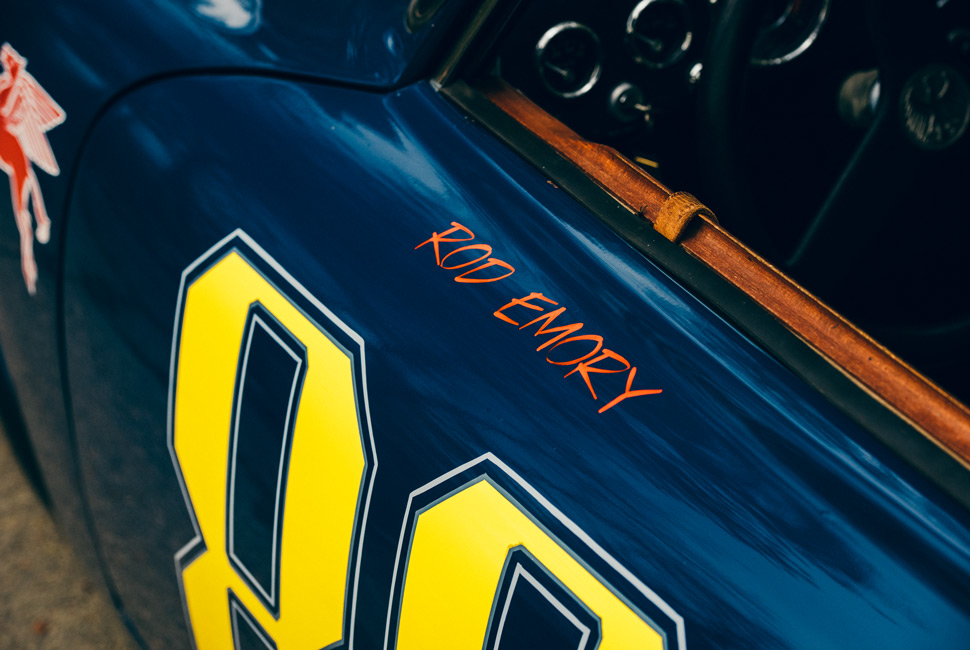 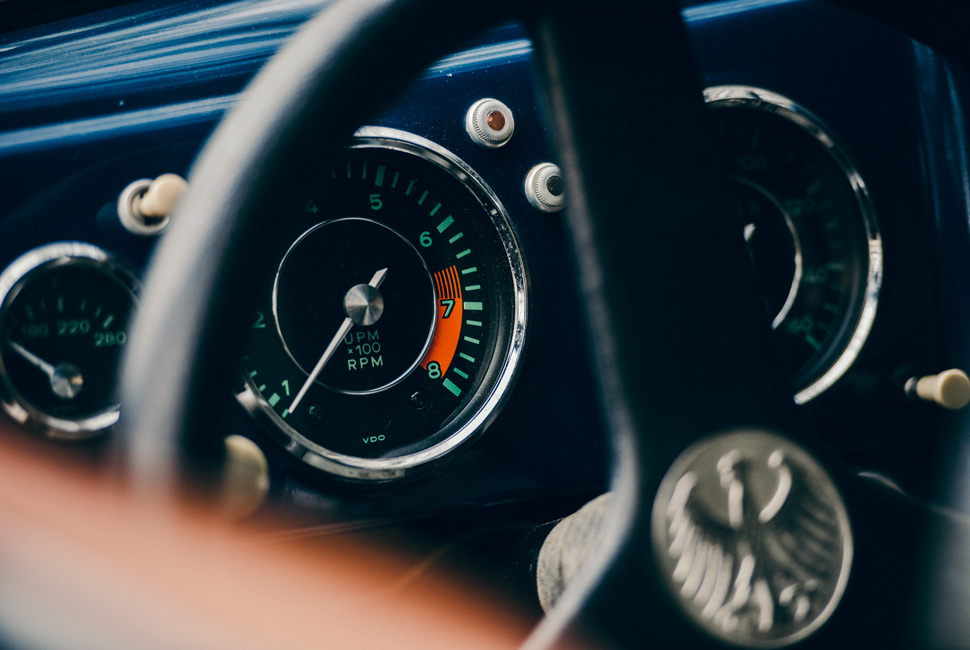 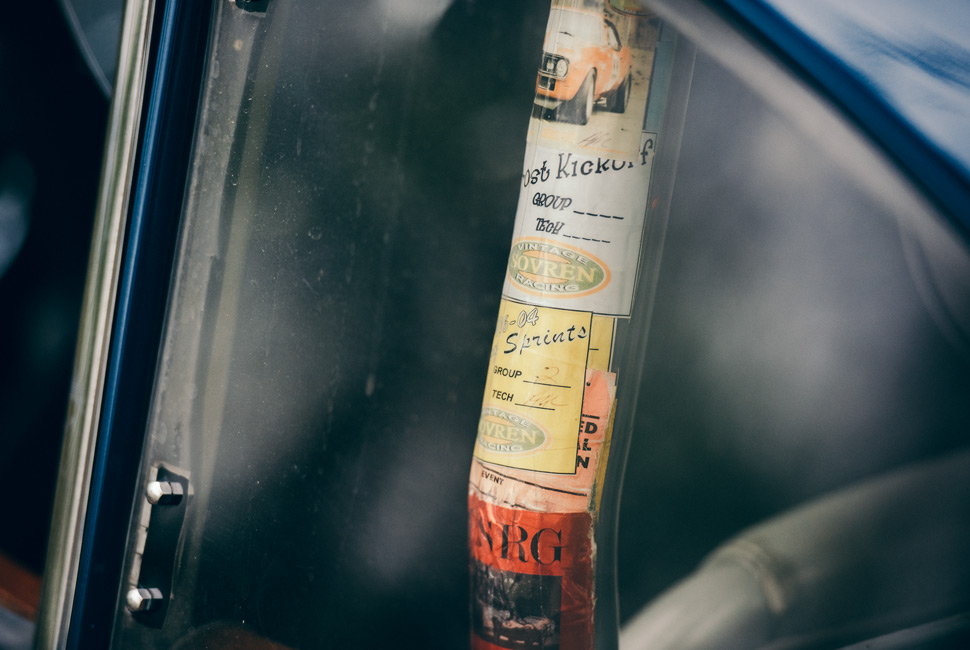 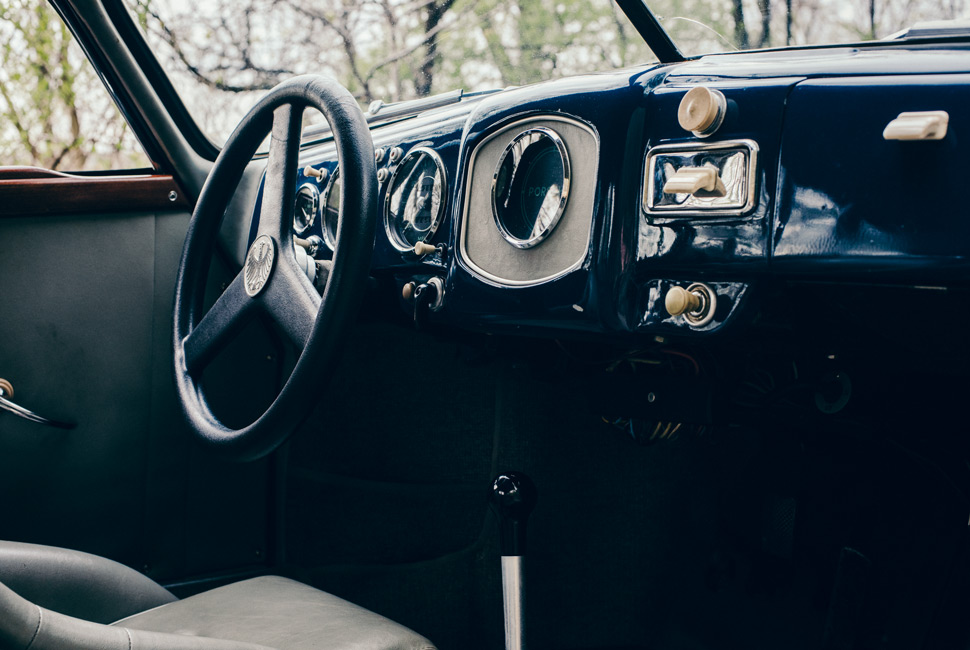 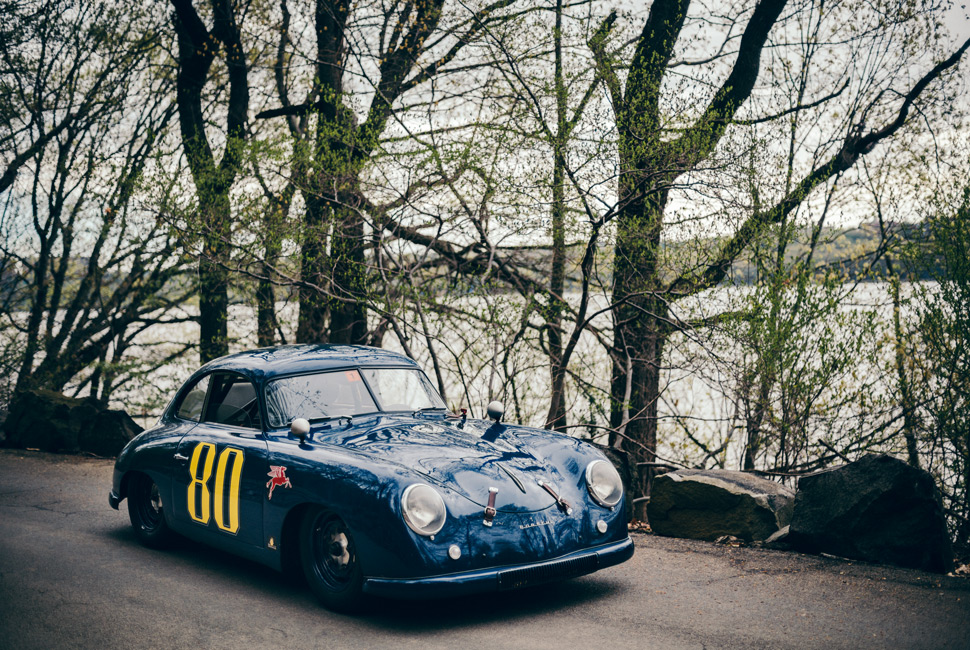 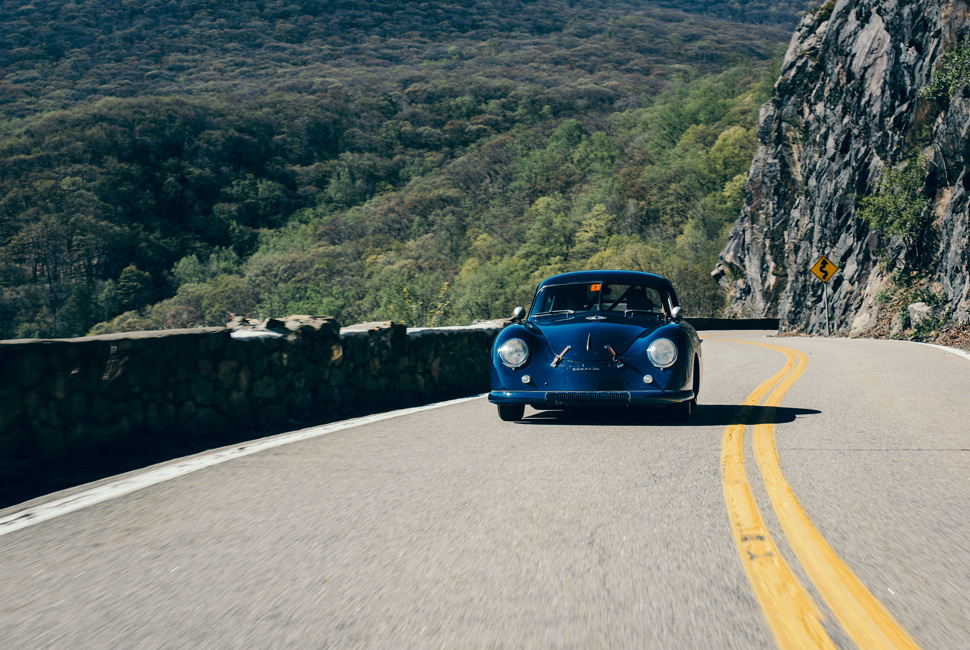 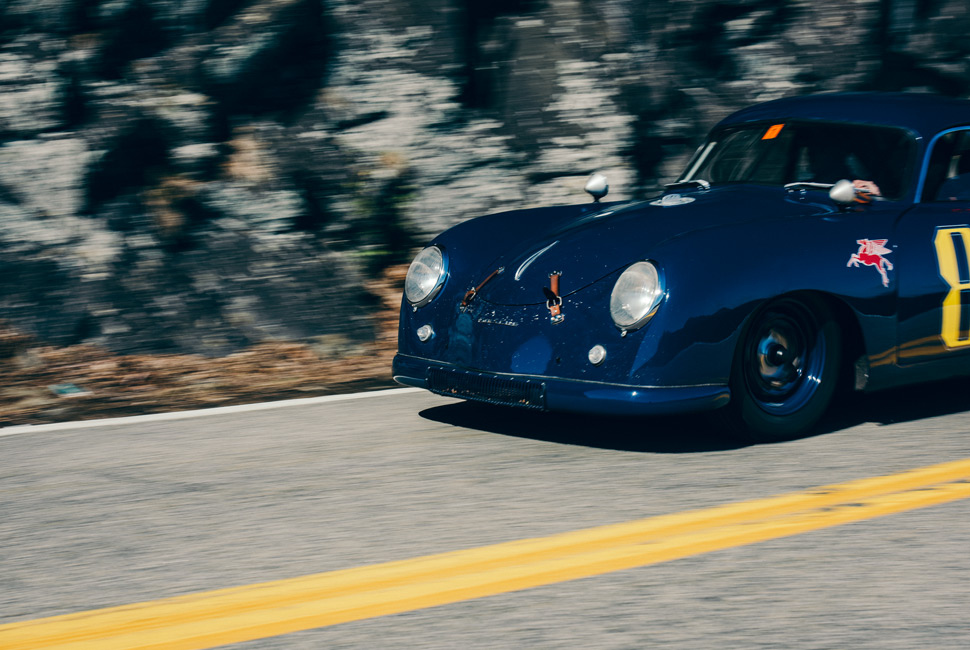 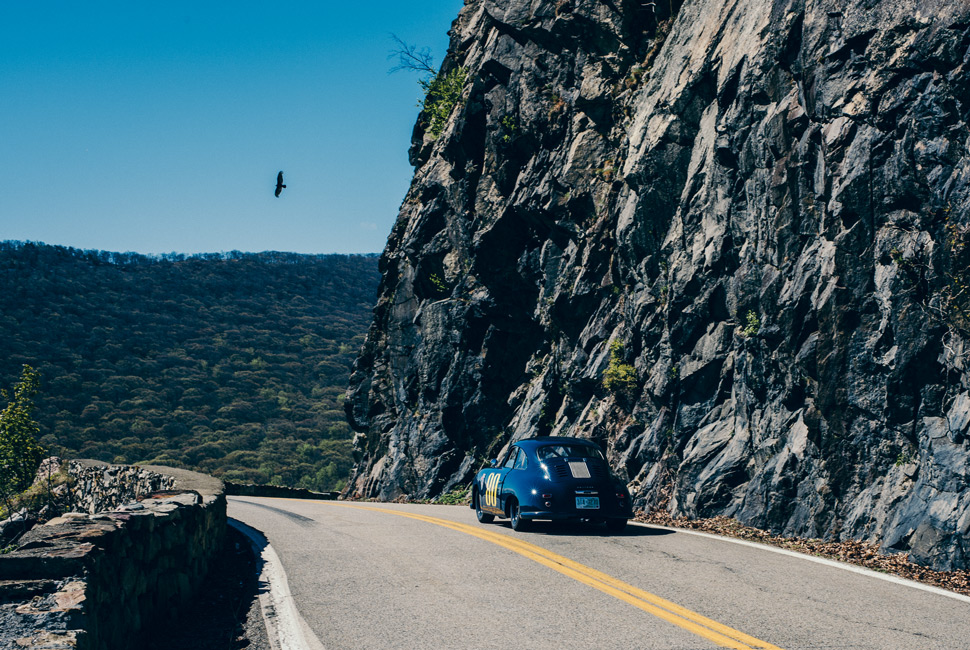 A few years back, Rod Emory auctioned off the first 356 he ever rebuilt. Quite understandably, a fan in Connecticut fell in love with Emory’s creation; the car changed hands. But when Emory found himself in the tri-state area a few weeks ago, he decided to give the buyer a call to ask if he could take the original car out for a spin. Emory told me the owner immediately obliged, saying, “it was your car to begin with, you have more of a right to it than I do.” Ever the humble car builder, Emory invited me along for a drive, wishing to share his first build and the memories that came with it. He hadn’t seen the car in six years — it’s the original Emory Outlaw 356.

Today both Emory and his car are every bit the racers they were the day they parted: the steering wheel had to be taken off and put on every time he got in and out, and though heel-toe shifting wasn’t necessary, you could tell the car liked it better. Once out of the city and up along the winding, scenic Storm King highway, Emory got to stretch its legs. He turned to me, with a slight glow and said, “This feels like home, you know?” I felt like a sixth wheel. So I let them get reacquainted and just listened to the wail of the race-prepped engine, breathing in subtle hints of fuel, brake dust, and a warm transmission — aromas I’m probably too fond of.

Emory explained how his family got into hot-rodding Porsches, starting with his grandfather, then his father, then himself as if it were a genetic tendency. And the 356 we were driving, another family member, nodded along with the story through every shift. – Bryan Campbell (Photo: Henry Phillips)