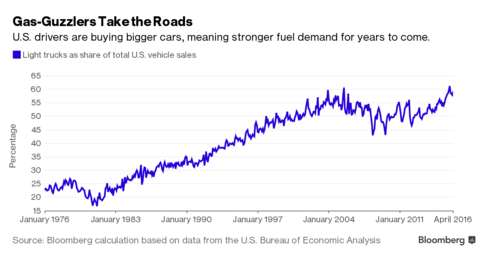 Last year, SUVs outsold any other type of passenger vehicle in Europe for the first time, according to auto industry consultants JATO Dynamics. The trend has continued in 2016, with demand for SUVs such as the Hyundai Tucson and the Renault Kadjar accounting for a quarter of sales in the biggest European countries. As OPEC ministers gather in Vienna, they may notice more sport utility vehicles on the streets of the Austrian capital than on previous visits.

Europe is a mirror of what’s happening across the world. From China to the U.S., drivers are buying bigger vehicles, while sales of fuel-efficient hybrids struggle.

For Saudi Arabia, Iran and other members of the Organization of Petroleum Exporting Countries, due to meet on Thursday, the sharp increase in sales of gas guzzlers is good news: It means stronger demand for gasoline and diesel for years to come.

“The trend of fuel-efficiency improvement of the last few years could be stopped by low oil prices,” said Christof Ruhl, head of research at the Abu Dhabi Investment Authority, the emirate’s sovereign wealth fund, and a former chief economist at BP Plc.

Take the U.S., home of the oil shale revolution and the world’s largest oil consumer. The average car sold in April achieved a fuel economy of 25.2 miles per gallon, down from a peak of 25.8 set in August 2014, just before oil prices crashed, according to data from the Transportation Research Institute at the University of Michigan. At current trends, this year will mark the first drop in average U.S. fuel economy since at least 2007, the data show.

“Fuel-economy improvement is really flatlining,” said Sam Ori, executive director of the Energy Policy Institute at the University of Chicago. “The gains completely stopped right at the same time that oil prices started to decline.”

Today in the U.S., light trucks, vans and SUVs account for 60 percent of total vehicle sales — a level only reached briefly in 2005, when Brent crude, the global oil benchmark, averaged $55 a barrel. It’s now around $50. The International Energy Agency said in May that less-efficient vehicles, including four-wheel drives, “remain very much in vogue, a consequence of persistently lower retail pump prices.”

In 2008, when oil prices averaged $100 a barrel, the share of gas guzzlers in U.S. total vehicles sales dropped at one point to just 43 percent.

Popular light trucks such as the Ford F150, the Chevrolet Silverado and the Dodge Ram achieve as little as 17 to 22 miles per gallon compared with as much as 50 to 55 miles for smaller, more efficient cars. The most popular SUVs in Europe also achieve relatively high mileage.

With larger vehicles hitting the roads and Americans driving longer distances as the economy recovers, U.S. gasoline consumption is set to rise to a record in 2016, according to the Energy Information Administration. U.S. gasoline demand will average 9.3 million barrels a day this year, surpassing the peak set in 2007, the EIA said in its most recent monthly report.

U.S. demand for motor fuel peaks between the Memorial Day holiday in late May and Labor Day in early September, when Americans traditionally take vacations. The EIA forecast U.S. drivers will enjoy the cheapest gasoline this driving season in 12 years.

“It’s so cheap that it spurs demand,” Mike Loya, a senior executive at Vitol Group BV, the world’s largest independent oil-trading house, said in an interview in April from Houston.

In China, the world’s second-biggest oil consumer, drivers are also opting for larger vehicles as never before. While cheaper gasoline and diesel helps, analysts said it’s higher incomes — and a desire to impress relatives and friends — that’s driving the purchases. According to official data, vehicles such as light trucks and SUVs accounted for almost 35 percent of total Chinese passenger sales in April, up from 10 percent in 2010 and less than 5 percent a decade ago.

“Consumers are thinking that a period of plentiful oil supply is here to stay,” said Ruhl of the Abu Dhabi Investment Authority.

Perversely, their behavior could mean that oil prices rise sooner rather than later, as fuel-thirsty vehicles help demand catch up with supply. For OPEC ministers in Vienna, the sight of four-wheel-drive vehicles on the perfectly smooth streets of the Austrian capital is good news.