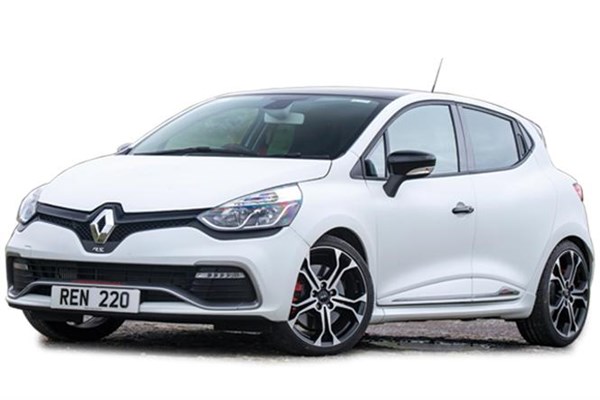 This is the re-launch of one of the most highly acclaimed contemporary hot hatchbacks. The Renault Clio Renaultsport has been totally revised for 2013 and for the first time features turbocharger technology along with a semi-automatic double-clutch gearbox.

Previously sporting a beautifully matched 2.0-litre naturally aspirated petrol engine, purists may worry that a smaller turbocharged engine won’t be as responsive as before.

On paper the numbers look good – maximum torque of 240Nm is available from just 1,750rpm, which represents a 25Nm hike over the previous model. This means it’s faster, and it completes the benchmark sprint to 62mph in 6.7 seconds, with a top speed of 143mph.

Furthermore, it’s fair to expect the previously mentioned twin-clutch semi-auto gearbox will make the Clio 200 Turbo a little more rapid. Apparently in ‘Race’ mode it’ll change gear in 150 milliseconds, which is about the same speed your eyelid can close and open – it literally changes gear in the blink of an eye.

To get the car into this full-fat performance mode requires a touch of the ‘R.S. Drive’ button. Toggling between ‘Normal’, ‘Sport’ and ‘Race’, it adjusts engine and gearbox settings along with ESP configuration, steering feel and throttle response.

The main reason for cutting engine displacement and adding a turbocharger is to retain performance while improving efficiency. In this case, Renault claims a 25% drop in emissions compared to the previous model.

There will be two chassis options available, as per tradition in Renaultsport fare. ‘Sport’ chassis combines a sporty ride with a modicum of comfort, while 5mm lower ‘Cup’ chassis is a harder, stiffer and more focused setup aimed at drivers looking for the last tenth of a second around a race track.

Renault also announced an even more focused performance version called the Clio Renaultsport 220 Trophy EDC. It gets more power, quicker gear changes and sharper handling, plus it comes with revised front sports seats. This is on sale from summer 2015.

In terms of comfort, it’s not quite as Spartan is you’d perhaps expect from a performance model. You get some extremely supportive bucket seats, a touchscreen sat nav, one of Renault’s key cards, Bluetooth handsfree, USB and aux-in connections. You can also order parking sensors, a rear parking camera and climate control.

More Clio Renaultsport models will be sold thanks to the enhanced comfort levels, but that cutting edge has been diluted and it may no longer be the benchmark in this class. It’s a good car, it’s just not a great car anymore. Read the Renault Clio Renaultsport 200 review to find out why.