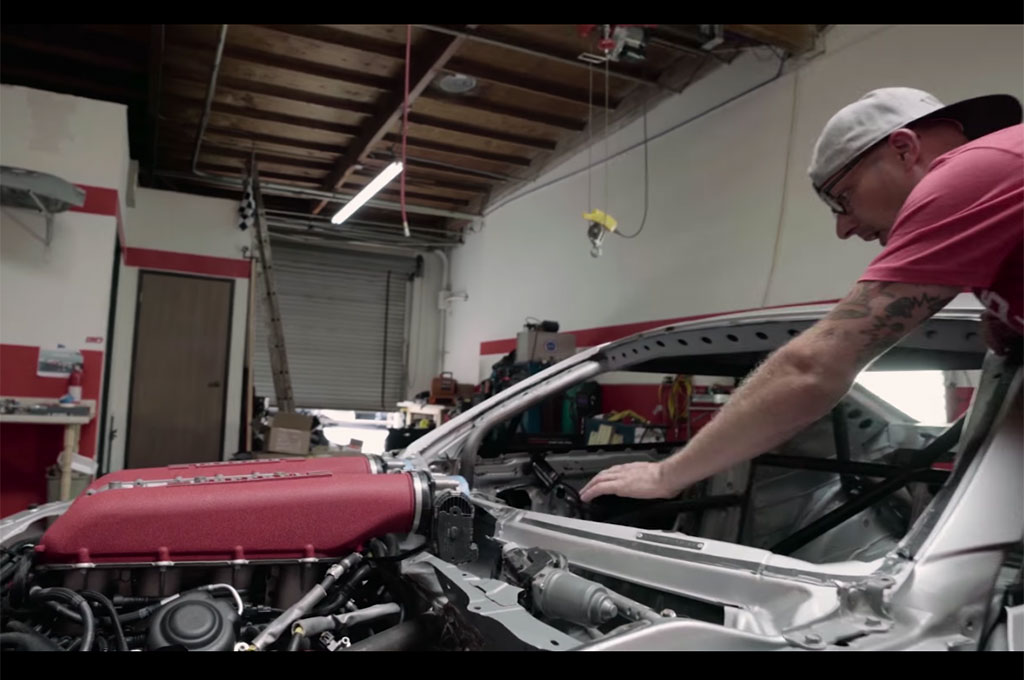 Ryan Tuerck’s insane Ferrari-engined Scion FR-S build is starting to come together, and in the latest video the Formula Drift driver goes over what has been done to the car so far and what the plans are for the future.

To recap, Tuerck is stuffing an F136 4.5-liter flat-plane-crank V-8 from a Ferrari 458 Italia into the engine bay of a Scion FR-S. In the initial teaser video, we were only shown some of the “what” and none of the “how,” but in the latest video Tuerck gets into more of the plan’s specifics. One of the biggest questions we, along with apparently most viewers, had was how the induction system would work with the intake manifold sticking out several inches above the hoodline and the throttle bodies right up against the windshield. Tuerck explains that the wipers will have to be removed, and that intake will be routed through the cabin. A custom induction box with two high-flow air filters will sit in the dash, which will connect to the throttle bodies via a carbon fiber piece running under the dash and through the firewall. The induction box will breathe cold air through ducts placed in the front fenders.

Not surprisingly, space is pretty tight in the FR-S’ engine bay with a 90-degree, dual-overhead-cam V-8 shoehorned in there. With that said, one of the biggest challenges will be fitting a set of exhaust headers that retain the Ferrari’s characteristic sound. Tuerck admits he has no idea how that’s going to happen, but says he has faith in the builders. For the remainder of the video, Tuerck talks about chassis bracing and radiator relocation.

There’s still no word on what gearbox will back the now front-mounted Ferrari engine, but we’re guessing that will be addressed in a later update. Tuerck announced that the build will be finished in October. Check out the video below to learn more about this Italo-Japanese Frankenstein’s monster.