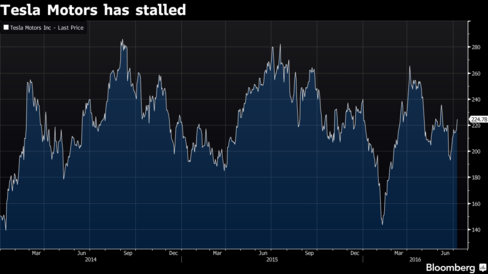 Musk generated a lot of buzz over the weekend when he teased the idea over Twitter. After his proposed acquisition of SolarCity Corp. was widely panned, Tesla Motors Inc. Chairman and CEO Elon Musk is turning to a “masterplan.”

Adam Jonas, who analyzes the electric carmaker for Morgan Stanley, sent out a note to clients this morning speculating on Musk’s blueprint. According to Jonas, the so-called master plan might entail a system that owes more to public transport than the company’s present model of vehicle ownership.

“We believe the missing piece could be an on-demand mobility service that complements Tesla’s skills in electric and autonomous vehicles,” Jonas wrote. The analyst says that just selling cars to individuals won’t remain a sustainable business model forever: “The auto industry is in the early metamorphosis from privately-owned model to a public transport utility,” he says.

Tesla would have a head-start in tapping into what could be a much larger addressable market, said Jonas, as its relatively smaller exposure to “legacy systems,” and its advantages in “machine learning,” give the firm a solid foundation from which to adapt to these shifts.

Even while there remain a host of unknowns, Jonas says he has already modeled some of this into his sums for Tesla, anticipating a 5,000 vehicle “mobility service” by 2018. “A substantial proportion of our $245 price target is based on our valuation of Tesla Mobility,” he writes.

Shares of Tesla have struggled over the past few years, hitting a high of $291 in September of 2014, but falling as low as $141 earlier this year.Replica Watches

Jonas is perhaps the most prominent analyst covering Tesla, due to his long-term and often creative predictions. While his price target for Tesla shares was once $465, he dropped it down as low as $245 last week. He has not changed that call in this note.

The analyst may be taking the time to reiterate his priors here; he’s long been promoting the idea that Tesla could be the starring player in a world with autonomous, electricity-powered public transport.

When Jonas broached the subject with Musk in November, the Tesla CEO laughed — but conceded that it was “quite a smart question, actually.”

Watch Next: Is the SEC Investigating Tesla?