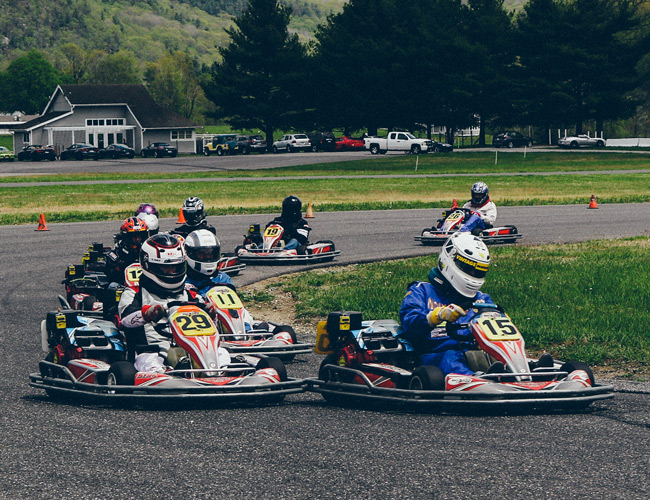 In my downtime, at work and at home, I watched helmet-cam videos on YouTube to learn Lime Rock Park’s autocross track, where I’d have my turn to trade paint for an hour and a half in a Dino Racing Kart. I practiced my “armchair commentary,” of course: “He could’ve gotten on the gas earlier there… Why the hell did you start braking there?”

Leading up to my first race I was feeling confident. I changed up my regimen at the gym to train the muscles I’d need most — lower back, chest, forearms, all light weight, high reps — all for endurance.

Clearly the guys in those videos didn’t know what they were doing. I’ve been around race tracks in fast cars and I’ve been to a number of racing schools — I felt like I already had a leg up on the less experienced drivers I’d be racing against. And because it was going to be an endurance race, I had the option of teaming up with other drivers, Best Replica Watchessharing stints and swapping in and out of the kart during the pit stops. There were teams of three or four drivers, but I chose to go at it alone. 90 minutes, straight, in a kart? How hard could it be?

The morning of the race, I showed up to the track and eyed the competition — then I started talking to them. It’s a friendly event. There’s no cash prize for winning, and everyone’s there to have a good time, as was I, but I still wanted to see how I stacked up. A couple guys had done a handful of track days, and a few raced sports cars; others had never even raced before; there was a group of older guys and younger kids who were in karting leagues and had raced this exact track a dozen times. I’d be competing in the rookie class, since this was my first race. In line for driver registration, I was asked, a few times, how many people I had on my team. My response: “Oh, I’m racing solo,” with confidence and a subtle smirk. After their retorts — “good luck with that,” or “let me know how that goes” mixed with laughter — confidence in my race craft and driving ability slowly downgraded to cautious optimism.

That’s the beauty of regional karting events like the ones Endurance Karting puts on. For most races, the bare minimum requirements are eight years of age and a height of 4 feet, 11 inches (maximum 6 feet, 11 inches, 250 pounds). No experience is required. Karts are provided and the gear — helmet, gloves, suit — can all be rented on the spot. You could show up by accident and still have an amazing day.

The karts you drive are by no means county fair bumper cars, maintained by a ratty-looking guy with fewer teeth than he has holes in his Lynyrd Skynyrd tee shirt. The Dino Racing Kart used by Endurance Karting has a single-speed, 270cc Honda engine and tops out at 50 mph. It’s a simple machine, easy enough to hop in and learn its quirks. And the slick tires and next-to-nothing weight means the karts have loads of grip, turn direction on a dime and are quick enough to dish out some high-quality, white-knuckle racing.

Trying to manhandle a racing kart around this blacktop is like trying to stop an industrial paint shaker by sitting on it.

When practice and qualifying started, it was my first time in the kart around this track at racing speed. I had 20 minutes to set my best time, but 10 minutes in I was already back in the pits, hands swollen from gripping the steering wheel for dear life and leg cramped from trying to push the gas pedal through the front of the kart. There’s no suspension to speak of and Lime Rock’s autocross track is in dire need of repaving, so trying to manhandle a racing kart around this blacktop is like trying to stop an industrial paint shaker by sitting on it.

I pulled off to the side and started stretching my hands and legs. The pit official trots over — an older, wiry guy with a wrinkled face, who you can tell has worked a lot of theses races and seen all types of drivers. “You a’ight?” he asked through a smile. “Yea, I’m just taking a break.” I can see his eyes go wide behind his sunglasses the same moment he belts out a laugh. “You got 90 more minutes of this,” he replies, still laughing while walking away. My six-foot-one frame couldn’t sink any lower into the seat — believe me, I tried. I headed back out to try and improve my qualifying time, and maybe find some semblance of pride on one of the apexes. I did well enough to start 14th out of 18, with a fastest lap one and a half seconds off pole position. Reality started to settle in as deeply as the lactic acid in my hands. 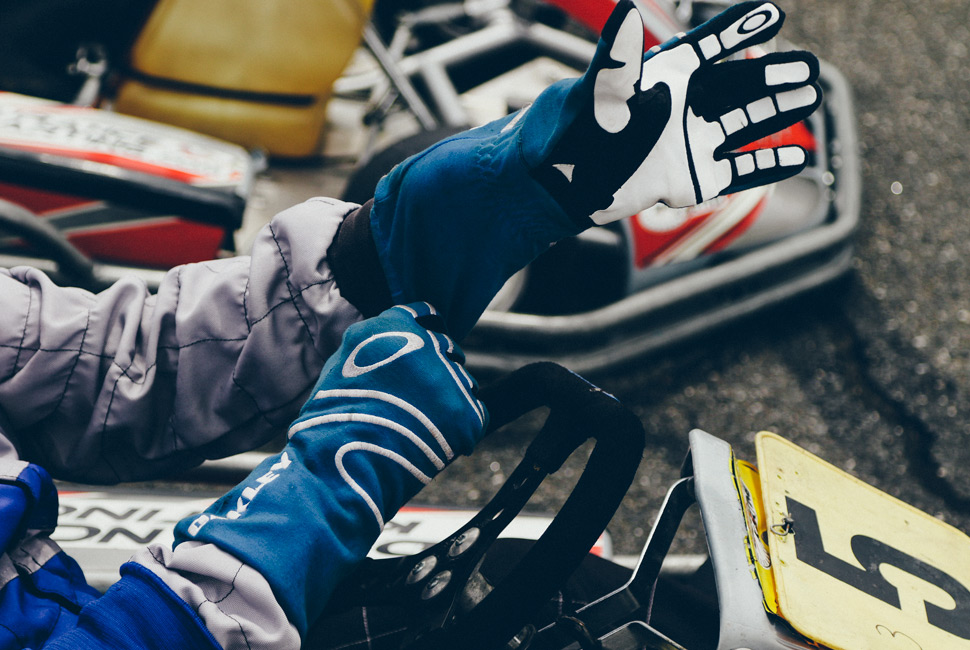 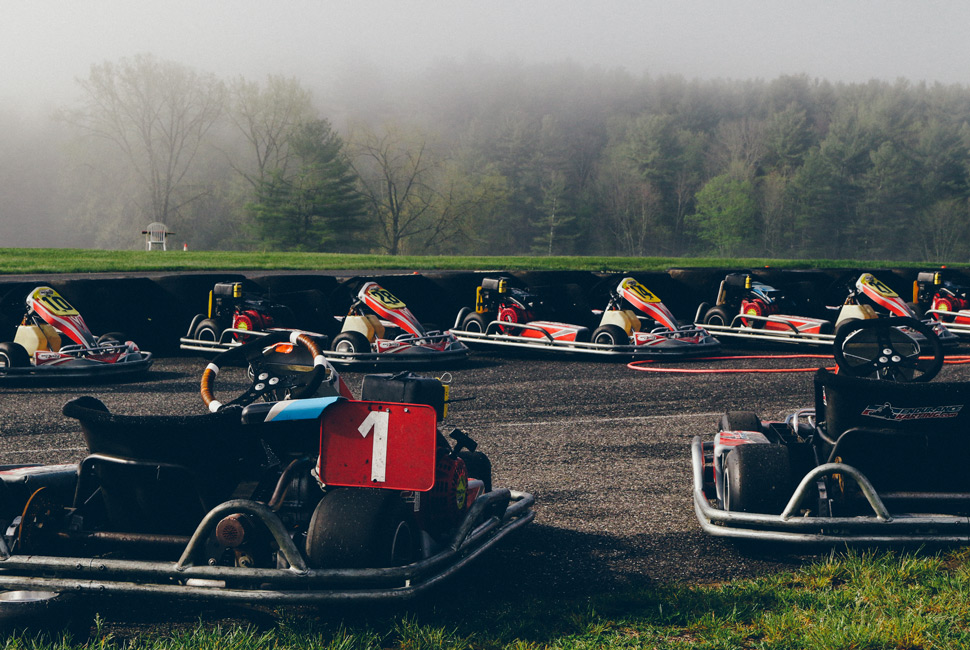 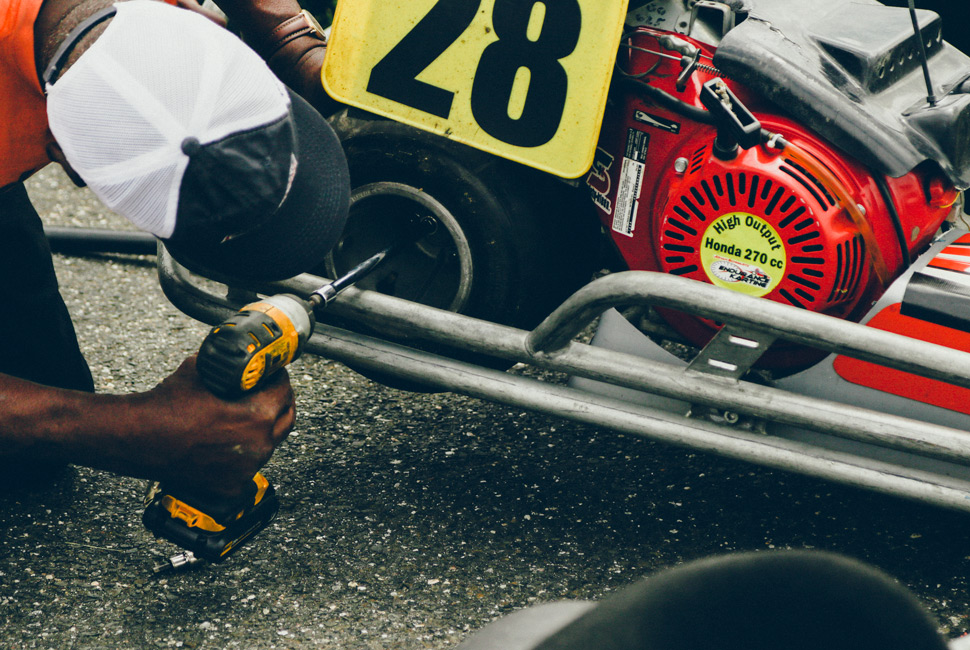 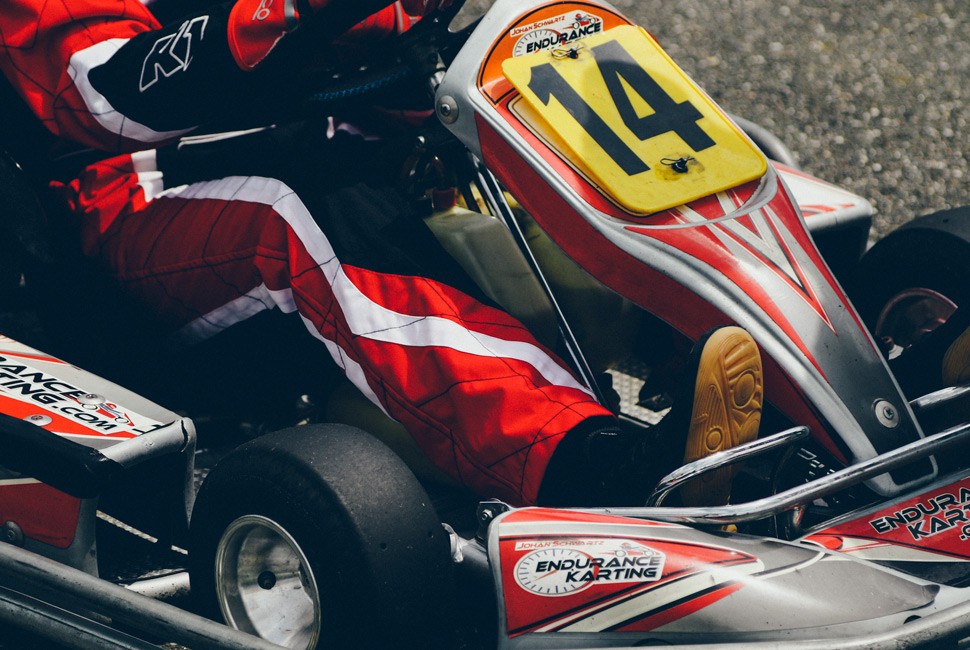 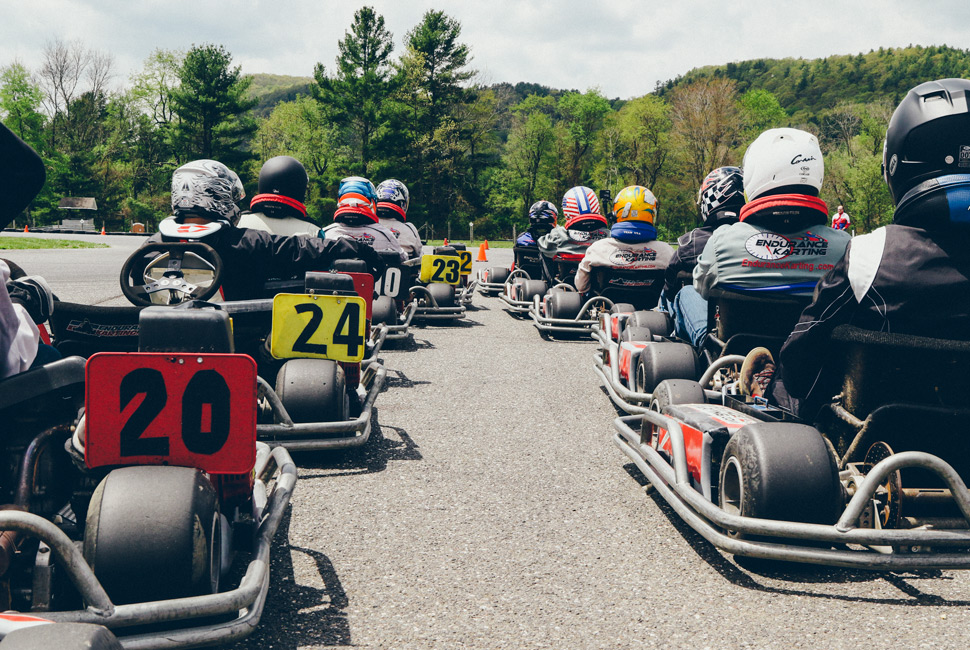 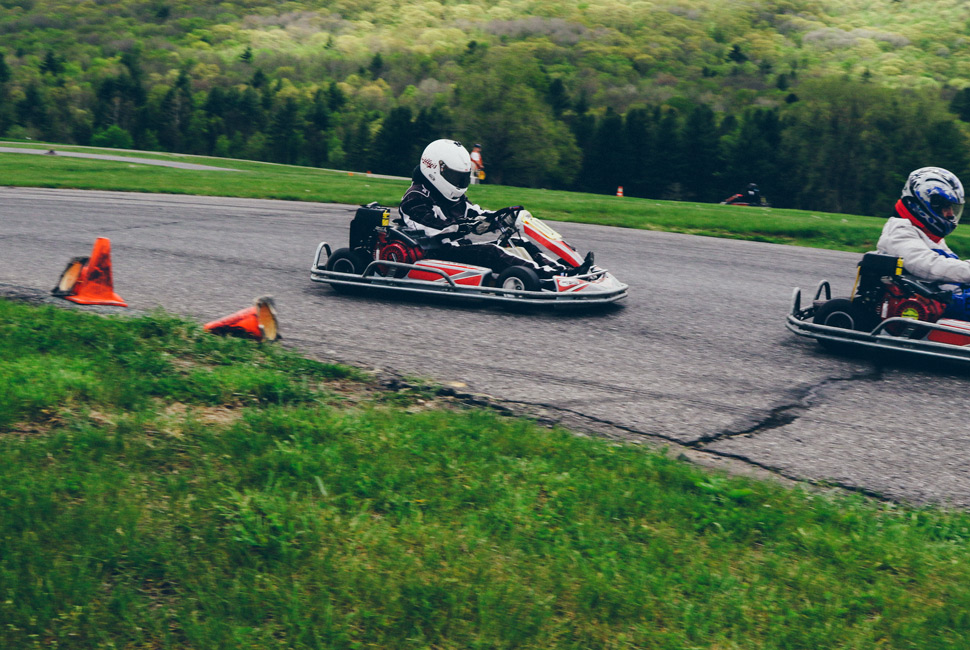 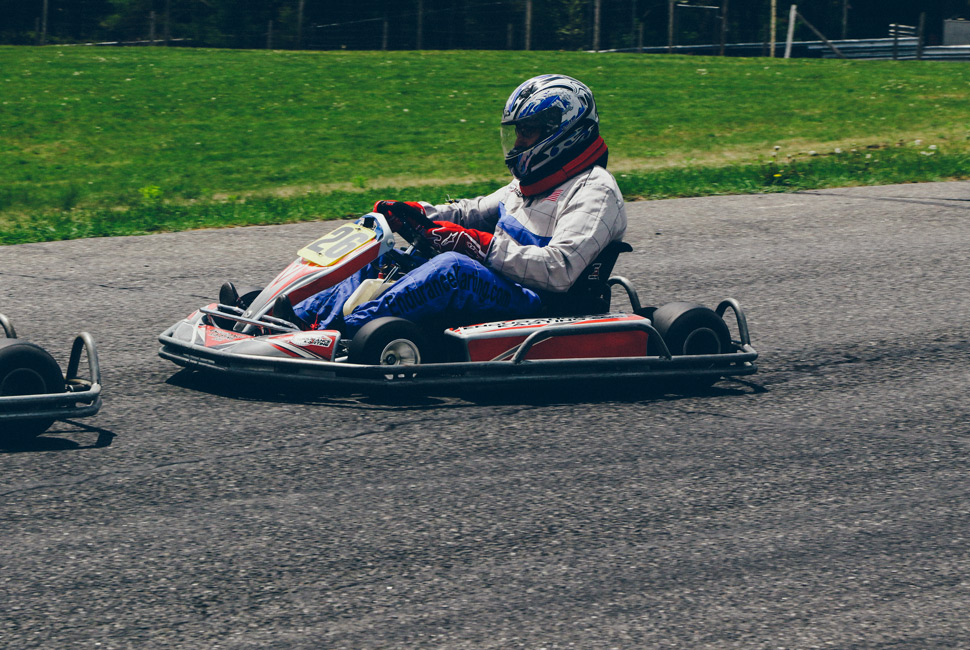 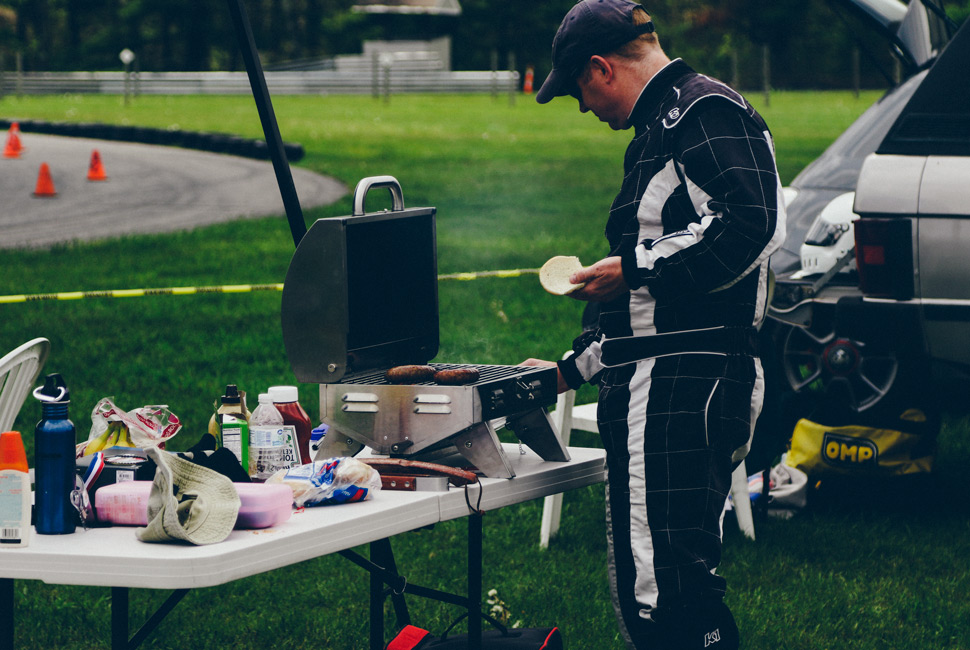 There’s a short lull between qualifying and the race, during which I overheard all the teams talking pit strategies. Some were hooking up in-helmet two-way communication headsets, others organized pit boards to communicate to the driver out on track. I had none of that. No matter how many people are on your team, there are a mandatory five pit stops that need to be made, and without a lap counter or timer I was going to have no clue where I was in the race. I worked my way into the conversation between a couple of other drivers talking about the faster racing lines and shared a few tidbits about where I was carrying decent speed through a couple corners, but for the most part my ears were open and they were preaching gospel as far as I was concerned. Everyone was more than happy to share tips and tricks. I was willing to try anything to get my lap time down.

I pulled up to my slot on the grid and lined up for the start. My adrenaline started its steady flow, which helped cure the soreness in my muscles, but now my hands were shaking as though I’d tied on a few too many the night before. When the flag dropped I went wide to take a better line up the hill in turn 1, but number 14 immediate overtook me on the inside. I cut back up the inside going into turn three, gained the position back and started reeling in the train of karts in front of me. Lap two: I was closing that gap around the sweeping turn three and towards the downhill turn four — carrying way too much speed. Idiot. I slid wide and spun in the dirt; a couple four-letter words later I mounted my comeback. I caught back up to Number 14 and passed him on the outside on a fast uphill line. Eat your heart out, Lewis Hamilton.

I caught back up to Number 14 and passed him on the outside on a fast uphill line. Eat your heart out, Lewis Hamilton.

With no concept of how far into the race I was, I arbitrarily decided to make my first pit stop when I saw a few others go in — it seemed like a good idea. During my second pit stop I asked the pit worker how much time was left. “You got about 20 minutes ’til the checkered,” he replied. I now had to make my three remaining pit stops before the race ended or I’d be disqualified.

After managing to squeeze in my remaining pit stops, I got back in a groove. Then the checked flag came down and cut my groove short. I had no idea what place I finished in or how I even fared against the other rookies. After parading into the pits for the last time, I came to a complete stop and realized I couldn’t get out of the kart. Not because I just had the best experience I’ve ever had on four wheels and didn’t want it to stop (which was true), but because I had been cramped in the fetal position for the past hour and a half and physically could not get up.

After gathering myself, I rolled out of the kart and made it over to the award ceremony. I had gained two positions during the race and earned third in the rookie class. I received a medal, a few congratulations from the other drivers, and a look of astonishment and a handshake from the pit official. The confident smirk returned. The next race started in 20 minutes — how hard could it be?