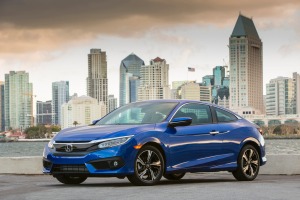 The award applies to the Civic Coupe equipped with an optional front-crash prevention system.

In track tests at 12 mph and 25 mph, the two-door Civic equipped with the optional technology avoided collisions, the Institute said in a statement on Tuesday. The Civic Coupe received “good” scores in all other Institute crash tests.

The 2016 Honda Civic sedan also won a Top Safety Pick+ award. Both cars are on sale now at Honda dealerships.

The National Highway Traffic Safety Administration has not rated the 2016 Civic Coupe.

Key competitors to the Civic Coupe include the Ford Mustang and Kia Forte Koup.

Edmunds says: The Insurance Institute for Highway Safety has not rated the 2016 Kia Forte Koup. The 2016 Mustang was not an award winner.