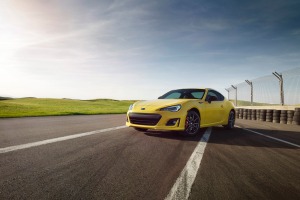 A Subaru spokesperson told Edmunds that pricing will be announced within the next few weeks and that a more specific 2017 on-sale date is not yet available.

Competitors to the BRZ, Subaru’s performance coupe, include the Chevrolet Camaro, Ford Mustang, Hyundai Genesis Coupe, Nissan 370Z and the Volkswagen Golf GTI. Another key rival is the 2017 Toyota 86, the rebadged version of the outgoing Scion FR-S, a sibling to the BRZ.

The exclusive model — available in any color, as long as it’s yellow — was unveiled Sunday at the Wicked Big Meet, an annual Subaru enthusiast festival in Stafford Springs, Connecticut.

In addition to the striking exterior paint, the new model features a host of upgrades in a Performance package that’s optional on the standard 2017 BRZ.

These include Brembo brakes with four-piston calipers on the front and dual-piston calipers at the rear, Sachs Performance shock absorbers all around and special 17-inch black aluminum alloy wheels.

The standard power plant is Subaru’s updated 2.0-liter four-cylinder boxer engine that produces 205 horsepower and 156 pound-feet of torque, which comes mated to a six-speed manual transmission.

Inside, the 2017 BRZ Series.Yellow features black leather and Alcantara upholstery with yellow stitching on the seats, door and dash panels, steering wheel, knee pads and shifter boot, as well as unique BRZ logos on the seatbacks and floor mats.

Edmunds says: Despite the unusual punctuation in its name, the 2017 Subaru BRZ Series.Yellow should catch the eye of performance-minded Subaru shoppers. Period.