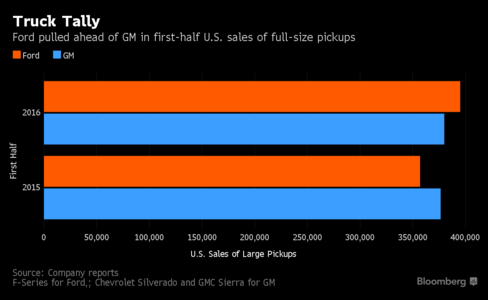 After U.S. Sales Mixed, Auto Industry on Watch for Headwinds

A mixed bag of U.S. sales reports from the world’s biggest automakers failed to alleviate concerns that the market is slowing and that growing economic uncertainty will keep consumers from spending.

The results underscore the question of whether industry growth has peaked. The year was already at a critical pivot point as prospects dim for a repeat of 2015, when modest growth in the first half gave way to an ebullient final six months starting in July. One reason for the nervousness now: U.S. employers added the fewest jobs in almost six years in May.

“We could be looking at the first decline in auto sales since the recession,” said Jeff Schuster, an analyst with research firm LMC Automotive, “If we don’t see that bump up in July, that’s going to start us down that path of fairly regular misses on a monthly basis.”

Nissan sales jumped 13 percent to a June record, while Ford’s 6.4 percent light-vehicle increase and FCA’s 6.5 percent growth were led by pickups and sport utility vehicles. Analysts projected gains for all of the six largest automakers except GM.

Ford said it’s closely monitoring fallout from the U.K.’s vote last week to leave the European Union — the so-called Brexit — but said it didn’t see any impact on U.S. sales at the end of June.

Brexit “obviously dominated the news coverage and then triggered a sell-off,” Mark La Neve, Ford’s vice president of U.S. marketing, sales and service, said Friday on a conference call with analysts and reporters. “In the face of that, the consumer hung in and were buying cars over that last week of the month because we closed really strong.”

Yet even as U.S. industrywide sales through June outpaced 2015, analysts surveyed by Bloomberg were taking a less optimistic view for this year. Their average outlook for the full year slid to below 17.7 million cars and light trucks, from an estimate of 17.8 million in January. In the final six months of 2015, the annual sales rate often exceeded 18 million.

GM’s June decline included a 3.7 percent drop for the Chevy Silverado large pickup. Two of its big SUVs, the Chevy Suburban and the Cadillac Escalade, had gains of 33 percent and 17 percent, respectively.

Toyota’s results were dragged down by a 13 percent decline in sales of its Camry family sedan and a 27 percent plunge in deliveries of its Prius hybrid. Sales of its RAV4 small sport utility vehicle rose 10 percent.

Strong truck sales drove Ford’s light-vehicle deliveries, which beat estimates of a 4.9 percent gain. The automaker also said its sales in the first half of the year were the best in a decade.

F-Series pickup sales surged 29 percent in June to 70,937 units. Sales of Transit commercial vans rose 19 percent, while those of Escape SUV rose 20 percent. Ford’s sedans continued to struggle, led by a 49 percent drop in sales of the subcompact Fiesta and a 44 percent decline in Taurus deliveries.

La Neve said there was no apparent impact on F-150 sales from Chevrolet’s attack ads that showed longtime market leader Ford’s aluminum truck tearing when heavy objects were dropped in its bed.

“They tried this, and the numbers speak for themselves,” La Neve said

The reduced full-year estimate came after the May U.S. jobs report and as the British vote last week spooked financial markets. June’s pace was not only slower than May’s 17.5 million, it even came in below last June’s 17 million pace.

“There certainly is a higher probability of having a slightly down year than there was a month ago,” Schuster said. “It’s no longer just a leveling off — it’s a potential contraction in the second half of the year.”