You are here: Home  /  British Car  /  Cars Brands  /  Land Rover  /  Crossing the Sahara with Only a Map and a Compass
British Car 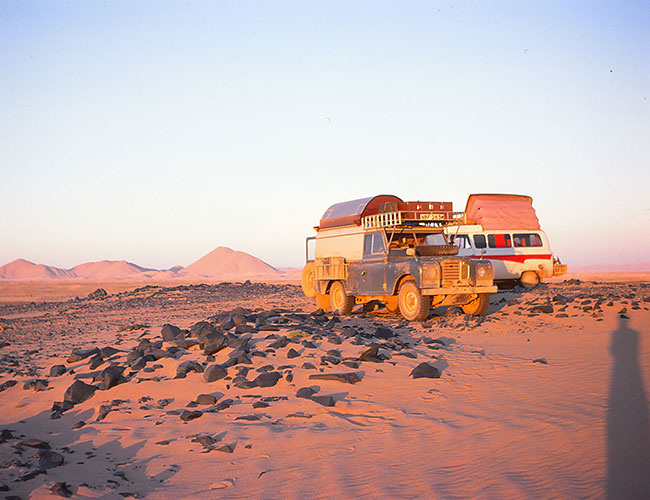 Crossing the Sahara with Only a Map and a Compass

Yet the husband-and-wife team of Alec and Jan Forman did just that in 1977, traversing 40,000 miles over the span of 29 countries at the wheel of their trusty Land Rover Series III. An overland journey, even with today’s modern cars and convenient GPS, is an exciting, yet daunting undertaking on its own. The prospect of venturing into the unknown with only a compass and paper maps is even more so.

What the Formans found was not just an epic off-roading adventure, but a new perspective on the world, encountering new landscapes, foreign cultures and kind strangers along the way — the kind of life-changing experience we all dream about. Fortunately for us dreamers, the Formans recounted the story of the trip in their book Strangers Like Angels: With a Devil or Two to Boot, and shared with us the tail of them crossing the Sahara Desert using just a compass and a map. — Andrew Connor

By Alec and Jan Forman

We eventually arrived in the desert town of Agadez after three grueling days of driving over 600 miles from Niamey with the daily temperature rising.

The road conditions were variable, from good, well-graded dirt roads, to deeply rutted sand tracks — in which, at one point, the Land Rover became trapped until a passing local truck stopped and a dozen men jumped off and pushed us free. Other dirt roads were seriously corrugated and the jolting Land Rover threw us up from our seats as the safety belts jarred into our bodies, trying to hold us still. Alec fought to control the jerking steering wheel, pulling this way and that, as the wheels skimmed the hard ridges. If you maintained a speed of forty miles per hour, you’d have a relatively smooth ride until you crossed an irrigation gully cut across the track. Hitting a gully at speed sent the vehicle into the air and it landed with such force that the heavy Land Rover rammed rigid into the ground. It threw us towards the windscreen and then we would thump back down hard onto our seats.

Clouds of red dust enveloped us from the increase of passing traffic, so by the time we arrived at the Agadez campsite we looked like clowns with reddened hair and faces, had camel thirst and were ready for a cold beer. The pleasant campsite was situated seven miles out of town and boasted clean squat toilets and rigged-up, perforated bucket showers. It had a simple restaurant in secluded gardens with shady trees and a swimming pool full of fluorescent green water.

Busy days at the campsite, as we prepared for the second crossing of the Sahara. The advisory put out by the Automobile Association read that it was extremely unwise to travel in the desert between May and October, due to the heat and difficulties arising in the event of a breakdown. From June onwards, the southern Sahara was subject to violent rains and the roads could become impassable. Well, we had made our decision and were committed to make the crossing at that time.

On Sunday, 5th of June, we left the campsite at half past five. Our thermometer read 89 degrees Fahrenheit. Taking on my role of desert navigator again, I had the compass, diary and pen on hand to record time, mileage and notable features, as we set out to drive the 1,000 miles north across the Sahara. Traveling unaccompanied, we knew this would be a risky drive, pushing ourselves to the limit each day. We registered our intended route at the Agadez police station and were soon out of town. 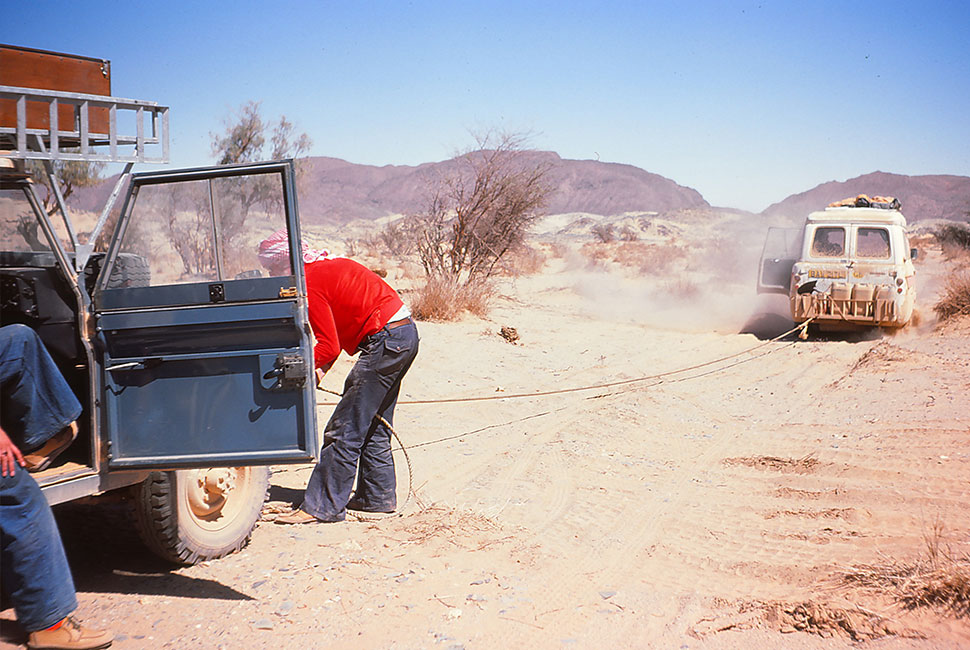 Initially Alec drove the Land Rover across the parched flood land that supported a few scattered trees. In leaving early we hoped to take advantage of the sand being firm from the coolness of the night. After driving twenty-nine miles in the first hour, we arrived at Teguidam-Adra, a village of twenty huts. A small flock of goats gathered by a well to drink the water drawn by their shepherd boy. He waved to us as we passed by.

Although it was a hot day, the air was pleasant on our faces as it breezed through the open windows. Dust kicked up into the back of the Land Rover, owing to the poorly sealed door following the ditch incident. As we drove across the flat gravel and sand plateau I saw an unusual small plot of fenced farmland that I noted down in the diary, along with the compass bearing as a reference point en route.

Traveling unaccompanied, we knew this would be a risky drive, pushing ourselves to the limit each day. We registered our intended route at the Agadez police station and were soon out of town.

We took a break after seventy-seven miles at the small mud desert town of Teguidda-n-Tessoum. There were many fine-looking Tuaregs who rode proudly on their camels through the streets. They sat on decorative leather-covered, wood-framed saddles that fit snugly over the camel’s hump. Naked children with Mohican haircuts came and asked us for pens.

We topped up our water supply, including filling the new goatskin I had purchased the day before in Agadez market. It had been thoroughly treated and prepared to carry water, unlike our first purchase. The headless, swollen, hairy skin with trussed-up legs was stretched out on the side of our Land Rover, tied with coarse rope to both ends of the jerry can rack.

We continued on for twenty miles across a wide expanse of undulating sandy plains as far as the eye could see. The ground was sparsely covered with pale yellow grass and scattered thorn trees that offered little shade. The temperature had reached 100 degrees and the sun glared relentlessly.

A totally remote location, yet we came across a tent which was the home for an isolated Bedouin family: a mother, two children and a disabled father with a clubfoot. Two camels and a couple of goats grazed nearby. The sound of our approaching Land Rover grabbed their attention and they hailed us to stop. The mother held a two-quart tin by its handle high in the air. They needed water, so we stopped and shared our limited supply.

Want to Import a British Classic?

Update Your Car with a $30 Heads-Up Display Now