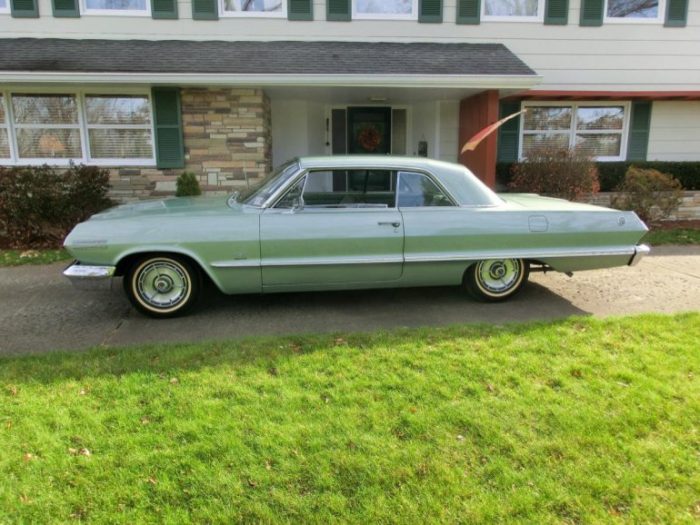 Turbo-Thrift inline-six to the legendary 409, which made as much as 425 horsepower. Most cars split the difference between these two extremes, and this 1963 Chevrolet Impala SS two-door sport coupe, for sale on Hemmings.com, is a perfect example. As ordered, it came with the 283 V-8 (good for 195 horsepower), mated to the two-speed Powerglide automatic, a sensible combination for a family-friendly daily driver. Said to be mostly original, the car was recently refurbished mechanically and cleaned up cosmetically. It isn’t perfect, and the seller is clear that the carburetor probably needs disassembly and cleaning, and the bodywork has a few scratches, dents and spots of rust after 53 years. Chevrolet’s Super Sport models are often viewed as high-performance, but in 1963 the SS package was more show than go, adding things like emblems, bucket seats, a center console and unique wheel covers. Impala SS models could be ordered with engines ranging from the 230-cu.in.  Flaws aside, this Impala looks to be a clean weekend driver that wouldn’t take much effort to make mechanically reliable. From the seller’s description:

1963 Impala SS survivor, 283 with Powerglide automatic. This was a garage find from a widow who needed money for house repairs. Her husband died more than 35 years ago, and her only son died 8 years ago. The car has been sitting since then. It appears the son was attempting to make it roadworthy again, as it has new bias-ply tires and it had some brake work done to it.

I replaced the brake lines, wheel cylinders, shoes, master cylinder, radiator and heater hoses, new water pump, I re-cored the radiator and flushed the block and heater core, new fuel pump, rubber lines, along with a new fuel tank and sending unit. New spark plugs, air cleaner, oil and filter, new transmission fluid. It runs well, starts very quickly and does not smoke. I did not rebuild the carburetor and it is cold blooded due to varnish (I suspect) but otherwise, it accelerates and idles well.

The car is complete. The chrome is in very good shape and all of the trim is there. The carpet was replaced by the son, and at some point way back, the husband installed seat belts. (it was the family car until the husband died) There is some vinyl shrinkage on the passenger side of the dash and a small tear on the back of the passenger front seat. The seat coverings are original. They are clean, but not “new.”

There is some rust, but it is only on the passenger side of the car. Someone (I’m guessing the son) did some patching, but it does not appear to have any road weathering. The body does have some minor dents and dings, as well as scratches on the trunk lid, as it was used as a shelf for at least the last 8 years it sat in the garage. I tried minor buffing, but I did not want to try sanding and buffing, for fear of ruining the finish altogether. It shined up well, as did the chrome.