You are here: Home  /  Auto Tech  /  At The Race of Gentlemen, an original Oiler dons the colors once again
Auto Tech 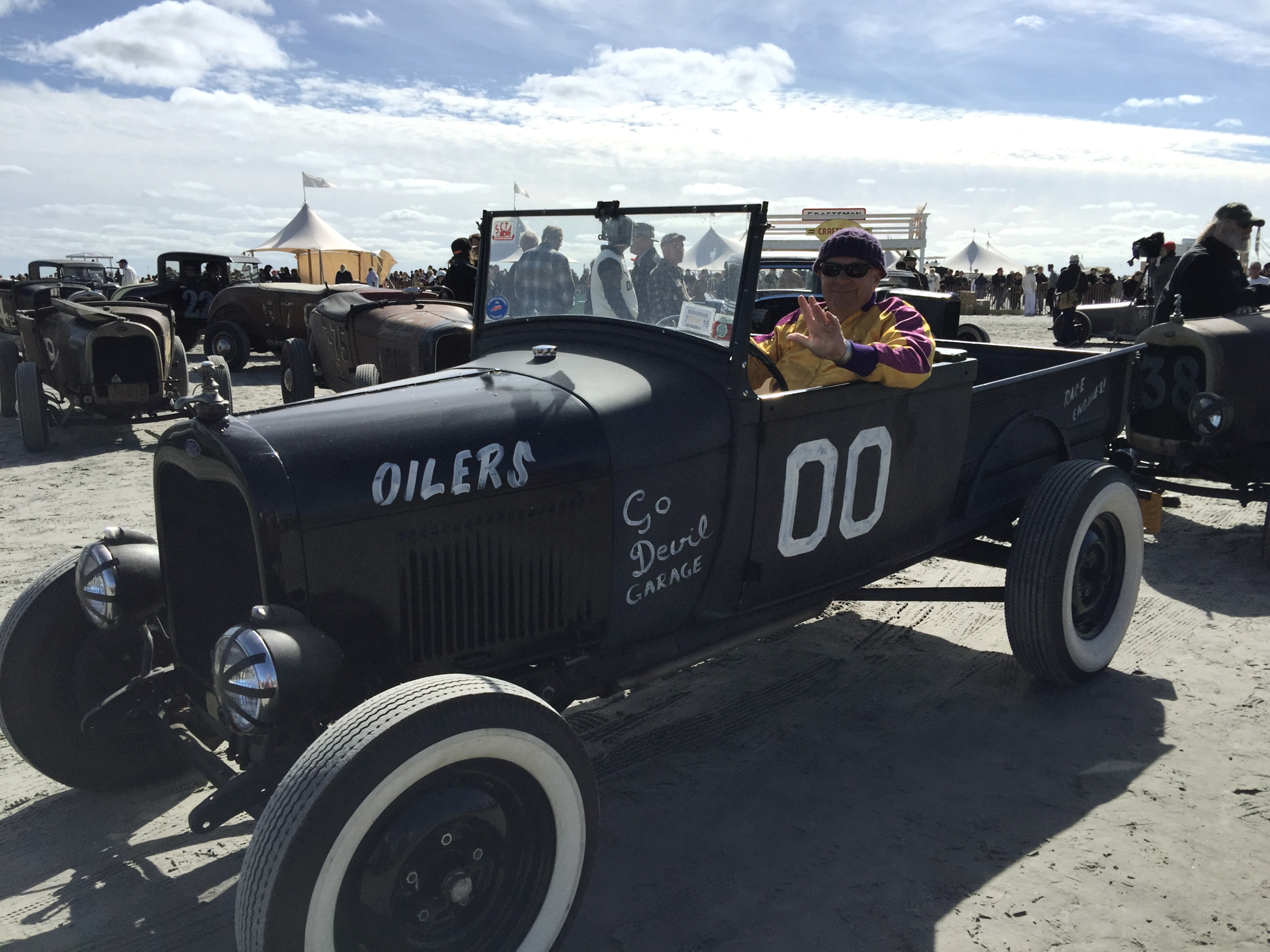 We are picking our way through the old hot iron as it grumbles in the staging lanes, and our eyes are drawn to the flash of a gold-and-purple satin jacket on a venerable hot rodder sitting behind the wheel of Al Clarke’s A/V-8 roadster pickup.

For the first time in 55 years, Oiler Quint Meland is staged to race. Photography by the author.

As the weather warms, the days lengthen and the annual Race of Gentlemen in Wildwood, New Jersey—now happening on June 4-5—fast approaches, we can’t help but return to memories of last year’s event. One recollection, in particular, stands out…

For those of you lucky enough to have been running around in Southern California just after World War II, you would immediately recognize these colors. The rest of us probably learned about them, and the car club that wore them, from the photographs taken by founding club member Don Cox in Robert Genat’s book The Birth of Hot Rodding.

Gold and purple are of course the colors of the famed Oilers of Carlsbad, a group formed in 1947 mostly of recently returned World War II servicemen inspired by the racing they saw on the dry lakes. It is the second, officially sanctioned, incarnation of the Oilers that puts on the wildly popular Race of Gentlemen on the beaches of Wildwood, New Jersey, and now Pismo, California.

According to Genet’s book, in the beginning, there were 20 members and 16 roadsters in the Oilers car club, but those numbers quickly grew and eventually, by the late Fifties, included 50 members, among them the fellow with the mile-wide grin seated before us in the RPU: 75-year-old Quint Meland. Recognizing the original club colors, we walked over to have the honor of talking with Quint…

Quint Meland: I have not had this jacket and my helmet on in 55 years, so I was invited to come back as one of the old. I was one of the original Oilers. I joined the Oilers of Carlsbad in 1957 or 58—it’s been so long, I can’t remember. I raced with the Dragmaster Team down there—Jim Nelson, Doug Martin/Barton and the Oilers—until 1960, and that was the last time I’ve been down a drag strip, and so this invitation to come here is phenomenal. I just love it. People are so wonderful. 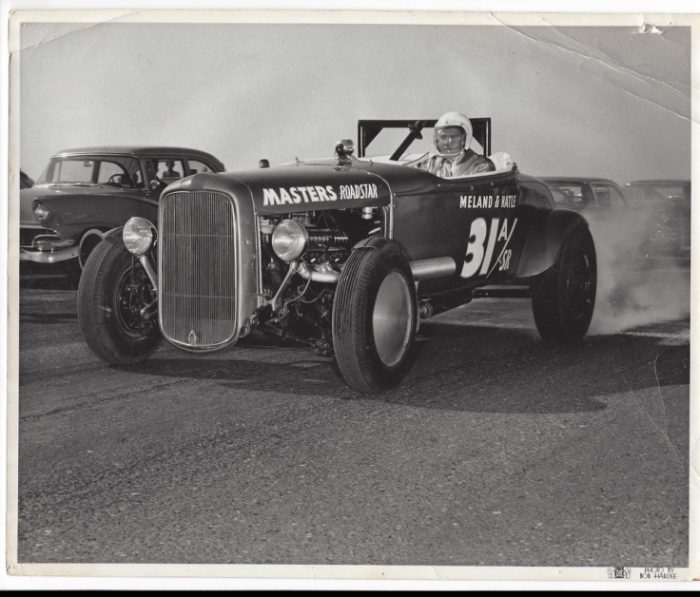 Quint Meland at the wheel of the Oiler-owned Dragmaster team car. Photograph courtesy of Quint Meland.

Daniel Beaudry: Are you surprised that this is happening and that there’s an interest again in the Oilers and this kind of racing?

QM: I was somewhat surprised. I heard about it maybe two years ago, and I thought, “This is really, really a great venue.” I ran into—at the Grand National Roadster Show in January of this year—I ran into some Oilers that were coming my way in the dark, and they had the Oilers shirts and I said, “Hey, are you guys from New Jersey? Are you the ‘new’ Oilers Club.” And they said, yeah? And I said, “Well, I’m one of the old guys from Carlsbad,” and so that’s how it all began. They said, “You’ve gotta come back in October and join us and run down the beach with us!” And that’s why I’m here.

JDB: And they’ve treated you well?

QM: Oh my word! Every single person for three days now—I haven’t met one person that I didn’t like, and I don’t like a lot of people, and I really don’t. I’m not a real people person. [laughs] They’re phenomenal. They’re true hot rodders—this is phenomenal. I just dearly love it. I can’t wait to get out and do this again and see the bonfire tonight.

JDB: So you’ve gone out a couple of times?

QM: Just once. It takes, I guess, about three hours to try to get through and do it again.

JDB: Personally, I think that today’s traditional hot rods are changing the car hobby because they’re a good entry point for people. I can go out and work on my car and actually feel like it’s mine. I’m creating it. If I screw it up, I can fix it, but if I was to work on my 2014 Mustang, well, now I’ve gotta make it all perfect and order OEM parts and whatnot, but this is a really great level to start at. It’s the beginning…

QM: It truly is, and I’m so pleased that they’re not allowing overhead valve V-8s in this. I mean, this is the early stuff. You know, I started in flatheads and graduated to overhead-valve motors. We started with flathead V-8s and four cylinders—four bangers—but this is where it began. Before me, back in the late Thirties, early Forties, before the war, they were running these four bangers and experimenting with all sorts of things, and here it is again, prewar era, up to [questioningly]…

JDB: Bodies must be American and ’34 or older, and engines and running gear 1953 or older. 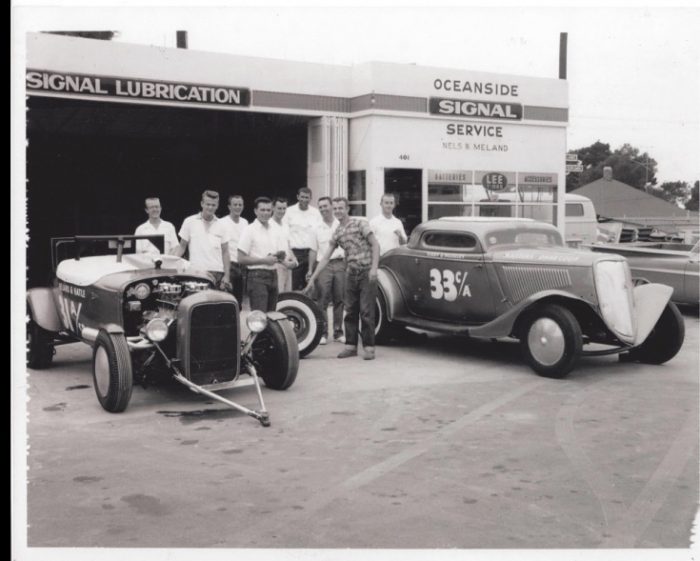 With the rest of the team, Quint is fourth from the left, with the rag in his hand. Photograph courtesy of Quint Meland.

QM: It is truly exciting. Frankly, I’m surprised how firm the sand is. I’m a West Coast guy, and you know, you get out there and you aren’t going to run. Maybe in some places, maybe down by Pismo in that area there might be some sand down there that would be great to run on. Well, I guess you can still run on some of the Lakes. I haven’t been out there—like I said, I haven’t had this [points at jacket] on in 55 years. It’s just a thrill for me.

JDB: Had you continued to do things with automobiles over that time?

QM: Yes, I married and had kids and grew up and all that, but I had an AC Cobra that I just sold; I have two ’32 Ford roadsters. One is an AMBR car from ’78 and the other one is another ’32 that we have running again now, and it’s a beautiful car; we just drive it. So, yeah, I’ve never lost the hot rod bug, I just took a hiatus for awhile, and I haven’t raced any of my ’32s They’re not race cars; they’re street roadsters.