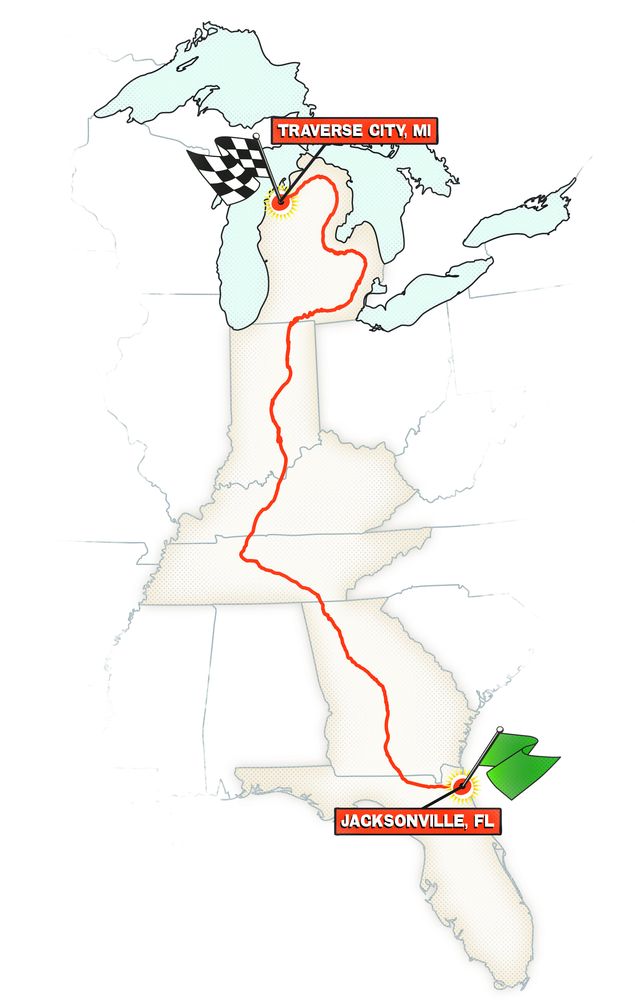 Scheduled to begin on June 24, 2017, and with an announced purse of $150,000 – $50,000 of which goes to the overall winner once again – the Great Race will start in Jacksonville, Florida, and then head in a general northwesterly direction through Georgia, Tennessee, Kentucky, Indiana and Michigan, where it will finish in Traverse City on July 2, coinciding with the city’s Cherry Festival. As has become a Great Race tradition, teams will be able to see many of the route’s notable natural and man-made attractions, though as of this writing the daily lunch and overnight city stops, as well as points of interest, have yet to be finalized.

As this is posted, there’s only a couple of weeks left on the calendar before 120 teams from five nations descend upon San Rafael, California, to compete in the 2016 Hemmings Motor News Great Race presented by Hagerty, which will travel along the historic Lincoln Highway through Nevada, Utah, Wyoming, a smidge of Nebraska, South Dakota and Iowa before finishing in Moline, Illinois; however Great Race and Coker Tire Company owner Corky Coker announced that the 2017 edition of the renowned vintage car rally will travel along the equally historic Dixie Highway.

“We are pleased to be working with the City of Jacksonville and the Historic Springfield Main Street Cruise to bring the Great Race to Jacksonville for the start in 2017. There are more than 450 people just in our entourage from all around the world, and they will be spending four and five days in Jacksonville before the start of the race getting ready for their 9-day, 2,100-mile adventure,” event director Jeff Stumb said.

First run in 1983, the Hemmings Motor News Great Race presented by Hagerty is arguably the quintessential time/distance/endurance rally open to all 1972 and older collectible cars and trucks. Based on experience, team entries compete in five divisions: Grand Champion, Expert, Sportsman, Rookie and X-Cup divisions, the latter reserved for college and high school teams. Initially a cross-country adventure, in recent years it’s been massaged to a more manageable 2,000-plus mile, nine-day test of man and machine, and – like the last few years – the 2017 Great Race looks to continue that practice.

Although the 2016 Great Race has been sold out, competitor/team submissions are already being accepted for ‘17 for those wishing to compete in this south-to-north adventure. In recent years the 120 spots have filled fast; it’s highly recommended to submit entries as soon as possible. For more information, or to register, visit GreatRace.com.

A quick note to those who would like to catch segments of either the 2016 or ’17 Great Race: As is always the case, the exact rally route is kept secret to prevent teams from practicing. Before the start of each day’s stage, teams are given course instructions just one hour before their start time; no GPS units or maps are permitted in rally vehicles, so drivers and navigators must rely on analog watches and course instructions to get from point A to B successfully and on time. The best locations to see the cars and meet the drivers/navigators are at the day’s lunch and dinner stops, where there are no spectator admission fees. Exact locations for each day’s stops will become available as details are finalized, or you can monitor the official Great Race website where you can also learn more about the Great Race history, rules, and award structure.