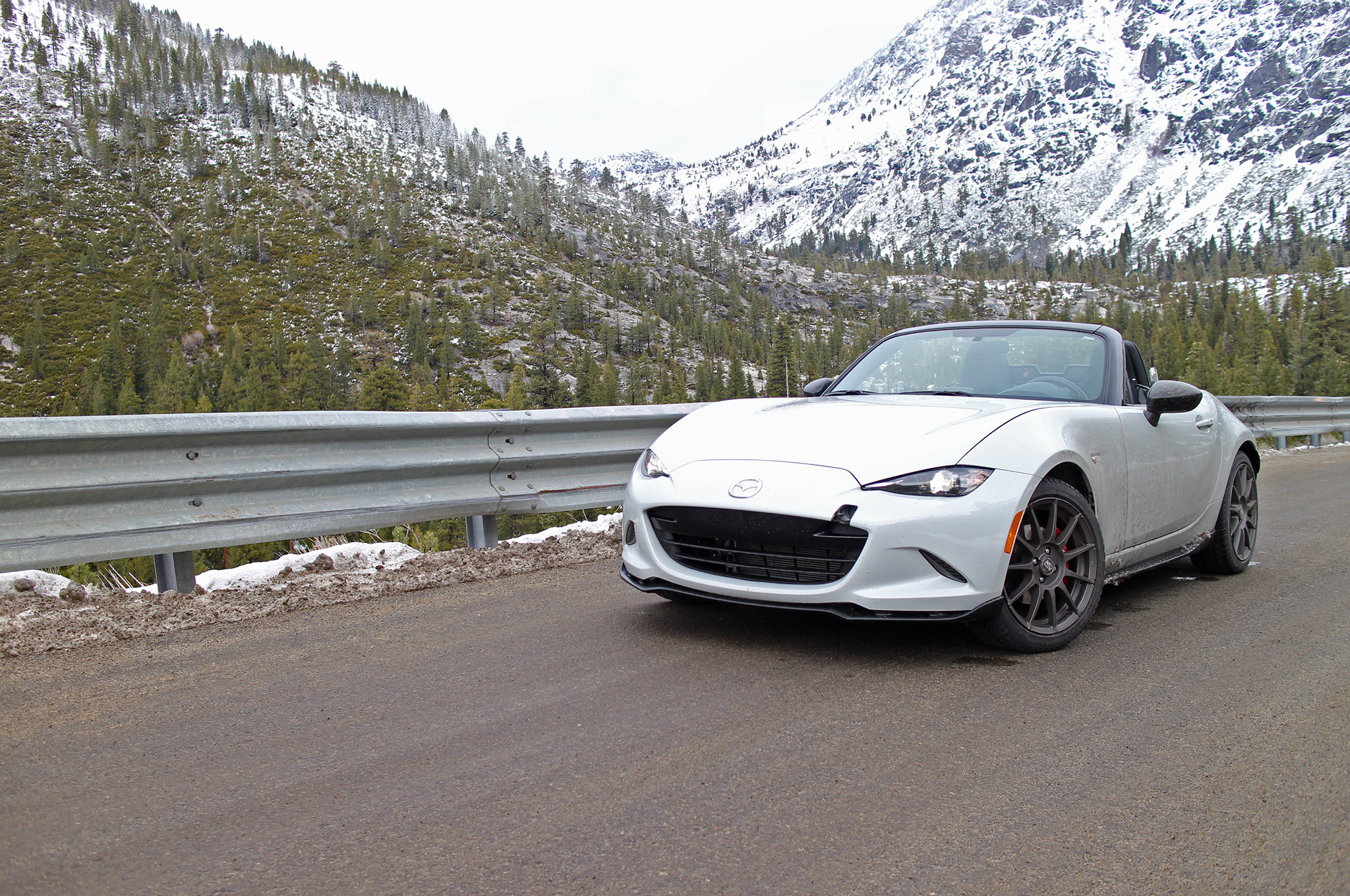 Miatas on ice seemed to be a popular thing earlier this year. It all began with the inaugural Mazda Ice Academy, which included the opportunity to drive (errr, mostly drift) the Miata on a snow-filled race course. Then, bossman Ed Loh appeared on “Fox & Friends” to discuss his picks for winter driving and there, parked alongside a Subaru Forester, was an Mazda MX-5 Miata. His argument? A good set of winter tires makes almost any car suitable for the snow, including a rear-drive, soft-top convertible.

Around the same time those two events took place, I was snowboarding in Lake Tahoe. But instead of taking the #MTGarage Miata for my trip, I wimped out and took the #MTGarage Mazda CX-3 instead. The CX-3 was solid in the snowy conditions (thanks to all-wheel drive and snow tires), but I did regret not taking the Miata.

When I had a second chance to test out the Miata’s winter abilities in California’s Sierra mountains, I logged on to www.tirerack.com to order a set of winter tires. Mazda recommended a set of Blizzaks, but due to time constraints and Tire Rack’s inventory, we went with Pirelli Winter Sottozero 3 tires, which were wrapped around OZ wheels. Three days later, our long-term Miata was wearing new snow shoes and ready to take on for the snow-capped hills (along with our long-term Range Rover Sport and associate online editor Jason Udy for support/rescue).

As we headed north on the 395, we hit our first patch of snow in Mammoth Lakes, still three hours away from Lake Tahoe. I slowed down the pace and the Sottozeros had no issues handling the thin layer of snow on the highway.

Editor-in-Chief @EdLoh will be talking Best Cars for Winter Driving on @foxandfriends in about 15 minutes. pic.twitter.com/EWdkk4eJJV

In Lake Tahoe the next morning, I was back on the roads early enough to find unplowed roads and 1-2 feet of white stuff on the ground. Thankfully, my fears of spinning out into a ditch or onto oncoming traffic never materialized. The Miata soldiered through the sketchy conditions without little drama, whether it was deep snow or fairly steep inclines. We capped off the Miata’s trip in a wide open, snow-covered parking lot where we performed countless figure-eight laps. Here, the Miata had a tendency to oversteer, but we didn’t mind. Neither did the snow plower who stopped to observe and later drove away (guess we did his job for him). More importantly, the trip proved that snow is not a valid excuse to leave your Miata at home.