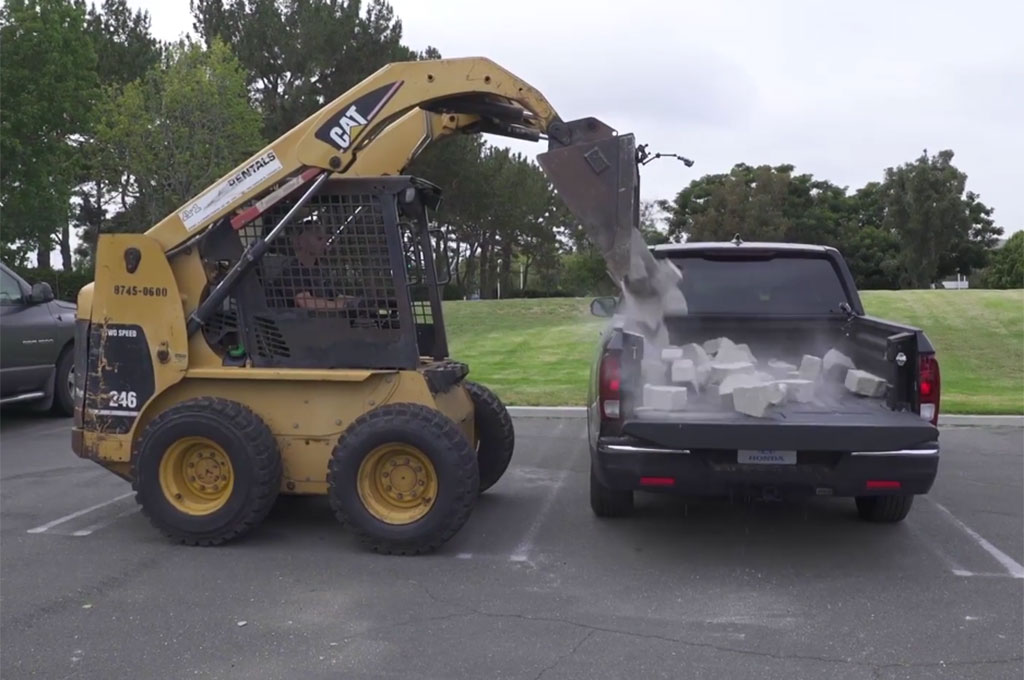 Earlier this week, Chevrolet launched a scathing ad campaign that shows how the Ford F-150’s aluminum truck bed holds up to abuse. The videos don’t end well for Ford, with the unlined aluminum bed appearing to suffer multiple punctures. Obviously, the Chevy’s steel bed comes out looking like the better choice as it survived with only a few dents. Now, Honda is getting in on the truck-bed-testing action with the 2017 Ridgeline.

Honda replicates the test using 60 rough-cut landscaping stones, similar to the blocks used in the Chevy video. Because a different loader is used, it’s difficult to say whether the blocks are dropped from the same height as in the original ad, but the results paint the Ridgeline’s bed in a favorable light. The composite bed, which comes standard on all Ridgelines, doesn’t show as much wear as either the Silverado or the F-150. The black color of the sheet-molding compound plastic helps hide the scratches sustained from the concrete blocks, which weigh between 14 and 16 pounds each. The presenter then shows that the dual-action tailgate and in-bed trunk still function as they normally would.

Of course, you can’t directly compare the midsize, unibody Ridgeline with two full-size, body-on-frame pickups, but this simple video was a good way for Honda to get a word in on this hot-button topic – and highlight some of its product’s strong points.

Check out the video for yourself below. Skip ahead to 1:15 if you just want to see the results of the test.