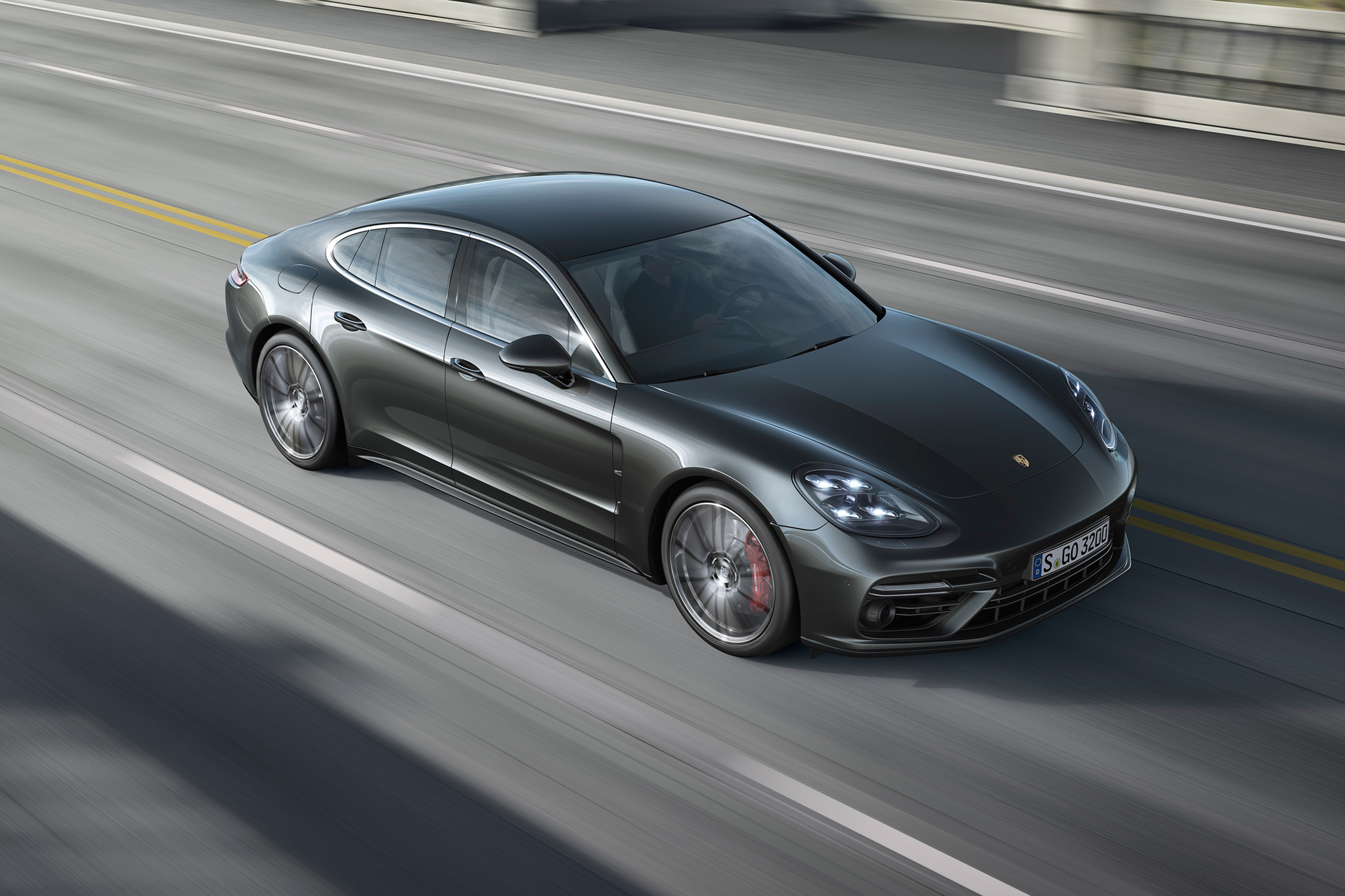 Photos of the 2017 Porsche Panamera leaked last week and reaction was overall positive, with most readers favoring the looks of the new second-gen model over the current one. It looks less like a sea mammal and more like the classic 928 coupe, one reader observed. And now Porsche has unveiled more details about the four-door sedan, which is lighter, larger, and offered with two new engines. 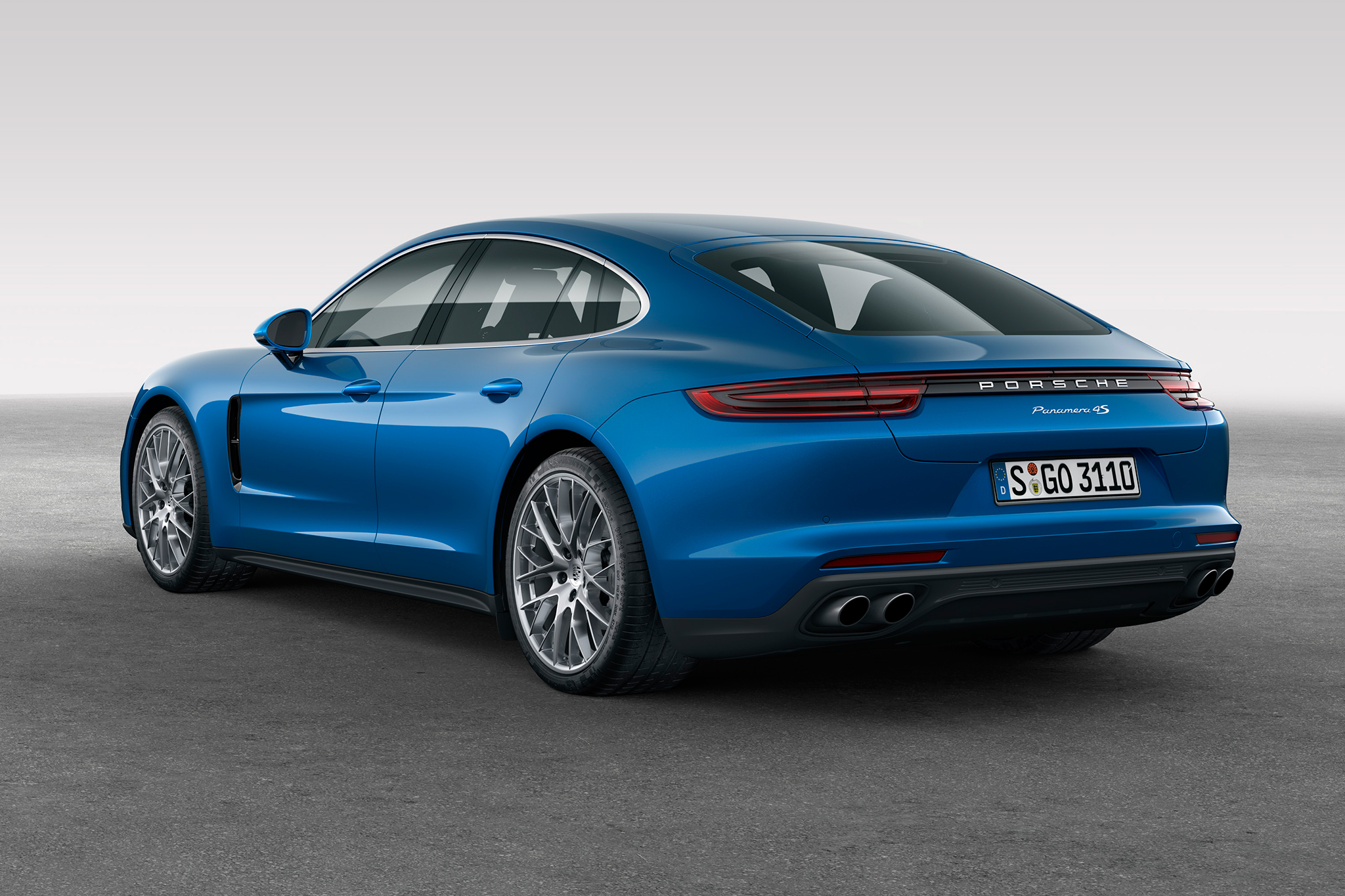 One of the first models to launch in Europe is the 2017 Panamera 4S, which gets a 2.9-liter, twin-turbo V-6. The big news here is that the turbos are housed within the “V” of the cylinder banks, instead of the traditional location closer to the bottom of the engine. The “hot V” layout results in a more compact engine that can be mounted lower for better balance, which is the same reason Mercedes did it with its twin-turbo 4.0-liter V-8. Throttle response improves as well since the turbos are now closer to the cylinders. Porsche says the Panamera 4S will make 434 hp and 406 lb-ft of torque, which is 14 hp and 22 lb-ft more than the 3.0-liter supercharged six-cylinder powering the 2016 Porsche Panamera 4S. The new 2017 Panamera 4S also debuts a new PDK eight-speed dual-clutch automatic. Acceleration for the all-wheel-drive Panamera 4S sedan is estimated to be as quick as 4.2 seconds from 0-62 mph (with the Sport Chrono Package).

Also debuting early on is the all-wheel-drive Panamera Turbo. Its 4.0-liter V-8 also has its twin turbos within the cylinder bank and is mated to an eight-speed PDK. Porsche says the Turbo makes 542 hp and 568 lb-ft (22 hp more than before) and should run to 62 mph in just 3.6 seconds with the Sport Chrono Package. The Panamera Turbo also features the automaker’s first-ever Adaptive Cylinder Control, which is Porsche-speak for its active cylinder deactivation system that deactivates four cylinders under light driving situations. The automaker says the system reduces fuel use by up to 30 percent. Another one of the Turbo’s neat party tricks is an active rear spoiler that splits and widens as it extends to create more surface area. Standard models receive less-fancy active spoilers. 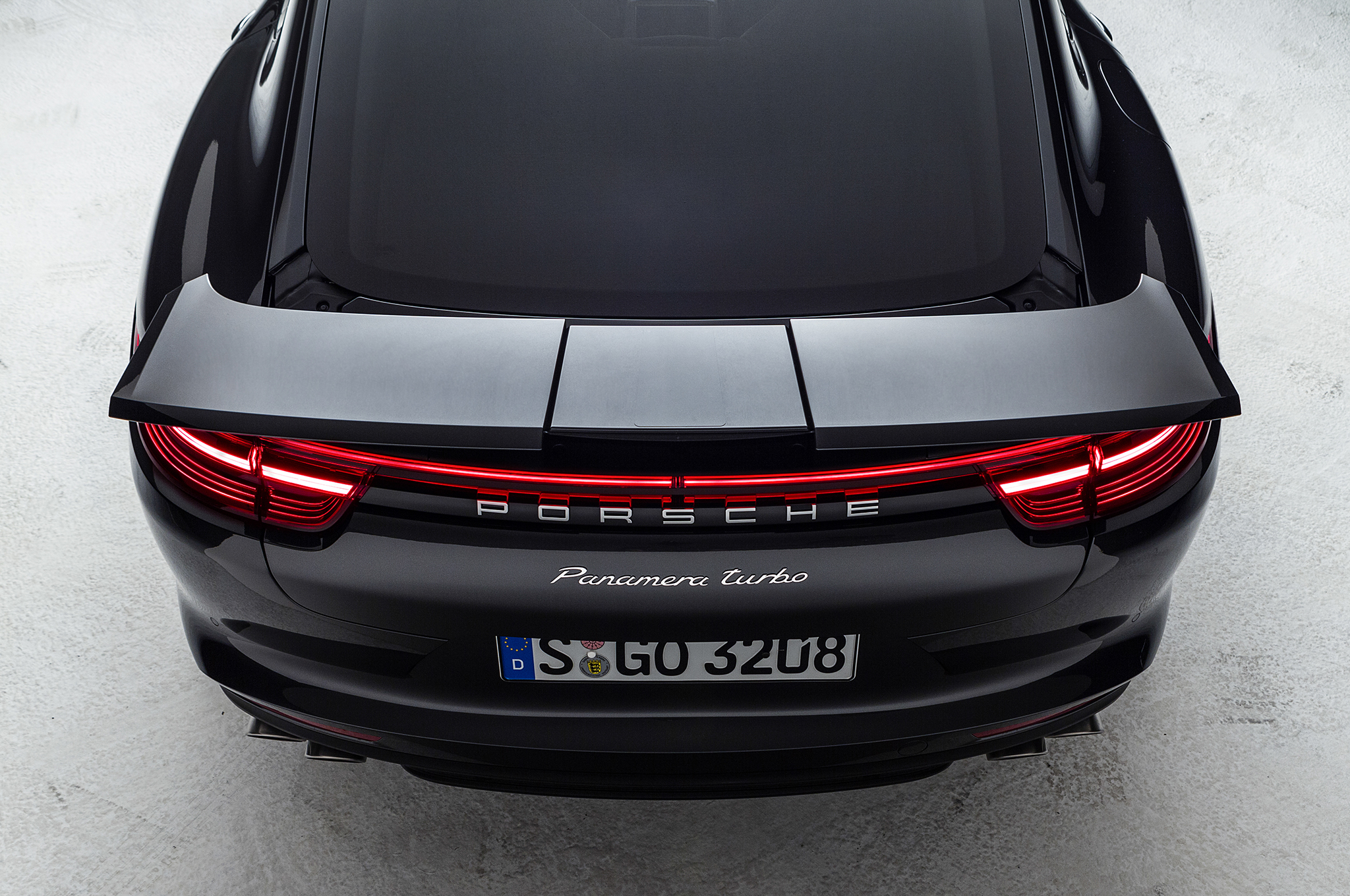 European customers will also have the option of a new eight-cylinder, twin-turbo diesel engine rated at 416 hp and 627 lb-ft. This engine likely will not make it to the U.S. anytime soon until the automaker settles its diesel issues in the ‘States.

As previously reported, the Panamera now rides on the Volkswagen Group’s new MSB architecture. Most body panels are made of aluminum, which Porsche says has helped cut down weight by almost 200 pounds. The weight savings, along with a new adaptive air suspension and rear steering technology (trickled down from the 918 Spyder and 911 Turbo), should result in big improvements in handling over its predecessor.

The new Panamera is also larger than before. Overall length has increased 1.3 inches to 198.8 inches, while its width of 76.3 inches is 0.2 inches more than before. It’s also 0.2 inches taller at 56 inches, though Porsche says the roofline’s tail end is 0.8 inches lower than the first-gen model.

Inside, Porsche has dramatically cleaned up and digitized the cockpit. The rows of buttons found in the current model have given way to capacitive, touch-sensitive controls and toggle switches. The instrument panel showcases an analog tachometer that is now flanked by two 7-inch digital displays. The steering wheel has also been redesigned and is influenced by the 918 Spyder, including its rotary Mode Switch drive selector that also includes a Sport Response button that activates the turbo overboost function.

Porsche says the 2017 Panamera will appear in European showrooms this fall. The new four-door should make its U.S. debut around the same time, perhaps at the 2016 Los Angeles Auto Show in November, before going on sale shortly after that.