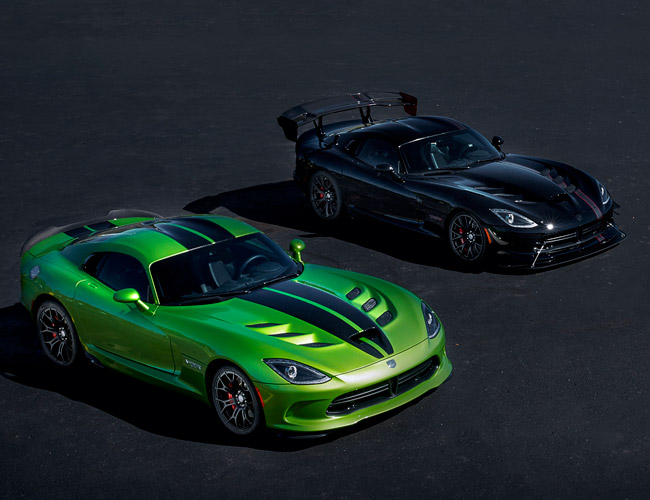 Nestled in FCA’s contract with the United Auto Workers Union was language that signaled the shutdown of the plant in Detroit where the Dodge Viper is assembled — with no plans to relocate. Well, now it’s been made official. But Dodge wants to celebrate the Viper’s long life, not its death. And to celebrate the end of a storied production run, FCA is introducing a final run of special editions, some commemorative, some ridiculous — as is tradition in the automotive industry. For quite some time now, it’s been a horribly kept secret that Fiat Chrysler Automobiles was planning on killing off the Dodge Viper.

A total of five different special editions will be made, butswiss replica watches only between 25 and 100 examples of each will be produced. For instance, there will only be 25 Snake Skin GTCs made, which come with the Advanced Aerodynamics Package and a black interior (though assuming that there are 25 people out there who’d want a candy-apple-green Viper is probably a bit optimistic). The other four models are all based on the ACR, the most track-focused Viper of them all, and come with the Extreme Aerodynamics package (massive rear wing, dive planes and front splitter). The one we’re eyeing commemorates the Viper’s 1997 FIA GT2 championship win with a nostalgic white paint job and blue racing stripes.

In an age where even supercars are going hybrid and with smaller engines, and where fewer cylinders and turbos are now the norm, the Viper’s 640 horsepower 8.4-liter V10 seemed to be a holdout from a world we’d long left behind. And most of the world thought so, too; only 676 were sold in 2015. That doesn’t mean we won’t miss it. The Viper was one of America’s first modern supercars, and for that it has an eternal seat in the Pantheon of bedroom-wall-poster icons. But as cool as some of the last-edition Vipers are, for the prices asked we’d recommend picking up a couple of the first-generation Vipers, because they just became collectables.