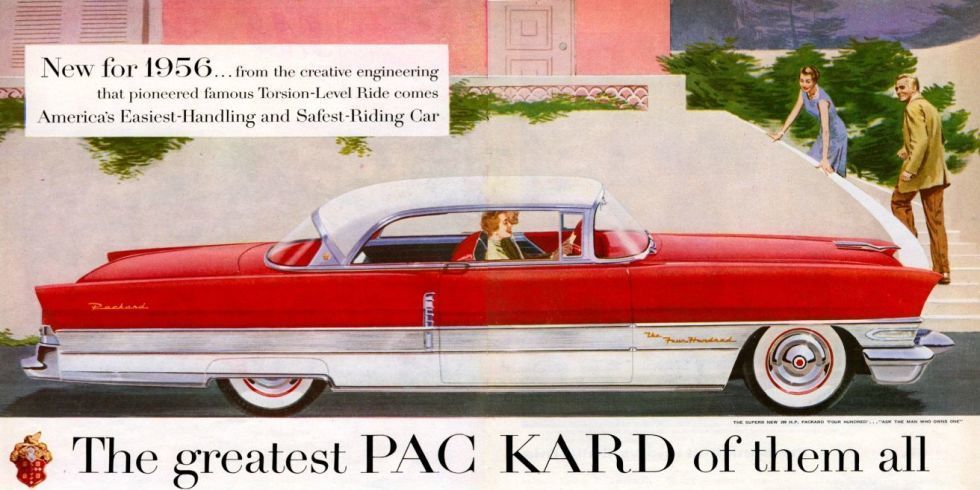 The Last Real Packard Actually Was Produced 60 Years Ago

Packard was once America’s foremost luxury car maker, perhaps second only to Duesenberg, or Pierce-Arrow. Beloved on both sides of the Atlantic, it became known for its smooth engines and handmade craftsmanship. FDR rode in a Packard, the first armored limousine in the world. Japan’s royal family owned ten. When its factory was built in Detroit in 1903, it was the most modern automotive production facility in the world. It was building V12 engines by 1916, its legendary “Twin Six.” Ask the Man Who Owns One! Packard survived the Depression and both world wars, building Rolls-Royce Merlin engines under license for P-51 Mustangs, surviving World War II with nearly all of its finances intact.

And it took just four years for the Packard name, founded in 1899 by James and William Packard, to be run into the dirt. Studebaker was in debt when Packard merged with it in 1955, and the once-healthy latter took on the former’s debt. What could an independent American carmaker do against the Big Three? Nash and Hudson and Packard and Studebaker nearly formed America’s Auto Union, instead creating American Motors (AMC) and Studebaker-Packard. Around that time, president James Nance tried valiantly to bring Packard back upmarket, but he was faced with too many models—some formed from the rear ends of one with the front ends of another—and too much interest by management in making an “everyman” car to achieve his goals. He couldn’t secure tooling. The cars were unreliable, badly-built, and consumers revolted. Richard Teague’s sharper styling didn’t help (he eventually went to the aforementioned AMC). Packard’s last defender was ousted and eventually went to Ford, and Packard’s fate was sealed.

The last car fully designed by Packard, a four-door Patrician, rolled off the assembly line at Connor Avenue on June 25, 1956. Packard-branded cars would continue to scrape by for three more years, fully in the wraps of the company now known as Studebaker-Packard, built in South Bend, Indiana, and amounting to nothing more than rebadges. (Ask The Man Who Owns A “Packardbaker.”) Studebaker-Packard wouldn’t drop the latter portion of its name until 1962, right around when the Avanti came out. Out with the old, and all that, and yet still clinging onto the past. And maybe Only Nineties Kids Will Remember the wholly unnecessary neoclassical “revival” of 1999, but that’s a bizarre footnote for another time, or perhaps no time at all.

Related ArticleThe Cars of 1960 Explain Why Your Grandparents Drive Differently

All the things that went wrong with Packard—a move downmarket, chasing volume instead of brand image, strange styling, intense cost-cutting, defects, recalls, pissed-off dealers, model lineup bloat, the dreaded scourge of “badge engineering,” a desperate merger with a tarnished carmaker just to compete with bigger companies—are still happening today. Maserati comes to mind. The last Honda Civic. Every dead GM brand that didn’t survive the bailout, plagued by lost identities and muddled marketing, surviving this far only by dint of pure nostalgia. Mercury. Plymouth. The Mercedes-Benz CLA. Is Volkswagen going to follow the same route? Or Fiat-Chrysler? It’s always sad when a carmaker dies, and we never wish for that to happen. Not even for Mitsubishi.

Packard’s Connor Avenue plant, where its final cars were built, had been leased from Chrysler at the time, and went right back to Chrysler. It is where the Dodge Viper is currently built, but not for long. Packard’s factory still stands today, hollow and burnt, a survivor of oh so much. Neither the city of Detroit nor an army of shyster developers know what to do with it.

Image via Deano In America