You are here: Home  /  Auto Tech  /  The Shelby Cobra that began the legacy, CSX2000, heads to auction in Monterey
Auto Tech 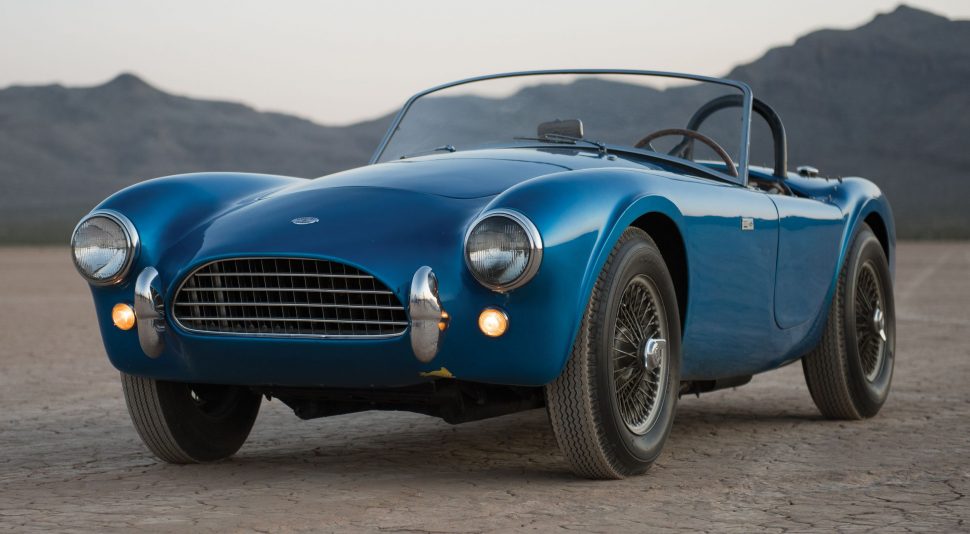 The Shelby Cobra that began the legacy, CSX2000, heads to auction in Monterey

When Bristol stopped production of the engine in 1961, it looked like the end of the road for the Ace, but then Carroll Shelby and Ford entered the picture, and the rest is motorsport history. Just one Shelby Cobra prototype was ever built, and it has been owned by Carroll Shelby, and now the Carroll Hall Shelby Trust, since 1962. This August, the Cobra prototype that started the legend, CSX2000, heads to auction in Monterey, California, as part of the RM Sotheby’s sale.

Before there was a Shelby Cobra, there was an A.C. Ace, a British sports roadster powered by a six-cylinder engine sourced from airplane manufacturer Bristol. 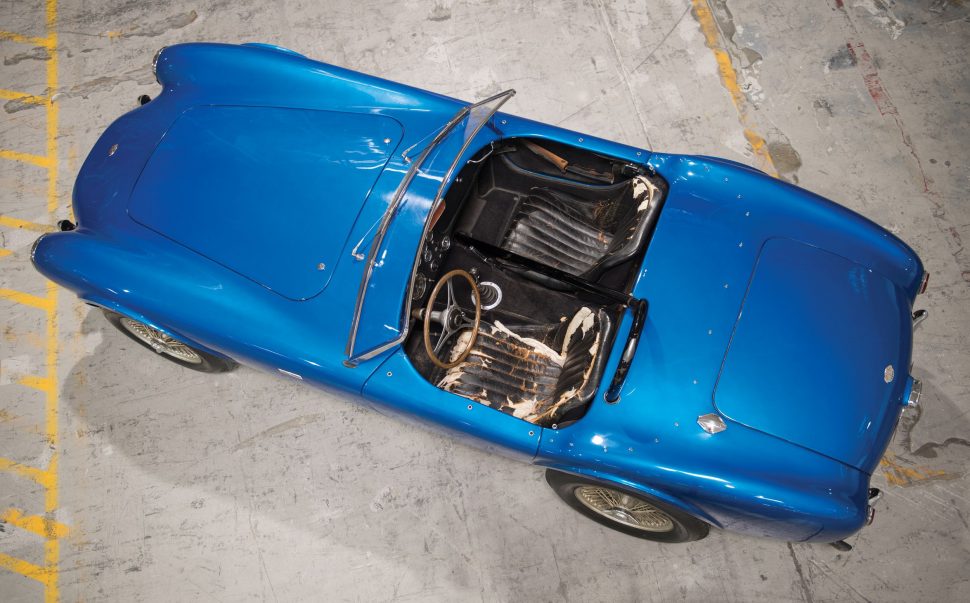 The idea of a big engine in a small car was nothing new, and Shelby was never one to pass up an opportunity. When he heard of the Bristol engine’s demise, Shelby wrote to A.C. Cars’ Charles Hurlock, suggesting that an American V-8 may be just the thing needed to keep the Ace going. The idea was well received in the U.K., but the next step for Shelby was finding both a suitable V-8 and a willing supplier. 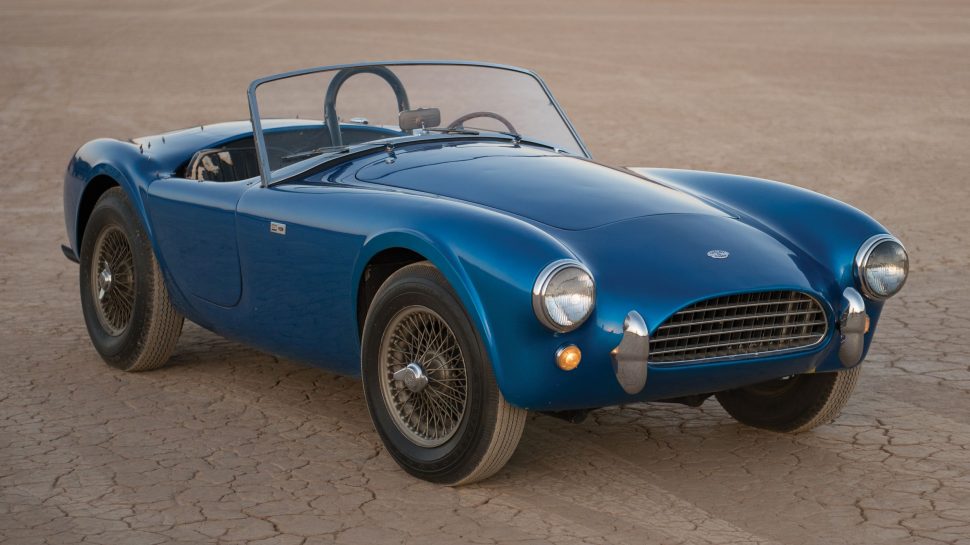 It was Dave Evans of Ford who suggested Shelby try out the automaker’s new, lightweight 221-cu.in. V-8, and Evans arranged for a trio of the engines to be shipped to Dean Moon’s shop in Santa Fe Springs, California, where Shelby maintained an office. Moon wasted no time extracting additional horsepower out of the engine, fitting larger valves, porting the heads, balancing the internals and playing with carburetor setups and ignition timing. Shortly after the 221 was dialed in, Evans called Shelby to advise that a new 260-cu.in. V-8, perhaps better suited to a sports car application, had been developed. Wasting no time, Ford supplied three of these engines to Shelby as well.

In the meantime, Shelby had been in dialogue with A.C. cars, suggesting improvements to make the car suitable for the larger and more powerful engine. In addition to thicker-wall chassis tubing, the modified Ace received a reinforced suspension, a limited slip differential, inboard rear brakes and as the World Registry of Cobras and GT40s, Fourth Edition relates, a “general beefing up” to accommodate the 221 V-8 supplied for testing and development in England. 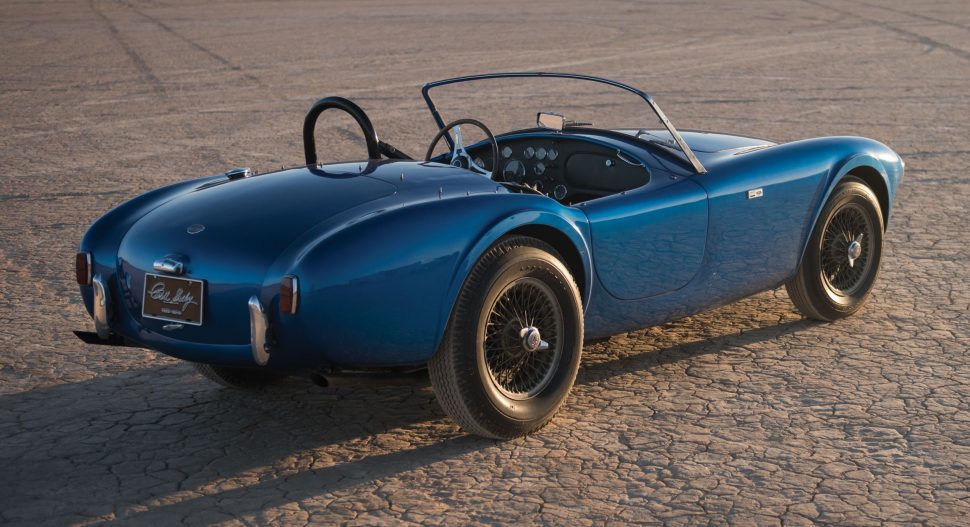 The good news was that the Ford V-8 fit neatly in the Ace’s engine bay, requiring no significant modifications to the chassis. The car’s original transmission, designed to accommodate a maximum of 90 pound-feet of torque, was no match for the Ford V-8, so a Ford four-speed manual was bolted in instead. In total, the changes added roughly 25 pounds to the car, but increased its performance significantly. 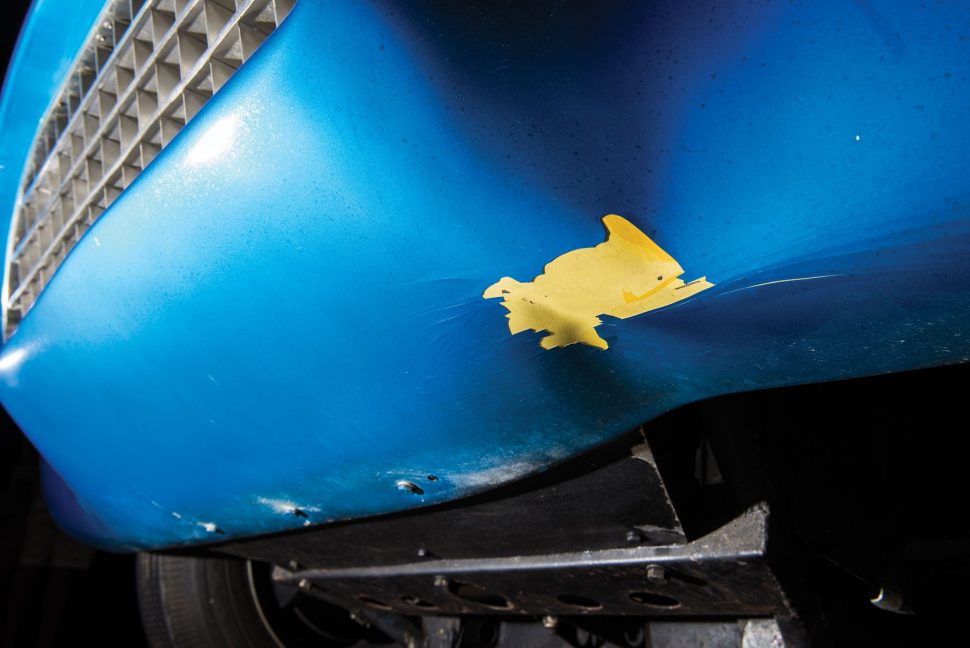 Initial development and testing was carried out by Derek Hurlock, Charles’s brother, at the Mira circuit in England. Shelby was there to supervise, and the data gathered demonstrated that further modifications to the front spindles, A-arms and leaf springs were needed to ensure reliability. In February of 1962, A.C. finished its work on the car and shipped it to Shelby’s attention in Santa Fe Springs. 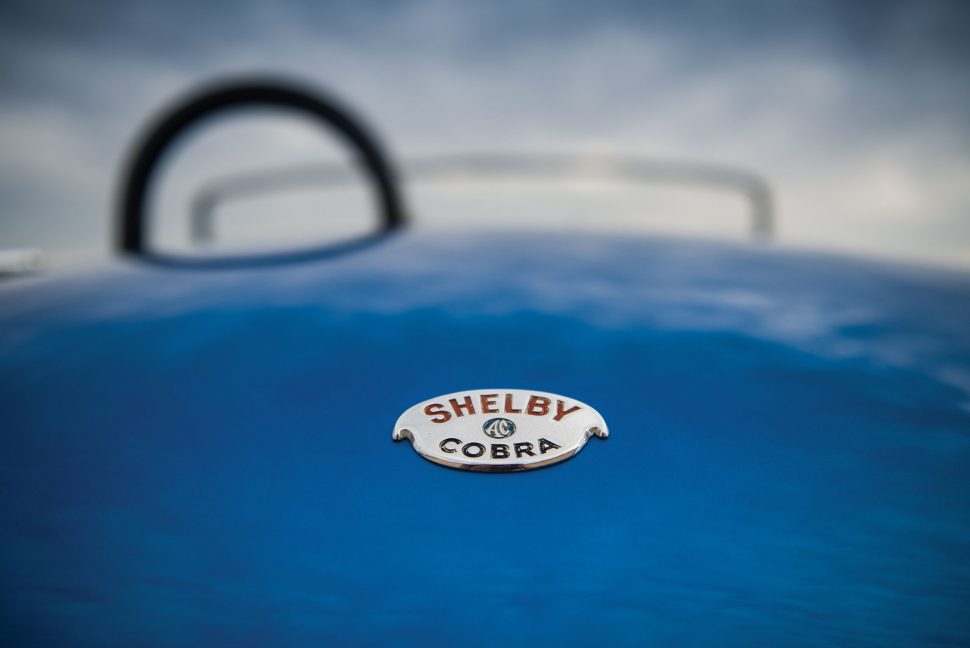 In The Cobra Story, Shelby talks of a dream he had while the car was in transit. In the dream, Shelby envisioned the name “Cobra” gracing a new sports car. After hastily jotting it down on a bedside note pad, the Texan began researching the name’s availability. Trademarked by Crosley for its copper-brazed (Copper BRAzed) engine, Shelby left it for his lawyer to sort out, and was soon given approval to proceed. Peter Brock, then a Shelby American employee, designed the first Cobra name badge, the only one to incorporate both the AC logo and the Shelby Cobra name. 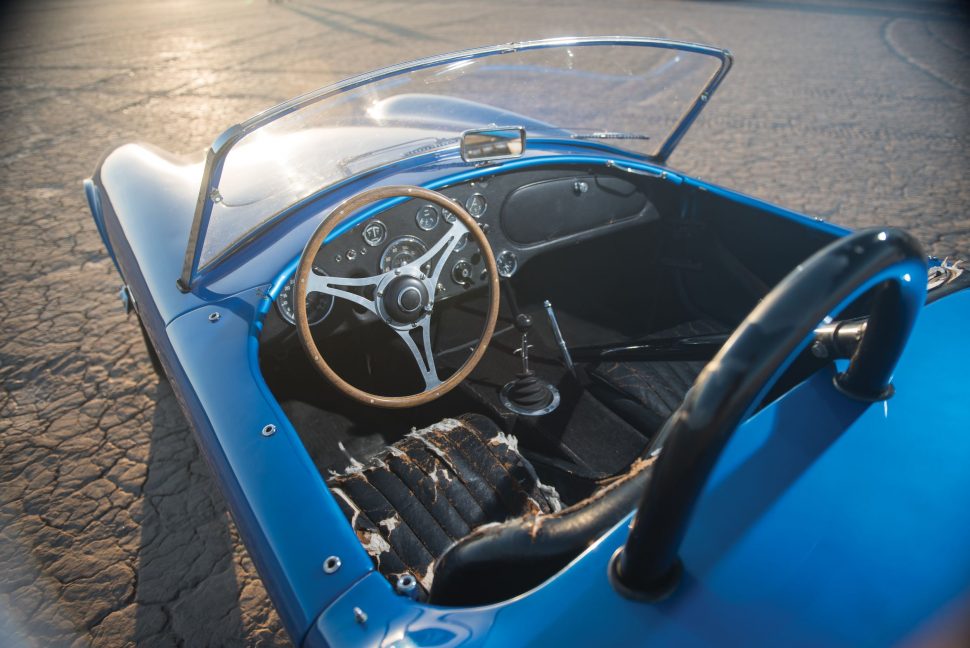 Once CSX2000 arrived at Santa Fe Springs, the shop dropped in the 260 V-8, fed by a single four-barrel carburetor and reportedly rated at 260 horsepower. Eager to build publicity for the new car, the bare aluminum skin was polished with fine steel wool for its first photo shoot, but by the car’s public debut (at the April 1962 New York Auto Show) it was finished in a pearl yellow, a color that Shelby was told would look the best under the venue’s fluorescent lights. 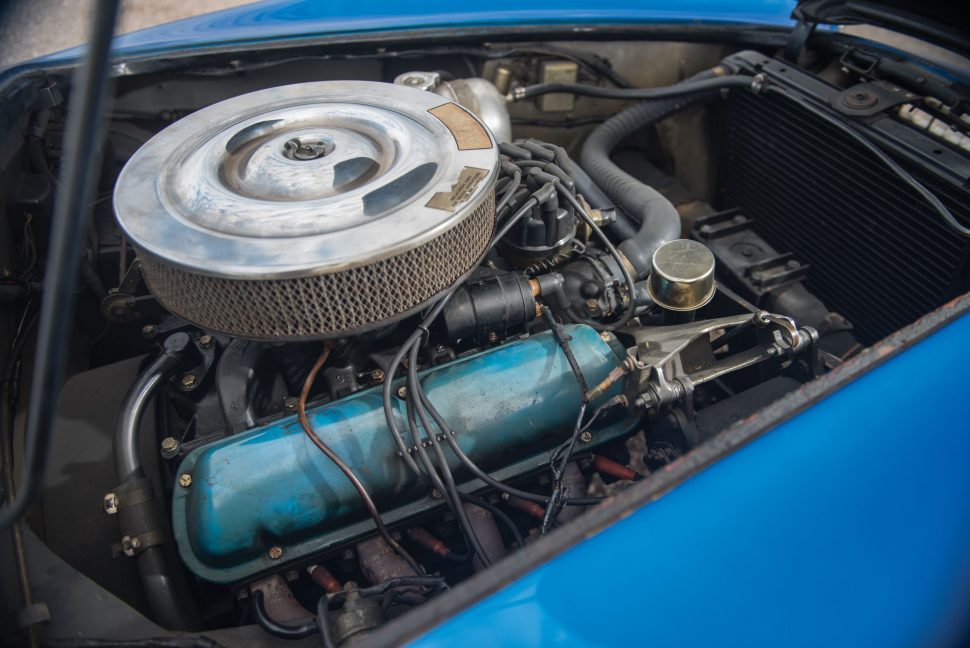 It didn’t stay yellow for long. In order to create the illusion of cars already in production, CSX2000 was painted a variety of colors as it was sent out to magazines for review. Though enthusiasts believed that each magazine reviewed a different Cobra, CSX2000 was the sole car in the United States for seven months, until autumn of 1962. 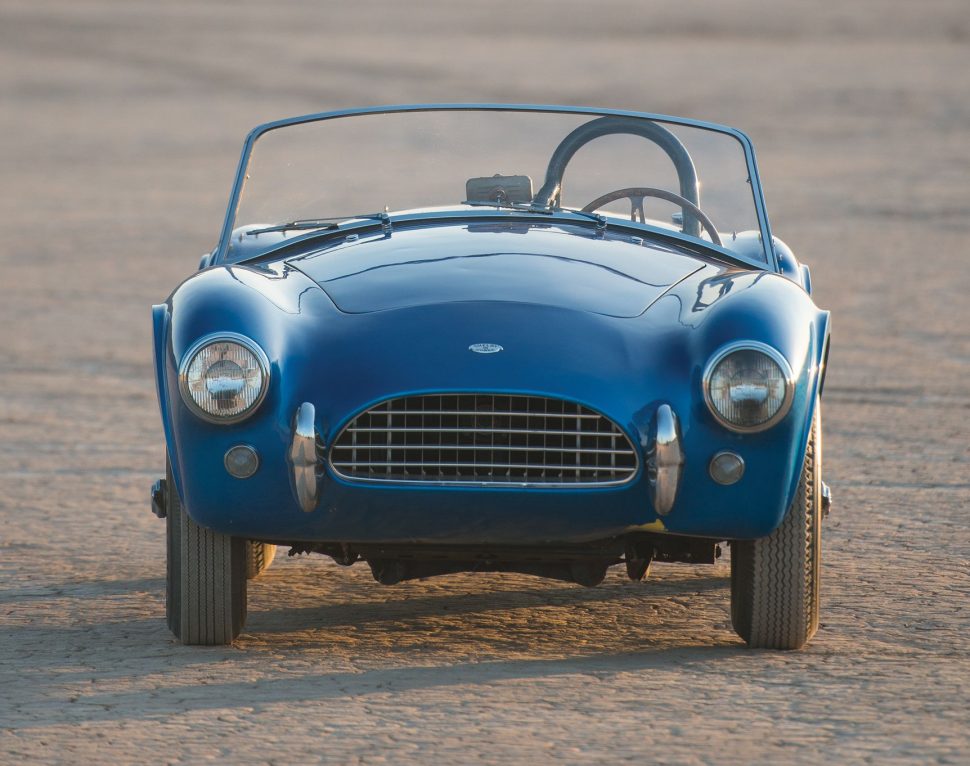 Given the car’s performance, it hardly mattered. Reviewed with accolades by Sports Car Graphic, Car Life, Road & Track, Cars, Playboy and Hot Rod, the Cobra was practically legendary before additional inventory began hitting the docks. As Road & Track reported in its September 1962 issue, the 260-powered Cobra was capable of sprinting from 0-60 in 4.2 seconds, on the way to a top speed of 153 MPH, and at the drag strip, it ran through the quarter-mile in 13.8 seconds at a trap speed of 112 MPH. 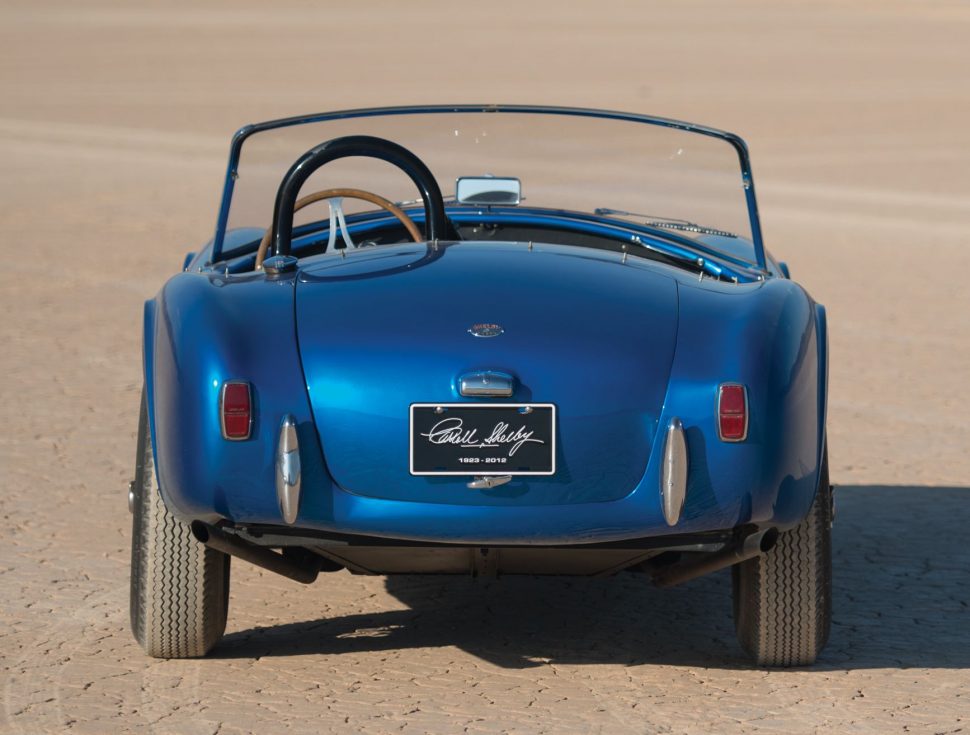 Following its role on the show circuit and as a factory demonstrator, CSX2000 spent time at the Carroll Shelby School of High Performance Driving. Later restored, fitted with painted wire wheels and a driver’s roll hoop and sprayed in the metallic blue it wears today, the Cobra prototype was featured at the Petersen Autorama museum in the early 1970s, and received mention in numerous texts on Shelby and the Cobra. 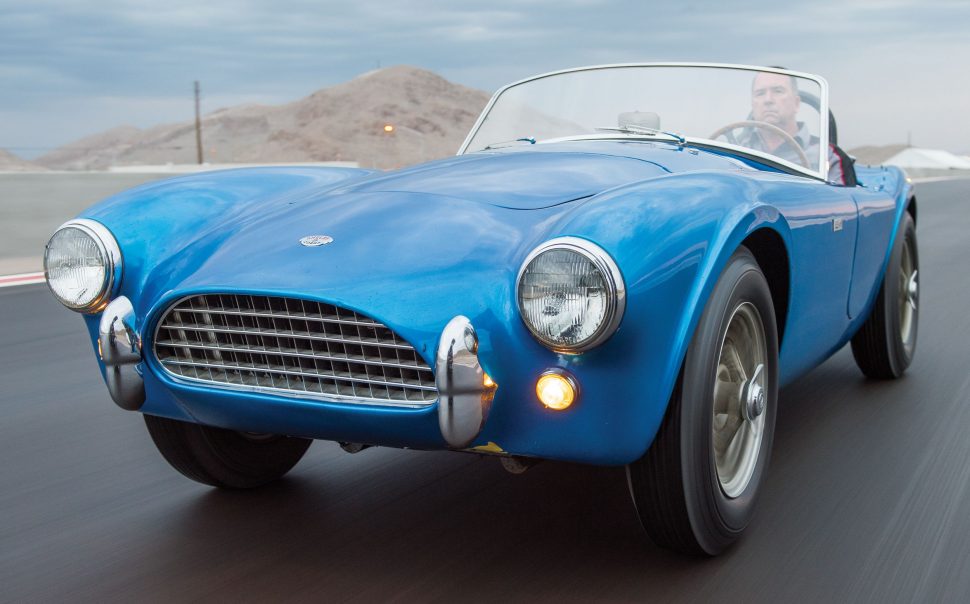 In 2012, CSX2000 was shown at both the Pebble Beach Concours d’Elegance and at the Monterey Motorsports reunion, in recognition of the Cobra’s 50th anniversary, and in the years since has been in residence at the Shelby Heritage Center in Las Vegas, Nevada. Offered for sale by the Carroll Hall Shelby Trust for the very first time, CSX2000 may well be the most collector-desired Cobra of all. No pre-auction estimate will be published, though RM Sotheby’s encourages interested bidders to contact the company’s specialists for additional information.

The RM Sotheby’s sale takes place on August 19 and 20 at the Portola Hotel and Spa in Monterey, California. For additional information, visit RMSothebys.com.