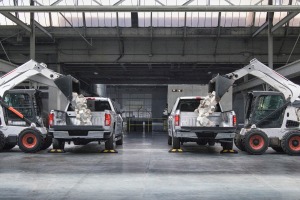 DETROIT — A new 2016 Chevrolet Silverado advertising campaign is heightening the rivalry against the Ford F-150 with a test that claims the Silverado’s steel bed is more durable than the F-150’s stamped aluminum bed.

Chevrolet recruited real people to watch as front loaders dumped 825 pounds of landscaping stones into the truck beds. Demonstrations were done without bedliners.

Chevrolet claims that the F-150’s bed was punctured and cracked, while the Silverado sustained minor damage to its roll-formed steel bed.

This “demonstrates why Silverado is a smart choice for customers shopping for a truck they can use as a truck,” Chevrolet said in a statement.

Ford dismissed the test as a “marketing stunt.”

“When you’re the market leader for 39 years, competitors sometimes try to take shots at you with marketing stunts,” wrote Ford spokesman Mike Levine in response to an Edmunds query. “The fact remains that F-150’s high-strength, military grade, aluminum-alloy cargo box offers the best combination of strength, durability, corrosion resistance, capability, safety and fuel efficiency ever offered in a pickup.

“We have built nearly a million new F-150s and our lead over the competition continues to grow.”

In a media conference call on Wednesday, Sandor Piszar, Chevrolet truck marketing director, said the commercial is “not an attack on Ford. It’s not an attack on aluminum.”

He added: “This is an important marketing message for truck customers. The truck bed is the heart and soul of the truck. A lot of these folks use a truck to earn a living.”

Piszar noted that the Silverado uses aluminum in the hood, engine and chassis components, but not the bed.

The test was conducted using 12 pairs of Silverados and F-150s all bought from dealer stock, Chevrolet said.

Chevrolet officials would not discuss whether the next-generation Silverado, which is due out in 2018, will feature an aluminum bed. They said they are “continuing to evaluate new materials” for future versions of the truck.

The Silverado ad blitz will run in several spots, including ESPN, NASCAR programming and in 2,400 movie theaters nationwide.

It debuts during Chevrolet’s Truck Month promotion that offers zero-percent financing for 60 months, plus up to $8,250 in cash on some vehicles, including the 2016 Silverado 1500 Crew Cab LT 4WD.

Edmunds says: The battle between the two biggest pickup brands heats up, something that shoppers should keep in mind as they head out to showrooms.