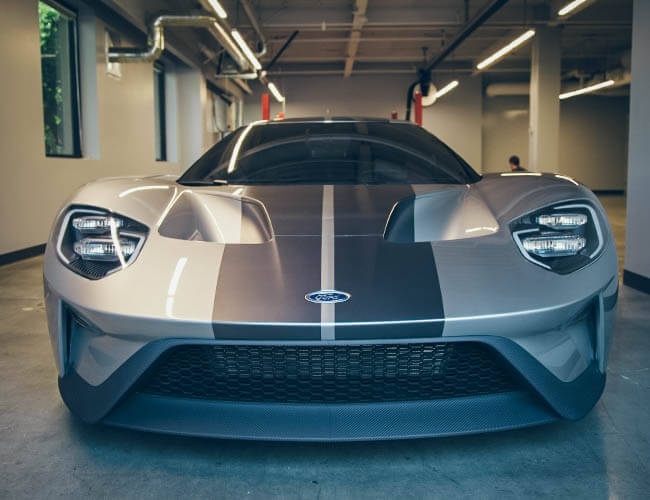 The 2017 Ford GT, an Inside Look at Ford’s Newest Supercar

Where the ‘05 GT only had ABS and an operatic V8 to boast, the ‘15 GT brings Ford’s supercar legacy into the 21st century with a new turbocharged engine, refined aerodynamics, and 10 million lines of code in 28 processors and sensors that generate 300MB of data every second. The GT has finally left analog behind and switched to digital. From the door handles and tire pressure sensors to the active aerodynamics, nearly everything on the car is recording data and adjusting accordingly. “The GT, for us, is the culmination of a decade’s worth of work”, explained Ford’s new CEO Mark Fields. “It is a showcase for a lot of the technologies we’ve been developing.”

Standing over Ford’s new supercar in the garage at their new Innovation and Technology Center in Silicon Valley, two things become blatantly obvious: one, it cannot be mistaken for anything but a Ford GT, and two, it’s miles ahead of the last-generation GT.

The GT legacy extends back more than simply a decade of development. Back in the ’60s, Henry “The Duece” Ford II, threw a hefty amount of resources and capital at a racing program after a deal to buy Ferrari fell through. Ford wanted revenge against Enzo Ferrari, and he wanted to ensure that the GT40 would beat Ferrari at their own game, on a world stage, at Le Mans. It did, and won four times in a row from’66-’69. For its time, the Ford GT40 racer and its road-going counterpart stunned the world and pushed technology and innovation forward for race cars.

Then, in 2005, Ford revived the GT name with a retro-modern take on the original: a simple yet sexy design, massive power from a titanic V8 mounted midship and zero creature comforts. It was nearly identical to its forefather and it reminded the world of America’s capabilities in brute power. It was a resounding success and one which is still appreciating in value, despite its lack of innovation. Fairly common features for supercars like traction control, direct injection, drive mode control and adjustable suspension were nowhere to be found on the ‘05 iteration. The Great American V8 in the back wasn’t even designed for GT — it was sourced from the Ford Lightning pickup. Ford’s 2005 ode to the original wore the GT badge well, but it was only in body, not in spirit.

Nobody involved with “Project Phoenix” (the name given to it by the few in the know), whether designer or technician, was even allowed to talk to significant others about the work being done.

10 years later, at the Detroit Auto Show this past January, Ford unveiled a new GT. No one saw it coming. Typically, in the weeks leading up to a big reveal, teaser videos, spy shots, or leaked images flood the internet, leaving nothing to the imagination by the time the CEO pulls back the silk cloth on the car. The new GT, though, was kept a complete secret — even from the majority of Ford employees. Outside of a small group of people, most didn’t know the car was on the drawing board, let alone built, functional and planned for center stage in Detroit. 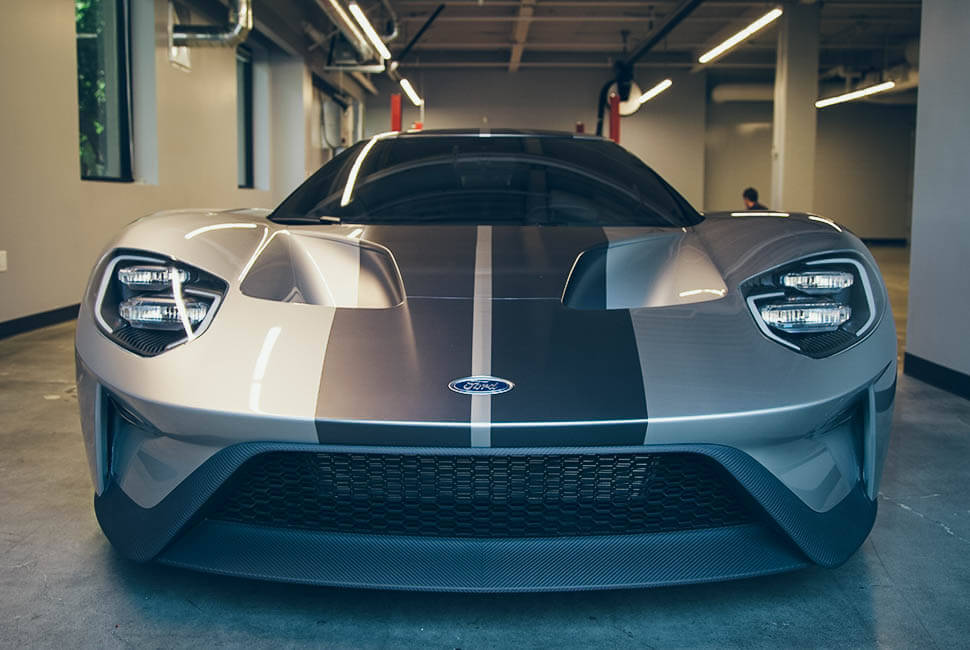 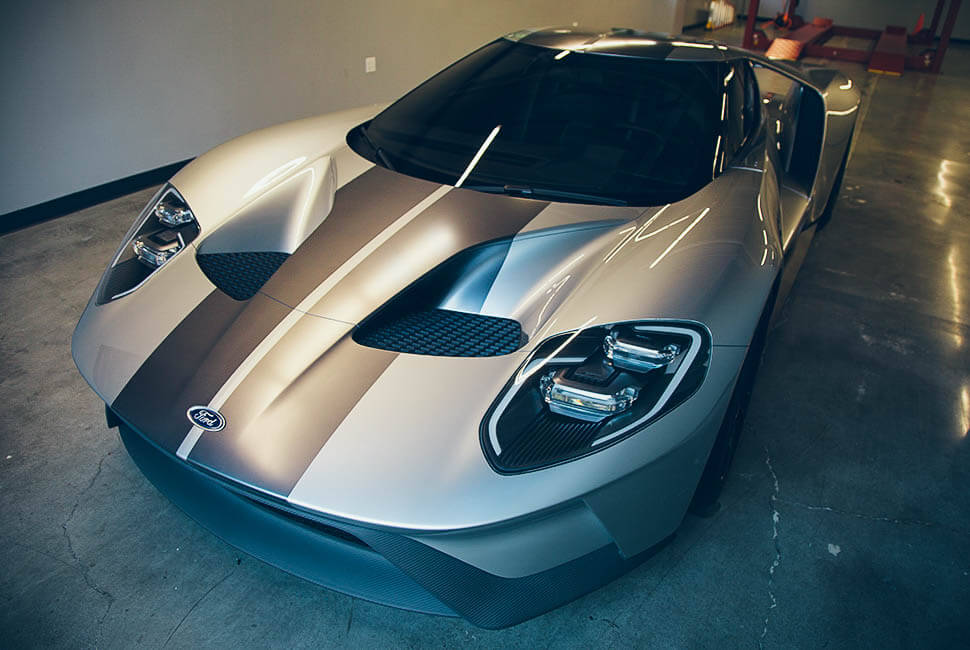 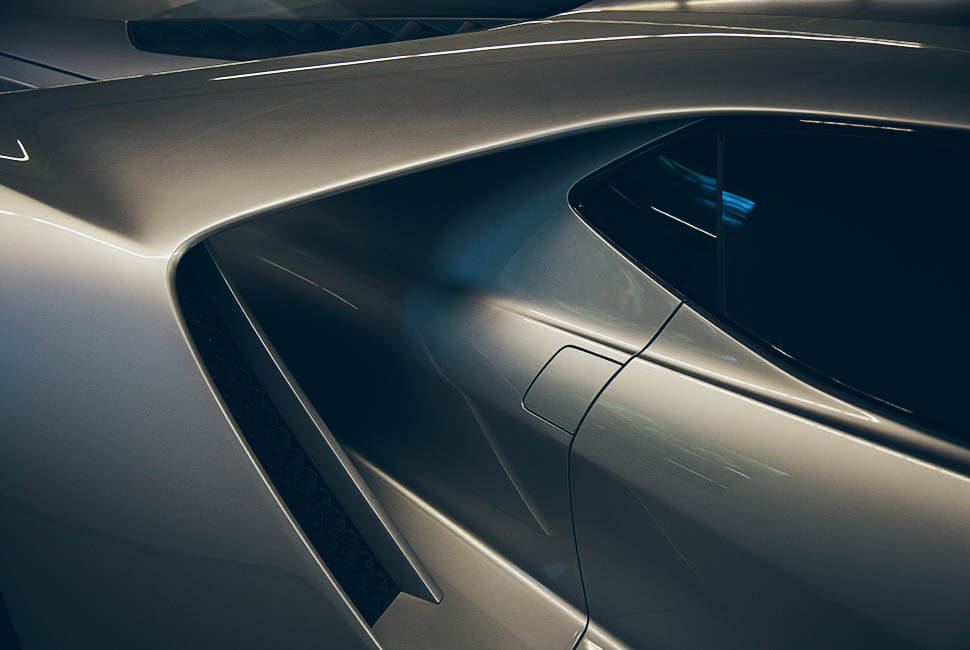 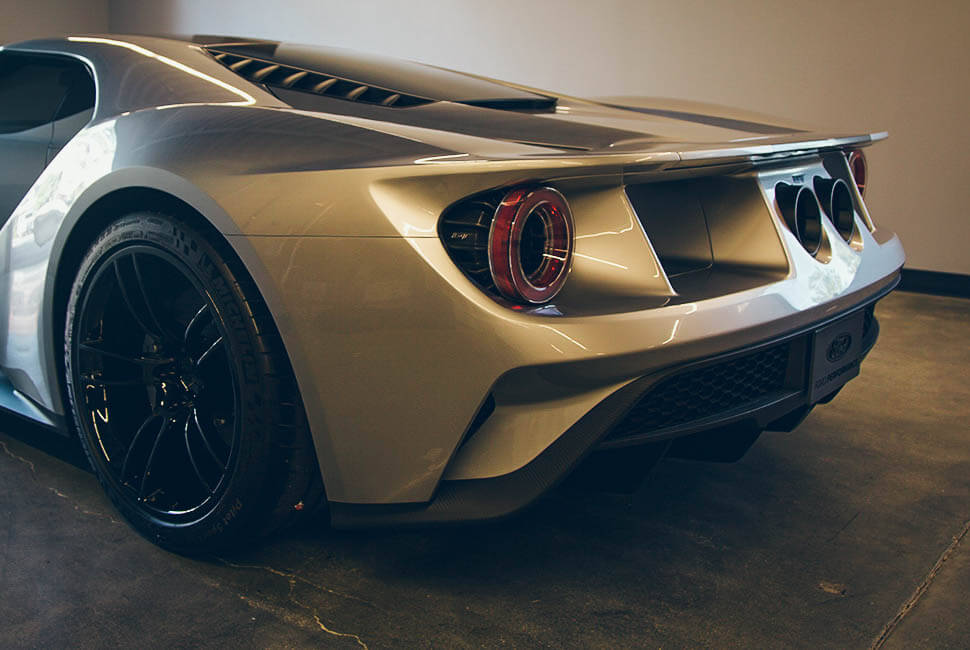 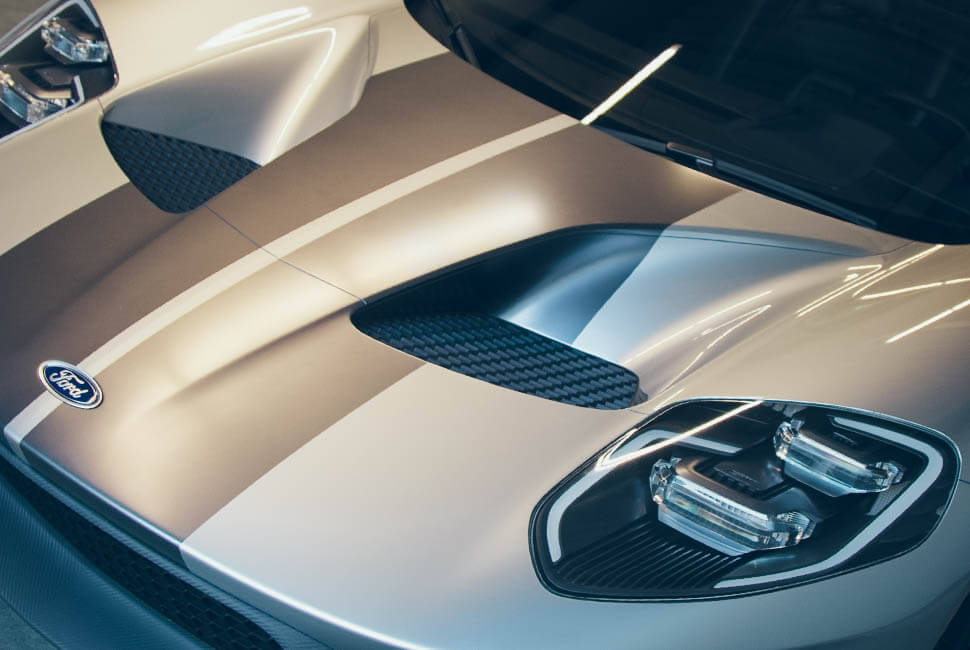 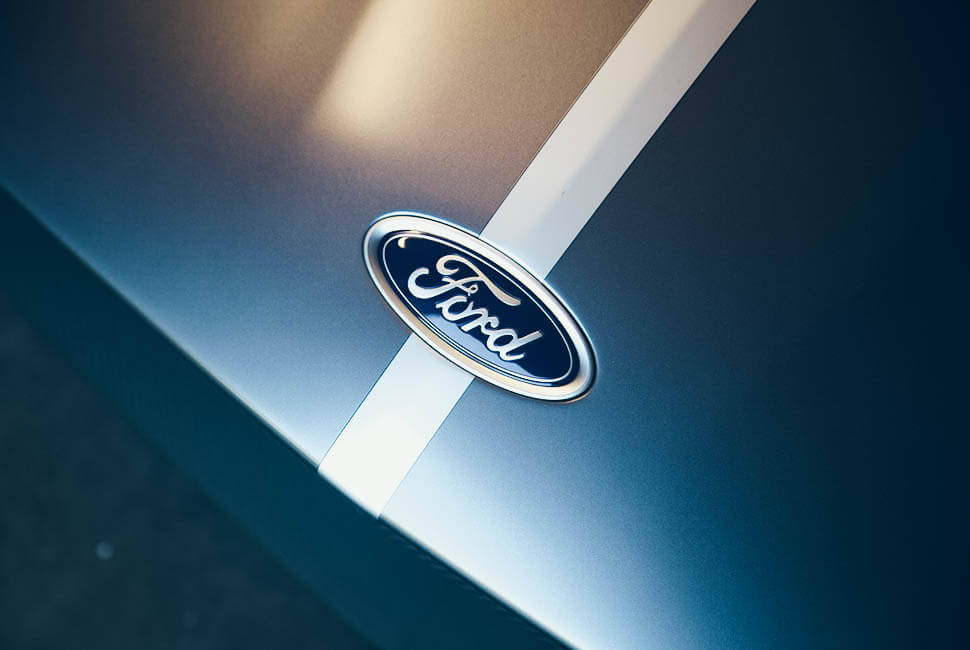 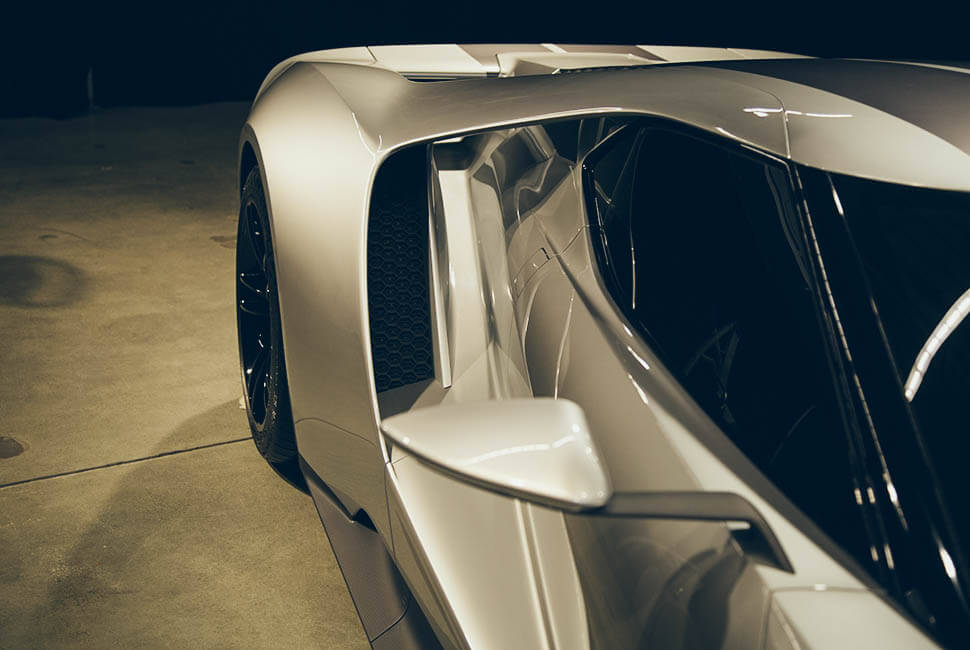 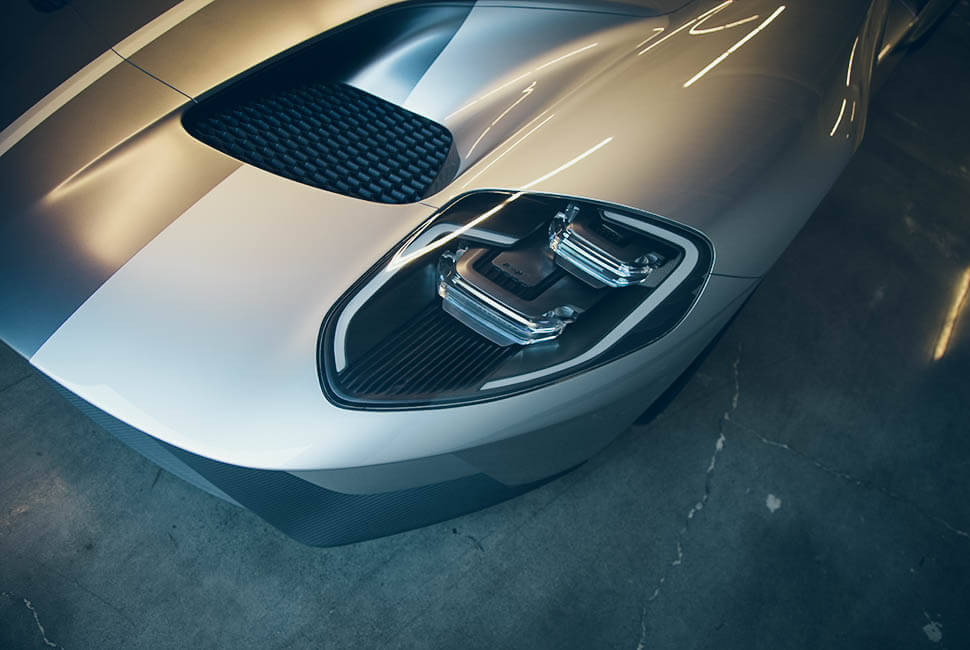 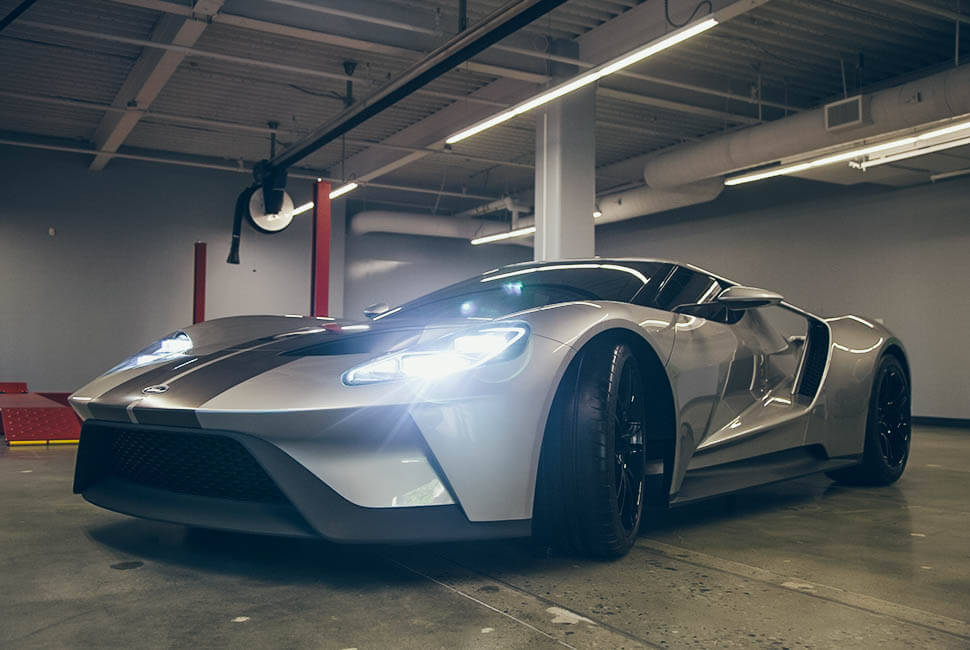 “Our meetings started after 7:00 p.m., so they didn’t show up on any calendars and ran pretty late into the night”, concedes Chief Technical Officer Raj Nair, “and we kept it in a separate studio in the basement where we even had mechanical keys, versus our normal electronic cards to get in.” By flying under the radar, the GT evaded many of the complexities that end up weighing down exciting concepts cars. Nobody involved with “Project Phoenix” (the name given to it by the few in the know), whether designer or technician, was even allowed to talk to significant others about the work being done. In keeping the project off the radar of the masses, it streamlined the production process and left the creativity unfiltered.

Decisions like leaving the tried-and-true big-bore V8 on the shelf and opting for a twin-turbo 3.5-liter ecoBoost V6 were made right away, which was crucial, as the entirety of the GT’s architecture depended on it. For those that say the GT has to have a V8 because it’s tradition — well, tradition doesn’t win races; performance through innovation does. And the ecoBoost V6 that has made its way into the new GT has already been winning races in the Tudor United Sportscar Championship. Without TUSC regulations holding them back, the new GT’s engine will produce over 600 horsepower and still return a decent MPG. The V6’s naturally slim architecture also played an important role in the GT’s staggering looks. “The cabin really tappers and shrink wraps the body around the engine”, says Chris Svensen, Ford’s Executive Design Director. “We created these channels and this allowed us to direct the air to the active rear spoiler.” A low-drag design and a powerful and efficient engine lends itself nicely to the type of endurance racing you’d see at Le Mans, so one has to wonder. But, when pried for details on a possible return to the 24-hour race (perhaps for the 50th anniversary of the famous 1-2-3 victory in ’66), all the Ford execs were tight lipped.

But, looking at the life of the new Ford GT as a whole, it paints a very encouraging picture of what an American automotive company can accomplish when it remains streamlined in production and is kept secret from public scrutiny. When left to their own devices and tasked with creating the next generation of an icon, the engineers, designers and enthusiasts were able forge something worthy of carrying on the GT name. With such world-class design and innovation, Ford once again expects world-class competition, and in production, the GT was benchmarked against the likes of the Ferrari 458 and McLaren 12C. Svensen, confident in his product, thinks the GT will give both cars a run for their money. “Next to the GT”, he says, “the 12C looks fat and lazy.”